I thought that now that the paperwork has all been signed and I have an official login for the portal and because it's about to go up in my staff bio for the camp I'm working at this summer that it is finally time to tell you what I will be doing after my teaching job ends in May and after the summer, if we are ever allowed to leave the house again.  So here goes.

This fall I will begin attending seminary.

If you are surprised by this news, let me assure you that I am too.  I was just reading back through some correspondence with a friend from August and in it I ask her very delicately and with much hedging, "So.  I've kind of been thinking that maybe I'd like to take a few classes at the seminary."

In the time since then, I have attended a prospective students' weekend, written a handful of essays, secured letters of recommendation (from two pastors at my church and from two colleagues who were quite surprised to be asked), and taken a deep breath and clicked "submit" on the application.

I told you earlier that as my chair was telling me they were not considering me for the tenure track position, my first thought was a weird kind of relief.  Prospective students' weekend had occurred the weekend before I heard about my job and I was feeling more conflicted than ever.  I knew what I wanted to do.  And I knew what I thought I had to do.  And it just didn't make sense.  Until it did.

While this realization landed relatively quickly in an intellectual sense, I am still working on dealing with the indignant rage I feel when talking about that situation.  I find focusing on the part where *I* decided to not come back as a visitor to be helpful, because that is true, and reminds me that I was not totally without agency in that situation.  Telling my chair that I would be leaving in May was the one thing that finally put an end to the swirl of conflicting thoughts that had kept me preoccupied for much of the fall and a good portion of Christmas Break.

The emotion I think of when I consider how I feel about this whole experience is gratitude.  Gratitude for my friends and mentors, who have been incredibly patient and generous with their time.  Gratitude for several of my colleagues who took this information and created an incredibly supportive environment for me during this last awful semester.  Gratitude for Ryan, who has been fully behind me since our first conversation on the subject.  My supportive family  And grateful for the church work I've been doing which forced me to get out of my own head enough to finally see what I needed to see.

At prospective students' weekend, I participated in an interview, which I was assured was a super casual get to know you sort of thing but that ended up being an actual interview, with faculty present, a note taker and an official list of questions.  I felt a bit out of place in my jeans and sneakers and lack of preparation, but at the end of the interview the faculty representative stood up and said enthusiastically "OK!  You're in.  How do we get you to come here?"  It was *incredibly* positive and was maybe one of the first inclinations I had that I was not as useless as academia had nearly succeeded in convincing me I was.

That inclination was even stronger several weeks ago when I was "working at my remote office," a brewery near my house, winding down a Friday afternoon by having a beer and doing some grading and writing work, when I received a phone call from the president of the seminary, who was calling to offer me a fellowship, which covers all tuition and books.

I composed my acceptance email in my car the next morning.

I don't know what kind of work I will be doing when I am done with school, in about three years, but what I do know is that this experience has been an absolute privilege. 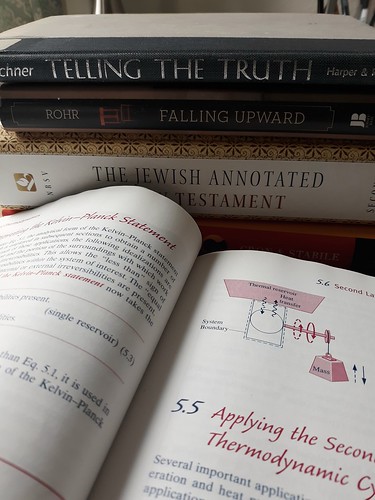 CONGRATULATIONS! This non-religious lurker is SO happy for you to have found what it sounds like you were meant to do! I look forward to continuing to read all of your updates, both your new insights and how your family adapts to the new you! 😁

OH MY GOODNESS!!! I hadn’t thought of that, but as soon as I read it I thought, “Perfect!” And honestly, the way you describe it is as close to getting “the call” as anything I’ve ever heard. I’m so excited to see what you do <3

This plot twist was both startlingly unexpected and completely perfect. I am delighted for you. And for the church, that needs you so much.

I am so happy for you.

I’m a long time lurker, but I had to come out hiding to say I’m so thrilled for you to have such a positive outcome from this mess. You are and will be a wonderful faith leader.

"I was not as useless as academia had nearly succeeded in convincing me I was."

HOLY no pun intended sh*t does this resonate. Congrats from a lurker. So glad you are happy with the next step.

May I be part of your prayer / support team?
Let me know how / when I can help.

By the way: this morning my husband and I listened to three different messages from three different clergy - all former faith leaders of ours. I wept with gratitude to be able to hear the Good News spoken by those dear, familiar voices. The option was always there - they have recorded their services and put them online - but we didn't 'need' them.
Now we need the Good News spoken by beloved voices SO MUCH.
Begin speaking what God has to say through you. What am I saying?! You already have! I have heard you do it! Listen, and then tell us what you hear. Trust that you have been chosen for such a time as this.

This feels huge and thrilling. My best friend from high school went to seminary and we joke that the church and the humanities were maybe not the most reliable areas in which to build a career. But years of reading and learning in community are never wasted. We can’t even imagine the paths that might unfold and I’m so thrilled for you to take this new direction! (Also, and still, eff the chair of your old department. It fills me with indignant rage on your behalf.)

Another lurker coming out of hiding to say congratulations! You'll bring so much to this path.

Sometimes it is hard to see God moving in our lives, but sometimes it is not. Congratulations! This sounds like something you were meant to do. :)

Congratulations! You will be a great pastor (or whatever other role you take following seminary). And seminary was the first thing I thought of you when you mentioned an upcoming professional change.

Congratulations Becca! This is amazing! I can't wait to follow along in your new adventure :).

eee! Long time lurker and I am terrible about posting comments but had to say CONGRATS. My wife is just finishing up (episcopal) seminary and is STILL not sure what the future holds for her but there's no question in my mind that this journey was absolutely essential. And was a wonderfully positive experience for our family, too. Congrats!! - Elisabeth

Chiming in late to say - I’m happy for you! Congratulations on taking a leap! And congratulations also on the fellowship, that is wonderful.