Not actually set up for this

Yesterday, our official second day in captivity (I'm not counting the weekend because Ryan was home, even though Sunday was when I really REALLY felt cooped up, because we could not go to church which is where I usually see most of my friends and also get a short break from the children), was when I really started losing it.  Despite all the craft projects and my general tolerance for clutter and chaos, being a stay-at-home parent is not something I ever really thrived doing.  Everyone is posting these awesome resources for online tours and music lessons and drawing classes and I'm just staring at the windows in my bedroom like a deer in the headlights while my half-dressed children eat cookies in front of various screens.  If it was just Spring Break, and we had our awesome annual Family Retreat to look forward to on the weekend, and if we could GO PLACES, I would be feeling a lot better.  As it was yesterday we muddled through eight hours of family harmony and then went to Sonic just for a change of scenery and an ice cream cone.  The tables were all turned upside down so no one felt tempted to get out of their cars and, I don't know, cough on each other.  By 4:00 the news was rolling in via social media that some states had closed their K12 schools for the YEAR and that's when I just COULD NOT do it anymore.  I texted Ryan to ask him to bring me a fancy pizza home and said "School could close for eight weeks and I am not OK."  He appeared an hour later, pizza in hand, poured wine in my Yeti, and sent me on a walk before handling bedtime, which from the sound of it, was INTENSE.

Today has been better, but I did spend half an hour on hold with the pediatrician because I was starting to feel a little negligent in the way I've been patching James along since Thursday with his wheezy cough and junkiness.  I was hoping they would tell me what to do with him over the phone but apparently they like to actually listen to kids that have a history of wheezing before passing out the steroids.  When we went to the pediatrician we had to wait outside in a tent before a nurse in full PPE guided us through the carefully labeled "sick hallway" to an exam room.  The verdict is to keep patching him along.  Headdesk.

One other thing I've learned about myself in the past forty-eight hours are that I have a toddler-like need for routine, regular meals, and predictability.  Given the personal life events of the past six months, apparently routine and at least an hour of quiet thinking time a day, and a few reliable opportunities for social/funtime were what was keeping me from going off the deep end.  Now that those things have all been taken away, well, buckle up.

How about some pictures?

I made commemorative sugar cookie squares on Sunday. Ryan thought this was a little inappropriate. 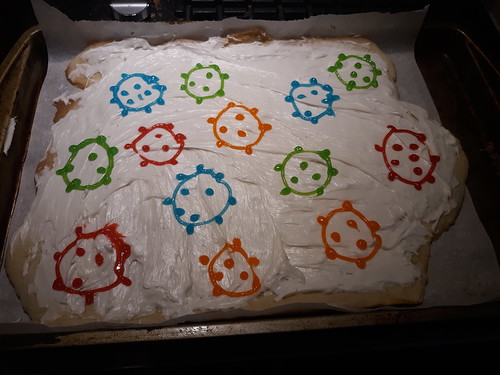 Church has been moved online, but Wes was scheduled to acolyte on Sunday and did not want to miss out.  Lucky for him he lives in a family of liturgy nerds and we were more than happy to set him up.  My only regret is that we do not have a purple table runner, which would have been more appropriate for Lent. 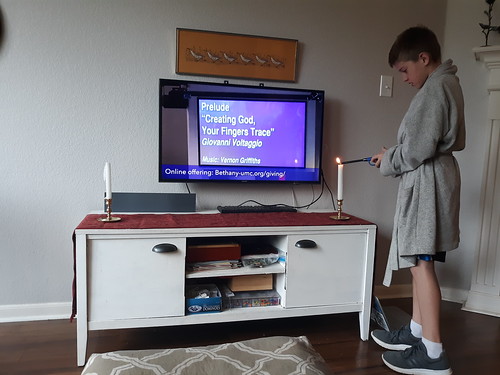 Monday afternoon I dragged all the cardboard out of the recycle bin and provided them with duct tape and instructions to build a marble ramp down the stairs.  This killed a good ninety minutes and made an unimaginable mess. 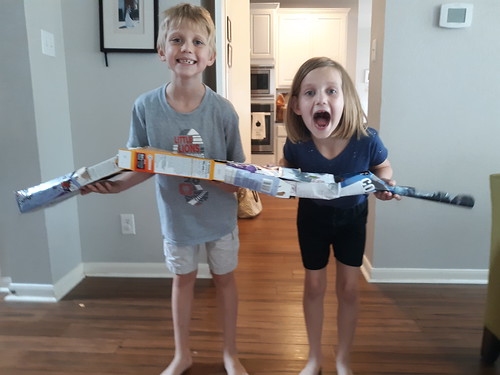 Here is James eating boxed mac and cheese out of a pot while sitting on a lounge chair in the front yard. 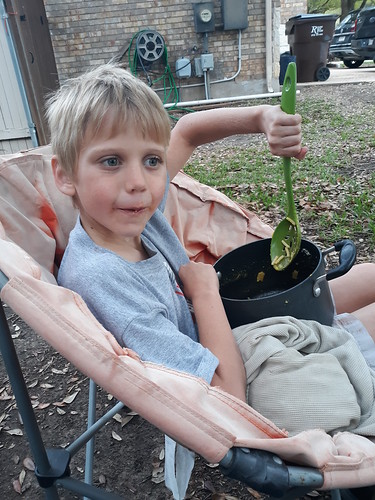 Oh and look!  I made everyone practice math yesterday!  Shortly after I posted this gloaty picture to Instagram he stomped out of the room and slammed the door. 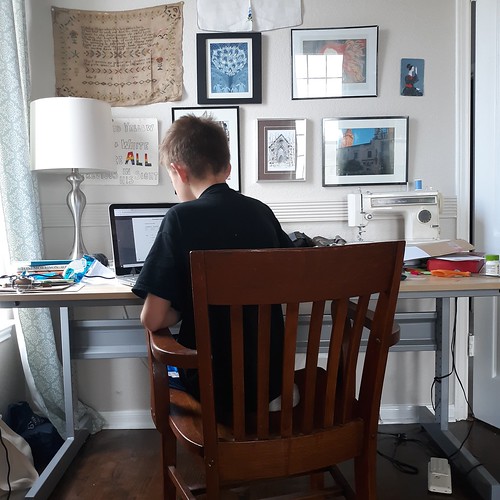 At least for now I don't have to manage my classes yet.  That won't happen for another week and a half.  In theory I would be setting all that up right now, but also there are FOUR BORED CHILDREN in my house and Ryan is at work and that all makes it a little bit tough to drop into the zone and GSD, you know?  Sigh.  Onward.
Posted by Becca at 10:41 AM