On Tuesday afternoon around five I ensured Ryan had a restful end to his work day by texting him this little nothing "I don't think we should take these kids to church tonight. Or anywhere. Ever again." And he responded immediately "Would you rather go alone or do you want me to be the designated driver?" Which, if you are in the need of husband tips, is officially my favorite text ever. It gave me just enough mental space to power through the last sixty minutes of imposed SAHM-ing, make dinner, and be willing to take all the kids to church for the Thanksgiving service.

Thanksgiving Break always starts with two days of school break/non-break overlap funtime and while I have the freedom to bring them to campus with me, it is NOT good settle into the zone and get lots accomplished time. My mom took the little two all day Monday, though, so I only had the big two and it was kind of awesome because really all I did was give them my university ID and twenty bucks and told them to check in once an hour. They checked out books, rode our community bikes, ate lunch in the dining hall, and relaxed in the hammocks, and then appeared right on schedule in the hallway outside a meeting I needed to attend. I knew they were there because when the meeting ran twenty minutes over they started loudly whistling the Jeopardy theme music through the door. #professional Anyway. Big kids are kind of awesome. The next day was similar, except they were also responsible for Mary (James was at a friend's house), so they stayed closer to my class. It was kind of a lot.  I sent Ryan the above text after stupidly attempting to half-ass a family Christmas picture.  A random sample: 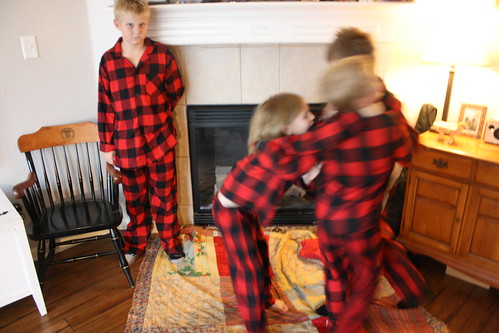 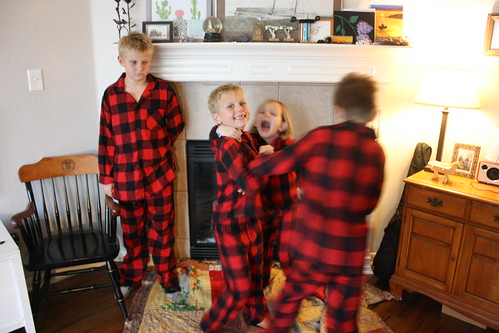 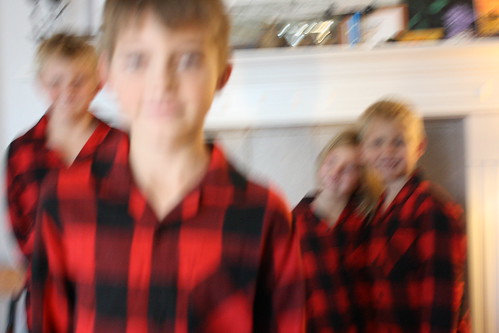 After that I dropped Charley and James off at swim practice and then took the others home for magical cookie making time. 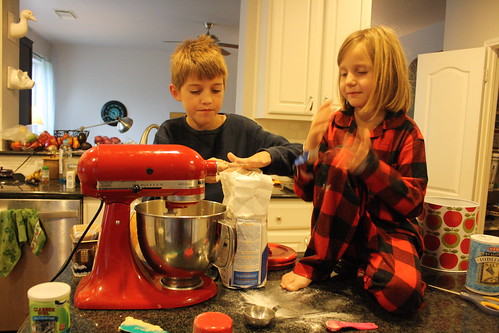 I'm glad I did rally and take them because there were multiple moments of hilarity that night.  During the children's message when our pastor had the kids think of something they were thankful for for each letter of the alphabet Wes said "C for Charley."  And then at the end Charley and Wes vanished from the sanctuary in search of the coffee hour in the fellowship hall, forgetting that we had no idea where the fellowship hall actually was in that church.  We found them a short time later drinking lemonade and eating cookies like NBD.  On the way out Charley asked me if I had tried this particular kind of cookie and when I said I hadn't, ran back inside to get me one.  On his way back out he stopped suddenly and then pointed out a big crack in the sidewalk to an elderly woman coming up behind him with a cane.  She then TOOK HIS ARM and they walked together all the way to her car.  We continued the "What are you thankful for" game on the way home and Mary hit the freaking wall and started screaming at all of us when it didn't go her way.

Wednesday the kids wanted to go to the science and nature center, which is one of our favorite places, and is also free, so we packed up a picnic and planned to spend the whole day down there. Oh man, it was perfect. Dug in the sandbox, looked at the reptiles and spent a ton of time in the birds of prey exhibit, then went down one of the hiking trails and found some terrifying cliffs to climb. 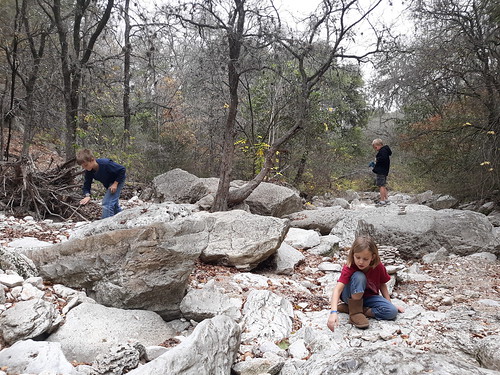 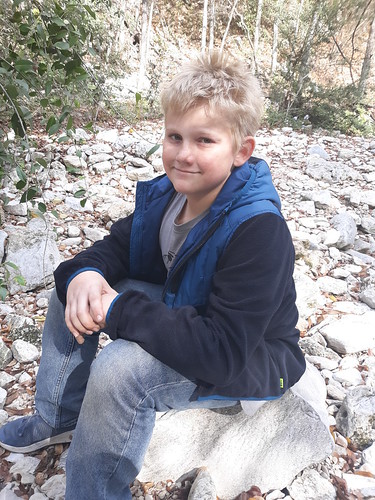 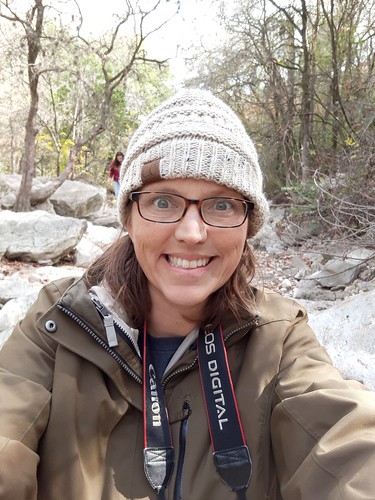 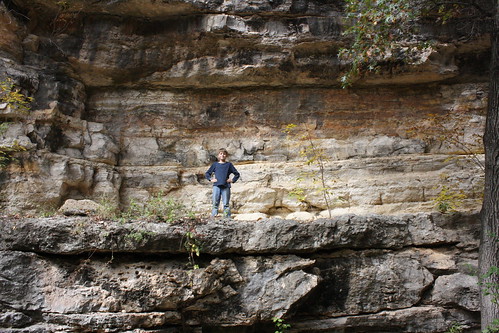 And then they found this absurd cow skull in the woods, which the kids now cherish with every fiber of their being. 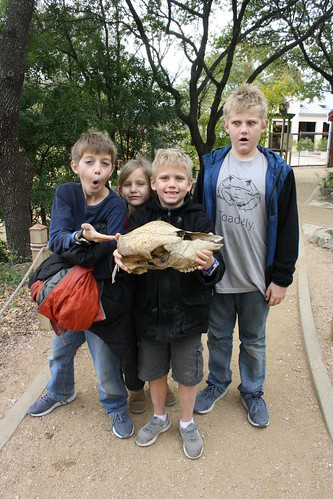 We stopped for hot chocolate and the library on the way home. 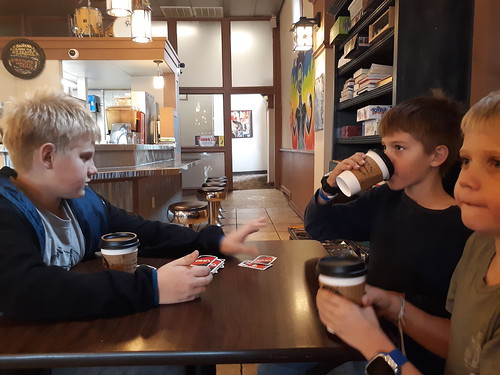 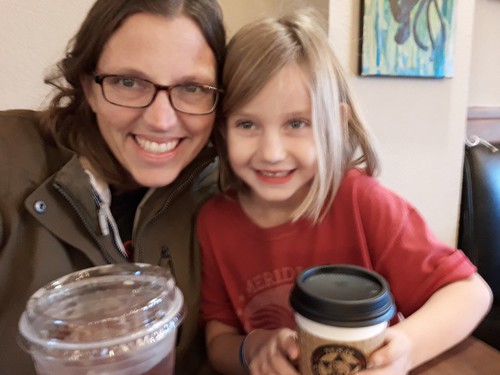 Wednesday night Ryan and I made four pies and eight pans of cinnamon rolls, so that was intense.

Ryan and James got up early to run in a race and the rest of us watched TV and ate cinnamon rolls in our PJs.  This was easily the highlight of James's life. 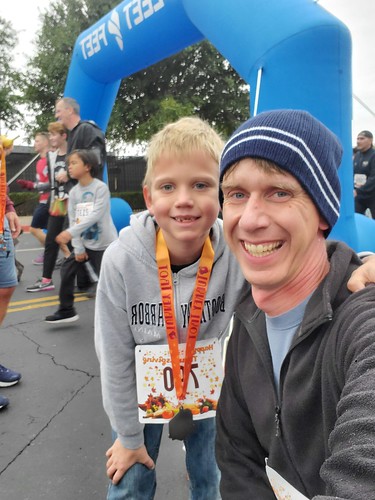 And then we spent the rest of the day having a wonderful Thanksgiving at my parents' house with lots of family and yummy food. 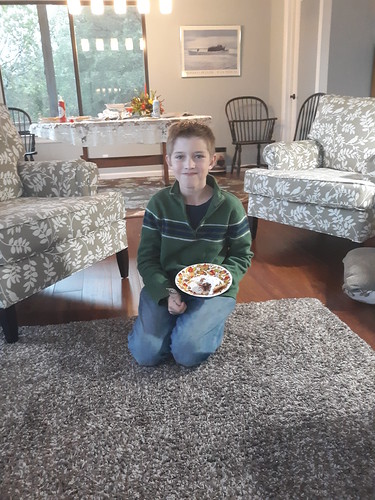 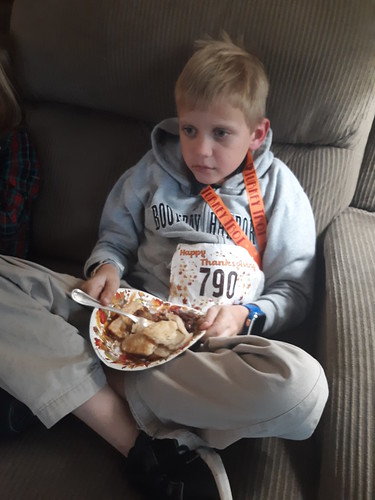 We took the ABC game over.  Mary was delighted to fill in a worksheet.  She really does miss school over breaks. 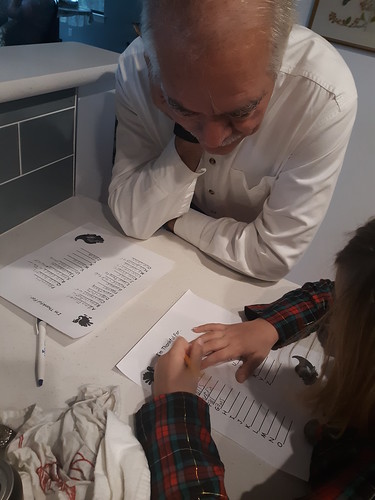 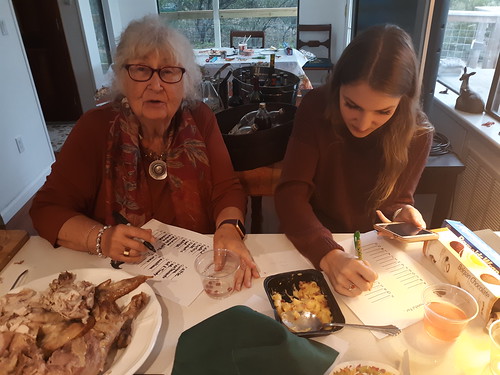 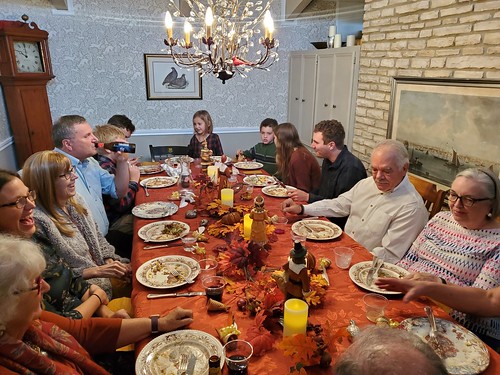 We stopped to look at some Christmas lights timed to music on the way home and when, after that, the entire family except for me began whistling a psychotic version of the Coldplay song the lights were playing (at the same moment a car almost backed into us and I could not move because not only was my engine off, a kid was hanging bodily out the back door) I not-so-calmly remembered that I should ask Ryan for a couple of hours of time alone tomorrow instead of sniping at everyone over every little thing for the remainder of the drive.  I had to apologize when I got downstairs after bedtime to find that Charley had thoughtfully put all the leftovers away in the fridge and gotten himself ready for bed.  They really are pretty great people.  Even if they are the NOISIEST people.

Now we have three days of family togetherness where there will be (hurray!) TWO adults.
Posted by Becca at 7:46 PM