*Enjoy this PSA called "When you finish a project, clean up your files and make yourselves some notes so you don't have to reinvent the wheel forty seven times when the reviews come back, DUMBASS."**
**I should be doing that right now shouldn't I?***
***Meh

Sometime last Thursday I realized that since I would be away for yet another weekend that I would need to do a few things that night to prepare, like write an entire newsletter, finish the revisions on a paper I'd been anxiety-avoiding, and prep for two classes (Friday and Monday).  This was not a happy realization but one I really should have had a long time before that point given that my responsibilities really do not change that much from week to week.

(I'm just realizing that I forgot to tell you that I went on a work trip to Minnesota the weekend before last--it was excellent, as my October trip to Minnesota to learn about Matlab always is, but this time I had a few more responsibilities in my facilitator role and it was exhausting.  Got back at midnight Tuesday, taught eight and a half hours later, went to choir, muddled through some piddly work tasks, had kid fun, collapsed in a puddle.  I'd show you pictures of that trip but the only pictures I took were of the front of a church I thought was pretty, a house with books all over the porch, and of me saluting an Irish fiddle band with a pint of stout.)

Naturally only some of that got done (I planned class and wrote the newsletter and spent a lot of good time staring at my computer in anger) and the revisions were put off until sometime in the future.  Fortunately I had a couple of hours of downtime each night on the retreat I went on this weekend and also there was no TV in my room so I cuddled up with Matlab once again and powered through until I couldn't keep my eyes open.

(I should mention that this particular hell was of my own making, since the reviewer asked me to change the font size on the graph (among other things), not, like, redo the entire analysis, and it therefore would have been easy if I did not have to waste time reimagining what the me of six months ago was thinking when she created four versions of the same Matlab code, with very subtle differences, that called on four different versions of every function I wrote, and that used datasets with names like "HoustonCompositeDetrendedTHISONE12.txt")

Which is how I found myself today after class sitting down for what I thought would be a simple last pass through the revisions.  Other than a faculty meeting, I was glued to my desk all day, working in a heightened panic, slapping everything together, finding (AT LAST), the piece of code I was missing to make everything just right (it was in a different, but nearly identical, directory from the one I'd been working in), and finally went to submit it at 3:20 (had to leave to get the kids at 3:30), to find that instead of just replying to the editor's email I had to wade through the crazy paper management system (we've handled reviews by email before) which took some trial and error.  Clicked "Submit" at 3:31, ran to my car and peeled out of the parking lot and by some gift of the universe I had enough time to put gas in my car (45 miles left in the tank!) and go to the bathroom (for the first time since 7:00 that morning) before getting the kids, screeching across town to piano, taking the other kids to the grocery store, and then heading home to make dinner.

Bedtime is done now and Ryan is at a meeting so obviously there are cookies and wine and a book.

And strenuously avoiding the topic of the silly but labor intensive holiday coming up on Thursday. 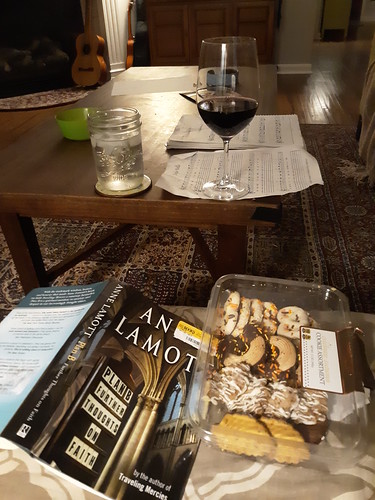