One day when I was feeling restless this spring I planned my childhood fantasy sea kayaking trip in Maine online, plugged all the details into a query form on an outfitter's website, and pushed send.  It couldn't hurt to find out, right?  I assumed it would be prohibitively expensive and that they would say Mary was too young (even though I rounded up to six, which I felt like I could do because she is tall and articulate and will be six in just a few weeks), but a few short hours later an email popped into my inbox with a very reasonable per-person quote and an assurance that "usually we like kids to be at least seven, but six could work probably."  So I sat on this knowledge for a few weeks until Ryan innocently asked me what I thought we should do for our fifteenth wedding anniversary.  "Well..." I began.  "I looked into what it would take to take the family on a three day sea kayaking trip through Maine's islands, and this is how much it would cost per person and this is what it would include."  This strategy proved to be far more effective than the time I texted him "Let's go to Puerto Rico for fall break!" at ten AM on a Monday morning, because he immediately said "Sure!  Sounds great!"

You might be thinking that something like this would require a longer conversation, but if we waited to make decisions until we had time to adequately talk them through then we would never do literally anything.

I was initially incredibly excited that we were going to be doing this as I continued firming up our arrangements with the outfitter.  About a month ago I began to quietly panic that we were doing something dangerous or foolish or traumatizing to the kids.  My hobby became reading things on the internet about taking kids sea kayaking and it sounded reasonably doable, except that some of our kids are on the young side and also you can die from hypothermia in Maine even in the middle of July.

Finally, Saturday was the day we were to leave Portland with a few extra pairs of underwear, a ton of fleece jackets, and like nine bags of groceries.  We had found small aluminum trays (originally designed for escargots) to use as our camp dishes, brought a backpacking stove from home, loaded up on sunscreen, and made sure everyone had water shoes.  I took very seriously the strident warnings on the website to WEAR NO COTTON, lest we all succomb to hypothermia in the middle of July, and found the kids all wet suits.

I was determined to not be high maintenance or ridiculous and was extremely proud of myself when our guide, Joe, told us we were "light packers".  Though--he told us we were light packers before he got out the gear we were borrowing, which was six sleeping bags, six sleeping pads, two tents, six kayaks, six life jackets, six paddles, and six spray skirts.  Once THAT pile was amassed, it was clear we were squarely in the ordinary zone when it came to packing.

Squeezing all of that into dry bags was a PROJECT. 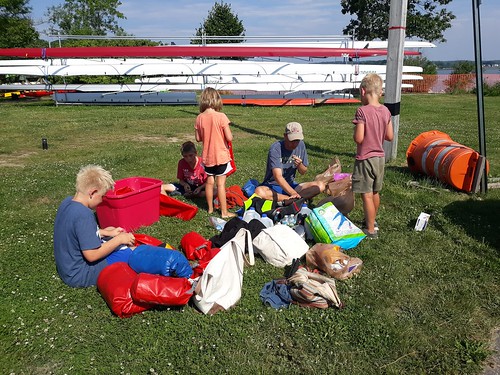 A confusing project that led to the discovery of an entire dry bag with a single box of granola bars inside and a situation in which none of my clean clothes showed up until bedtime on the second night. 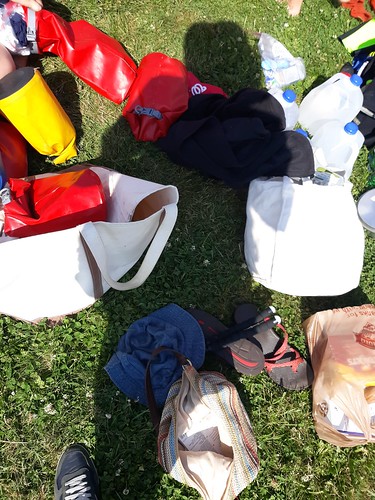 As part of our rental, we had a guide who planned our route, taking into consideration things like tides, wind, weather, and our SUPER NOVICE skill level.  He stayed with us the entire time, camping with us, eating with us, paddling with us.  This was enormously reassuring whenever I started feeling nervous about the trip, and it also ended up being a really wonderful part of the adventure.  I mean, the kayak guide randomly assigned to our family WAS AN ACTUAL THERAPIST what could be better than that?  He was kind and patient and so, so nice to the kids.  He bought us s'more stuff and made fires.  He shared his granola bars and peanut butter with us and pointed out all the best places to go to the bathroom behind rocks on the beach.  He had a first aid kit that came in handy when James broke out into a crazy rash and when Mary scratched her leg on a rock. He also knew what the heck he was doing and planned a route that took us to our island campsite with plenty of time to set up the tents before the giant thunderstorm came (more on that later). 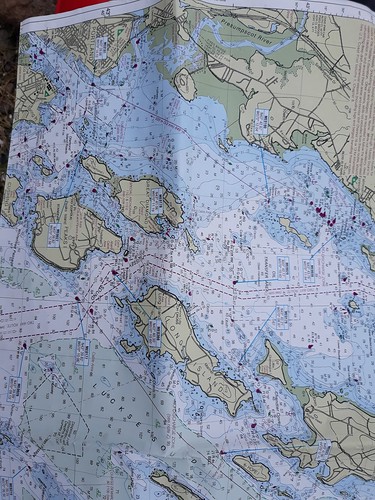 We took one last picture before we left and then it was into the water for a quick how-to on paddling.  The rest we figured out relatively quickly as our first job was to cross a busy harbor on a holiday weekend.  The waves seemed huge and scary, but we were told to just paddle straight into them and let the boat take care of us.  It worked and we were all surprised.  After that everyone loved it when a giant tour boat blasted in front of us and made a huge wake. 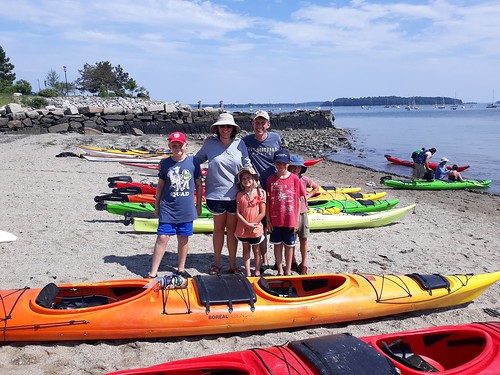 The first place on our trip was Fort Gorges, an island fort near Portland that was built sometime after the Civil War.  It was a massive granite structure sticking out of the water and we could not believe we were getting to stop there.  Pictured below: kids with pied piper/kayak guide. 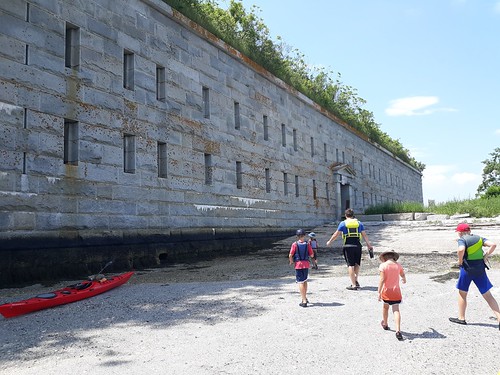 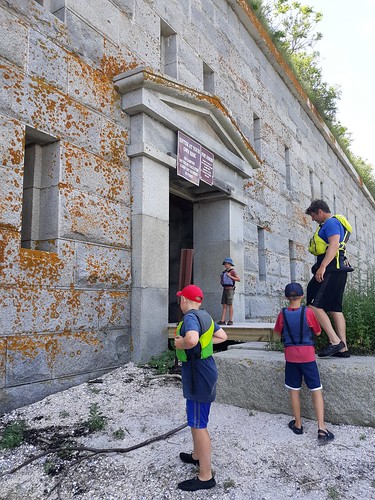 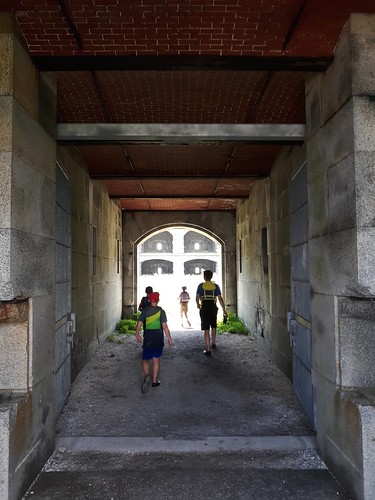 We charged right up a winding granite staircase through a tower on one side of the courtyard, examined several dark rooms, wound our way around the second story of the fort and up onto the roof, and checked out the largest gun made during the Civil War era, which just happens to be lying on top of an abandoned fort in Maine. 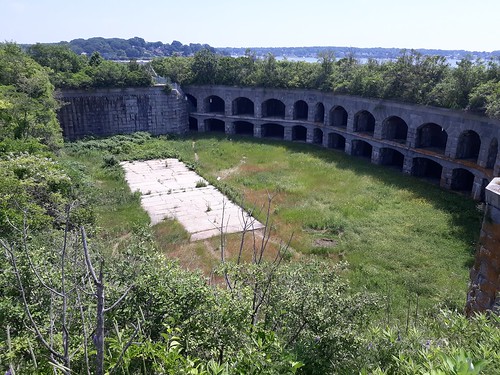 There was also a very pretty view. 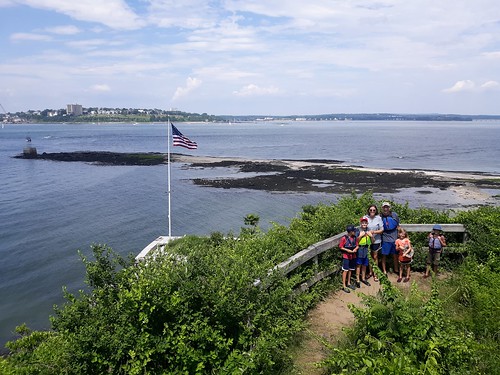 We stopped for a quick lunch after another hour or so of paddling, this time on a sandy strip of beach on Peaks Island.  Our lunch supplies were still plentiful so we had apples, bagels with peanut butter, almonds, craisins, and pepperoni.  This is our usual backpacking/camping lunch and it is easy, quick, and cheap and also being good for energy and morale.  We ate the same thing the second day but added gummi bears because I like my troops to be delighted. 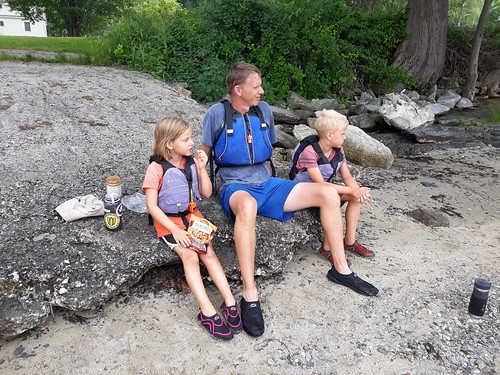 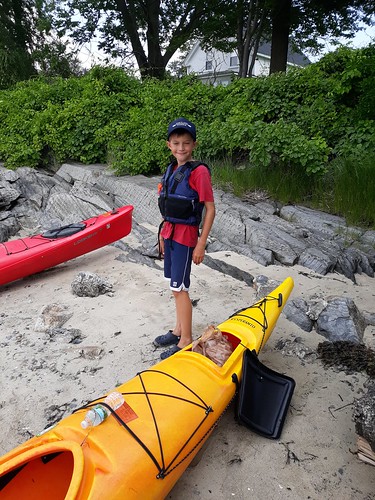 After lunch Joe tethered Charley and Wes's kayak to his because he wanted "to get across this next crossing as quickly as possible because it's super rough and there are tons of boats."  He was NOT WRONG about the chop and the wind and the boats.  I was struggling to keep up in the back and Mary was VERY nervous about the waves and the gathering storm clouds and the fact that the other kayaks were getting further away from us.  She responded by shutting down and not paddling at all, which was problematic given it was just me paddling an enormous tandem kayak loaded down with water and camping equipment IN ADDITION TO A FREELOADING CHILD.  Not wanting to make an embarassing scene, I tried singing to her to calm her down.  This worked well, and by the time we made it across (a good football field behind everyone else), I had made it through most of the United Methodist Hymnal and about half of Simon and Garfunkel's body of work, all while paddling as hard as I possibly could.

After that harrowing musical adventure things got easier for about half an hour before the thunder started and we had to make another crossing.  I was hauling ass across the channel when a kid Charley's age pulled up in a lobster boat to tell us that a huge storm was coming.  We kept going towards Little Chebeague, the island where we were to camp, to the sound of thunder becoming more insistent behind us.  Finally, we landed at a campsite and quickly set up the tents and dragged all the sleeping things and food inside.  That storm ended up passing by to the south of us with nothing but a bunch of thunder and a few raindrops.

The campsite was stunningly beautiful, right by the water on an uninhabited island.  The island had a latrine and a fire pit, both of which were great to have during our stay. 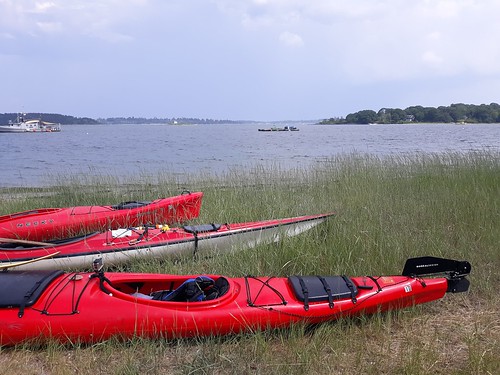 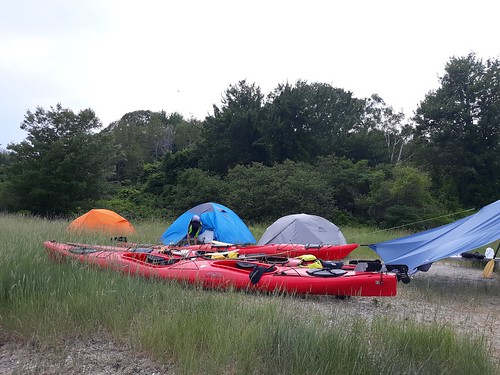 Ryan and Joe took the boys for a walk around the island and I spent some time looking around the campsite and checking out the map before going into my tent to lie down with Mary for a few minutes (Mary CONKED OUT the moment we got the tent up) and when I went back outside, there was a massive shelf cloud was approaching from the west. 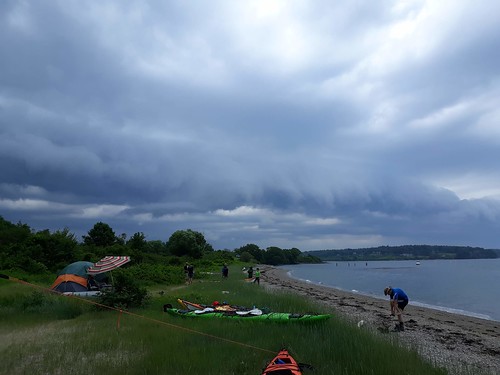 Not knowing where anyone was I just zipped Mary and myself into the tent and hoped for the best.  Soon, the kids and everyone came back and we all hunkered down.  The storm was NASTY, with numerous close lightning strikes and torrential rain.   After an hour of this we peeked out of the tent to find the environment completely changed.  The rough water we'd paddled through was a glass calm, the clear skies had been replaced by a deck of clouds, and a layer of fog hovered just over the surface of the water.  The temperature was twenty degrees cooler than before and the tide had gone out leaving a wide expanse of beach. 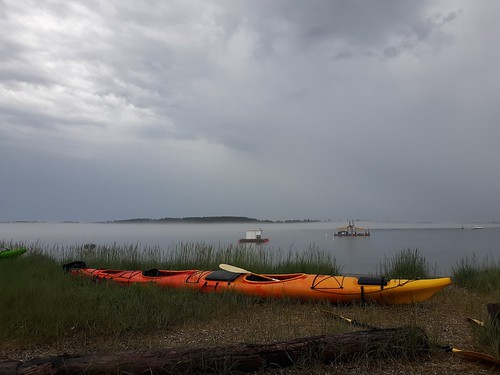 Joe made a fire out of driftwood and some dryer lint he carries for the purpose and we made dinner. First night's dinner was naan pizza, a favorite of mine--naan rounds with either pesto or tomato sauce and Babybel cheese torn up on top. Wes likes pepperoni on his. The fire warmed us all back up and then it was time for bed, which meant squeezing into our cozy tent for four (Ryan, me, James, and Mary; Charley and Wes were in their own tent). Mary fussed and kicked for the first hour or so and then finally dropped off and we were all so exhausted it didn't matter that we were squished and no one had a pillow.

And this has already gotten much longer than I anticipated--because I want to remember every single detail--so I will break it into parts!
Posted by Becca at 7:53 PM

What an amazing adventure! You guys are seriously the coolest

This is SO COOL! What an amazing vacation!

I am a long-time reader and lousy commentor but live in Portland and LOVE the trip to Fort Gorges. So cool that you all did this! - Elisabeth