The pool: we live there now

I already knew this but you all are the best.  So much lovely online and in-person feedback from that last post!  Mwa!

And the trouble with writing a well-received, heartfelt post is that there is pressure to now try to make all of them at the same level and if you have been a longtime reader then you probably already know that consistent writing/content level is not one of my strengths.  #goodatotherthings

One thing I will tell you is that my children are benefiting tremendously from the fact that I feel guilty and wistful about having to work this summer, so they are having a really freaking magical time.  It helps that I found a LITERAL Mary Poppins on care dot come who on her first day provided a calendar with detailed entries about the fun things they would do every day.  She is one of my favorite humans and I'm trying to find the right moment to ask if she would like us to adopt her.

Because she endured rush hour traffic with a carful of overtired kids on Monday (on their way home from a museum, which they stayed at for two extra hours because they were having such fun) I bought them movie tickets for today.  I bought them for the theater that's also a brewery and told her helpfully that if you write "bring it after the lights are off" on the order card the waiters are very accommodating.  But I think she's only twenty.  Maybe she will order a milkshake instead.

I've got about a hundred pictures of the pool with various kids' heads sticking out of the water in various stages of various strokes. 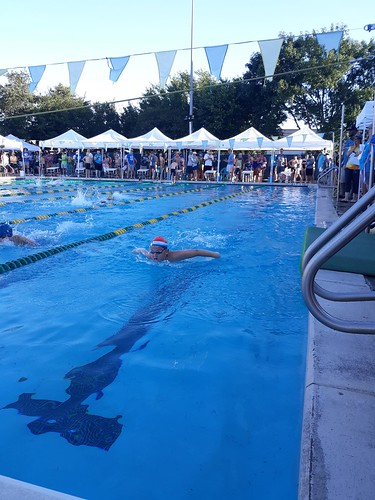 And eating things at the pool is our new hobby slash lifestyle now. 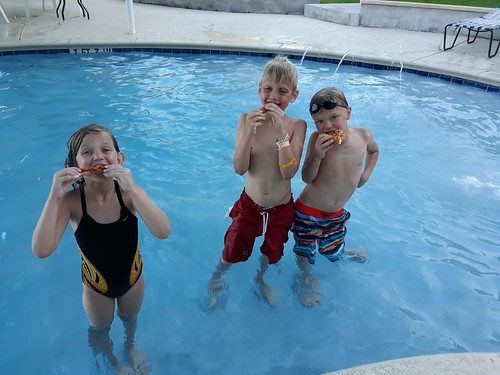 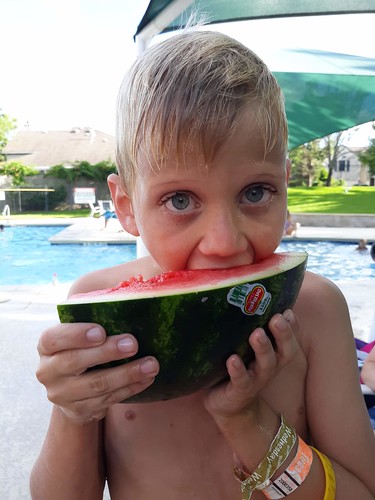 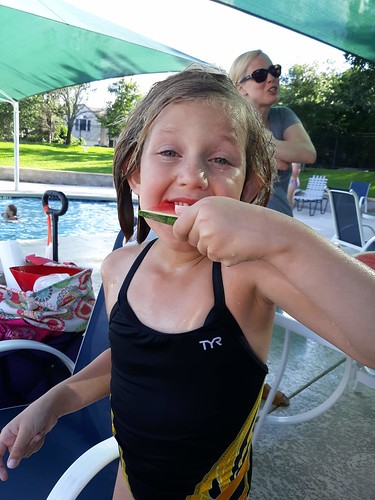 Charley had a meet for his year-round team one evening last week and a giant storm came through right in the middle. I saw the gust front approaching and noted it on the radar and was just hoping it would hold off long enough for him to swim his second of two events. 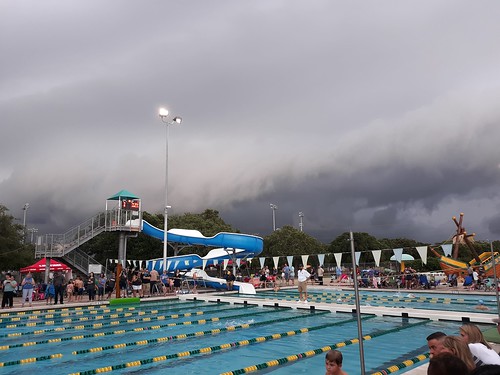 Unfortunately about six events before his last one it started raining torrentially. Charley and I stood in a breezeway filled with people waiting to see what would happen and surprisingly they continued the meet like nothing was happening, probably because there was no lightning. It was POURING and they kept calling swimmers up to the blocks. As it got closer to Event 26 I made Charley go stand by the blocks because I couldn't hear the announcer over the rain. We both stood out on the deck until his event and then booked it back to the car, which was sitting in a six inch puddle of water. 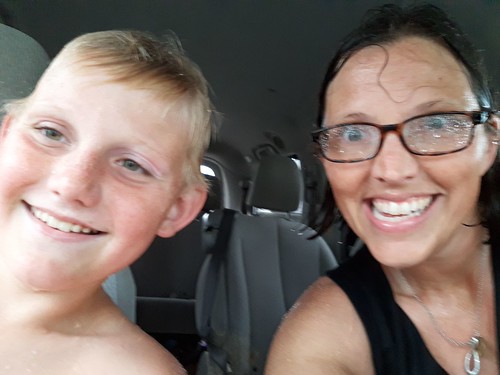 Saturday after the meet we were all dozing on the couch and floor in front of Star Wars when I remembered that I had signed the kids up for Kids Night Out at church that evening. Everyone was completely exhausted and I had serious misgivings about dropping them off, especially because Charley is WAY TOO OLD to be hanging out in church childcare, but it's been a long time since I've gotten to have an uninterrupted conversation with Ryan, so we packed the kids into the car, loaded Charley down with the incredibly dark fiction he favors, and went for it. Ryan and I went to a brewery to relax and play board games while drinking craft beer and eating pierogies stuffed with bratwurst and also something called "brachos" that is nachos covered in bratwurst. Perfect evening, really. 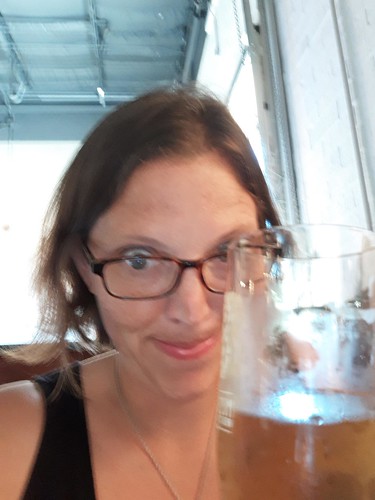 And when we arrived to pick them up Charley was patiently explaining something to our friend's five year old and the other kids were watching movies. One kid perked up when he saw us and exclaimed "Come see the train track I built!" (!!!) Then the nursery worker handed me a bag of clothes and said "I don't know if you knew, but Mary came here in a wet bathing suit. We gave her something dry to wear." JUST LIKE OLD TIMES.

I will leave you with this: Yesterday at rowing I was part of a conversation in which a guy was talking about visiting Beyonce's family in Poland. He and Beyonce's dad did vodka shots after dinner and it was weird but they had a great time. Friends, it took me at least ten minutes to realize that he was talking about visiting his FIANCE'S family, not BEYONCE'S. Of course that made way more sense. Listening comprehension is hard.

I want more posts! (Though personally I like your complain-y posts far more than your earnest posts, but that's just me, a whiny complainer through and through!)