I am proud of my kids and try to highlight their accomplishments and often I hold back (People who follow me on social media are like "Yeah OK you hold back") because I've often felt a pang of jealousy around school award season. "Survived sixth grade" should be an award, but it is not, for some reason. That shit is hard.

(Other awards that might be relevant to my family: One Week Without a Concerned Email from School Staff!, Brought Lunchbox Home 3+ Times!, and Resolved Interpersonal Conflict Without Swearing!)

We've tried sports before. Soccer was a no-go because the whistle was too scary. Tee-ball was too confusing. Kinderdance was too adorable and not as rigorous enough to justify the time commitment (for us). We've been pretty commitment phobic in the past I was never sure we'd actually be able to leave the house on a given day. Who would be losing it. Who would be sick. What nightmare scenario involving a call from the school had unfolded earlier that day.

We had a particularly tough school year beginning the year Mary was born until the following fall when we finally settled on the magic combination of meds and therapy for one of the kids that allowed to live as normal a life as we were ever going to live. I was intentionally pretty quiet about that part of our lives on here both for privacy reasons for the kid involved and also because it was REALLY EFFING TERRIFYING.

Then we made it through that and kind of hummed along for a while, navigating lots of support at school and managing the business of the rest of the kids. That was fine, but organized activities and sports still seemed out of reach. There was too much we couldn't predict. Too many unknowns. Things could go dark in a heartbeat and none of us really ever felt like we could relax. That made signing up for an eight week baseball season, or soccer, or karate seem overwhelming.

Things started to improve and then we had a Situation with another one of the kids and his teacher that plunged us right back into that world, now with a bonus dose of PTSD from the last time. Once again we got therapy on board and meds figured out, thanks to our AMAZING psychiatrist, whom we refer to as the Med Ninja, who has done entire sessions with us on the phone, at night. That was last summer and since we hadn't seen that coming, we had already taken a deep breath and signed the kids up for swimming.

As you probably already know, swimming has been LIFE CHANGING for our family.

It's fun, of course. While they wait for their turn to practice they run around with a familiar crowd of kids on the playground, filling their caps with water and throwing them at each other, playing a scary game called "Groundies" which involves running around on the playscape with their eyes closed, and eating TOTAL GARBAGE at every opportunity. Meets are a crazy circus, with more friends, unlimited screen time, more junk food, and occasional races.

But during practice, you guys, they work SO hard.

The boys all have an hour-long practice and swim hard the whole time. On Adventure Day they make an obstacle course that combines swimming and things like doing lunges all the way around the pool, tricep dips on the benches, relays, and the diving board. Mary, who spent one of her first practices sobbing "I don't want to drown!" on the side of the pool, now swims a forty-five minute practice filled with laps and kicks and figuring out how to get your face to stay in the water without almost dying (on her adventure day one of the stations was "crazy dancing").

All the kids have surprised me this year with their focus and competitiveness, which somehow has not turned into anger and frustration like I had feared. When another boy in Charley's 100 IM won the heat so handily that he was out of the pool before the other kids made the final turn, Charley just smiled and said "That's Danny. He's on my year-round team too and he is AWESOME. Nice guy, too!"

(Also, the 100 IM is Charley's favorite event, which is confusing and mind boggling because that is kind of an intense event, you know?)

We first had an inkling last year that maybe this was the sport for us when Charley won a heat in the 25 free at a meet late in the season. We had spent the whole season having a blast, enjoying the kids' positive attitudes, but not really expecting them to stand out from the pack, since this was their first year, and because of all of the above, having generally assumed we'd be people who excelled at other, non-sporty, things. But when Charley started pulling away from the group with ten yards left to go I started screaming. And when he out-touched the next kid in line at the end of the heat I shouted (involuntarily) "HOLY SHIT!" and turned to face Ryan for a giant sweaty hug with snot and tears running down my face. Ryan said "I'm going to text my entire contacts list and say 'My kid is good at a sport!'"

(Charley's butterfly still almost makes me cry every time. Yes, I know how ridiculous that sounds)

Saturday we had a meet in the neighborhood I went to high school in. In fact the pool was about a block from my old house. My parents used to walk over and buy breakfast tacos from the meets even though my sister and I didn't swim.

And it went really really well. James won his backstroke heat, coming in tenth overall in his age group. Mary is getting better every day and even added in the arm piece of the backstroke a couple of times. She had time improvements in both her events. Wes has a ferocious freestyle that I ADORE watching. And Charley had a great 100 IM.

James swam up in the 9-10 boys 100 relay and SURPRISE! He was on Wes's relay team AND they were on the same side of the pool AND James was the anchor. This scenario was RIPE WITH POSSIBILITY for an embarassing and public brotherly conflict but fortunately they managed to hold it together and James swam for his (literal) life on that last leg and absolutely held his own. He even gained some ground on one of the other swimmer and a kid from the relay team (not Wes, naturally) told him what a great job he did.

So I'm going to brag about my kids, both because I'm so proud of them for their hard work, and because I am DEEPLY grateful to their coaches and all the parent volunteers for making this experience so positive for them.

Opening the family folder this morning was the best birthday present ever. 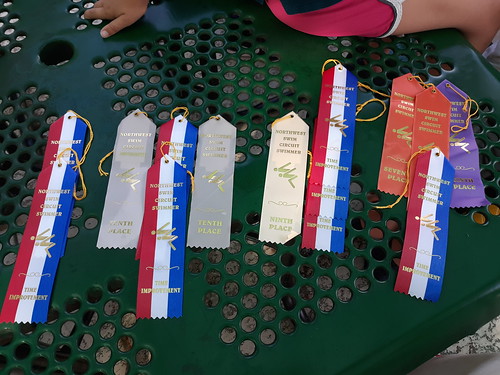 I love this post. I know I'm biased because I grew up swimming, but it really is such a wonderful sport --it runs the spectrum from chaos at swim meets to highly technical when refining your strokes in practice. I'm so glad your kids love it, and I really enjoy reading about how your entire family is becoming a swimming family!

I can totally relate to tearing up when watching your kids swim fly -- it's such a complex stroke and requires strength and coordination.

Let me know if you need a recommendation for a shampoo that will solve chlorine hair... :) :) we have had some good rat nest hairstyles going on over here! (swimmer problems!!)

Yay! Swimming is the best!! I love the combination of individual strength, training, and improvement, and team fun and cheering and camaraderie. My mom also always loved that all 3 of us could be doing the same sport with competitions all together at the same time :).

This post made me cry. It's always amazing to see your kids do great, but it's even more magical when you know how far they've come. I'm so happy for all of you.
(And "resolved an interpersonal conflict without swearing" is 100% an award that needs to happen. I need a goal to work towards.)

Cried like a (40+ year old woman who FEEELS) reading this post. We want our kids to be ok, to feel joy and perhaps even success (however they define it) at practically a cellular level. Thanks for keeping it all so very real. xoxo

P.S. If at some point you'd be willing to private chat with me about meds and kids, I would appreciate it. I do not have a ninja doctor, and am scared and sad and anxious to see my kids ok, let alone joyful and perhaps even successful.