It was quiet; too quiet.

The night before I dropped Ryan and all of the kids off at the airport was like the cherry on top of the week of no sleeping sundae. It started last weekend when I ran out of my back medication and they wouldn't refill my prescription until four days later. I thought "Well, this is as good a time as any to see if I can go without it!" and simply--stopped taking it. Cold turkey. My weird arthritis issues didn't come back but apparently you are not supposed to stop taking that particular drug abruptly lest you STOP SLEEPING FOREVERMORE.

The first night I was up and down and restless. The second night there was a MASSIVE thunderstorm that knocked out the power and made our smoke detector go off repeatedly at two o'clock in the morning. The other nights were more of the same: fall asleep reading a book, awaken forty-five minutes later seized with a weird fight or flight sensation, try literally everything, then conk out finally around three o'clock in the morning. This should have made me feel groggy and terrible all day but it was more like my body and brain had simply decided that it would not need to rest again ever and I felt weirdly clear headed.

Then Thursday night I had finally fallen asleep only to be visited by a little person somewhere in the predawn hours. Exhausted, I pulled this person in bed with me and tried to go back to sleep. After the third time this person woke me up by scraping her toenails down my back, I told her it was time to go back to her room. Only she refused and threatened to start screaming if I picked her up. With great flouncing, I grabbed my pillow and went to lie down in her bed. I had just gotten settled in when I noticed that I could hear someone snoring softly from somewhere else in the house. I flounced back to my room, told the interloper that it was time to be brave and go back to her own bed and fortunately this time it worked.

On Saturday I drove everyone to the airport and dropped them off at the curb and then got back into my car to try and figure out what to do with the six days of solitude I was facing down. Since I don't know how to cook for only one person the first place I went was Trader Joes to buy enough ready to eat microwave food as I could. I got there twenty minutes before it opened so I just sort of...sat... on a bench and waited. And it was FINE. This was the first signal that things were going to be very very different. By seven o'clock that night I had grocery shopped, cleaned the entire house (including the bathrooms which were UNBELIEVABLY bad, like OSHA violation bad), written a newsletter, waded into Mary's closet and returned triumphant with a cubic yard of things to donate and two full kitchen trash bags of garbage. I'd done all the relaxing I wanted to do and I didn't feel like opening my computer to work. And it was SEVEN o'clock. So I put on my swimsuit and drove to the pool to work out.

Friends, I have had a pass to the good lap-swim pool for six weeks and the closest I've gotten to working out is watching the kids' swim practice. It felt so good.

Then I went home and picked up my crochet project while I watched Four Weddings and a Funeral and drank wine.

Sunday I woke up and since no one was supervising me I was thirty minutes late to church. And when I got home from church my neighbors were all in my neighbor's pool so I went over there and hung around until it was time to get ready for a meeting at my house. Also on Sunday I basically had a beer and a donut for lunch. Sunday night I had an online meeting with my students that ended just in time for me to make it to the symphony's concert in the park downtown. While there I observed the children dancing on the light up dance floor in the middle of the park and had a strange moment of recognizing that children are actually pretty charming little creatures. Sunday was a lovely day.

Going to work Monday without a hard stop deadline was freaking magical and after that I dropped off all the donation stuff from Mary's closet (running errands AS THEY ARISE WHAT WITCHCRAFT IS THIS?) AND THEN WENT TO THE POOL TO WORKOUT AGAIN. I returned home, changed into comfortable clothes, made myself some stirfry (kit, from TJ's), and then read a BOOK FOR TWO HOURS.

Some things I have learned.

1) I am not a slob, I live with slobs
2) I am not suffering from dementia, I just have five other people who have claimed my brain for their own use
3) I am not undisciplined with regard to working out, I am TIRED.
4) My work day is much easier and more productive when I do not arrive from and return to UTTER CHAOS at home.
5) I require more interpersonal interaction than I get when living by myself.
6) I miss the little psychos something terrible, but I am not looking forward to returning to the role as the One Who Holds Back the Entropy. The house is SO CLEAN! I am not assaulted with a cloud of aerosolized urine every time I pass by a bathroom door!

I've been hearing such happy things from Ryan and my mom and can picture it all in my mind. I talked to the kids on the phone and heard all about the terrifying turbulence they flew through, the part when Mary started screaming so loud on the plane that everyone turned around in their seats, the way Charley swam all the way across the bay and back, and how the plane had VIDEO GAMES, MOM. VIDEO GAMES ON THE PLANE. I join them on Friday night and a really looking forward to it, though I am afraid the contrast between living alone and living in nine hundred square feet with seven other people, four of whom are kids all hopped up on vacation is going to be...startling. 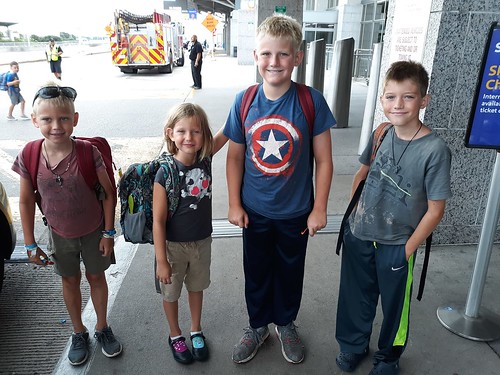 The "One Who Holds Back the Entropy"!!! I will have to remember that! :D

I bave always believed $4, but I have never been able to test my hypothesis.