We have a BUNCH of ground to cover, my friends. It has been a MONTH. Between the end of the semester and all that entails (and that entails a lot when you have three classes) and my advocacy work at church, which is at once incredibly satisfying and extremely frustrating, a source of joy and pride and also something that sometimes makes me want to pull up stakes and become an Episcopalian. Or a nun. I could live in Nonatus house, I think. Though the British politeness would obviously be a significant personal challenge. And then there was the rain and a meeting with my research partner to get our summer work off the ground (surprise, let's plan a quick workshop!). Trying to get one more paper ready to submit. All of the THINGS with the KIDS and the MEETINGS. And then a week of what felt like nonstop endless rain that made me want to curl up with something cozy and a glass of something. I said rain twice but I think that's appropriate because that's how much it rained.

One rainy day I attempted to work at home. This worked marginally well until my parents brought the kids home. 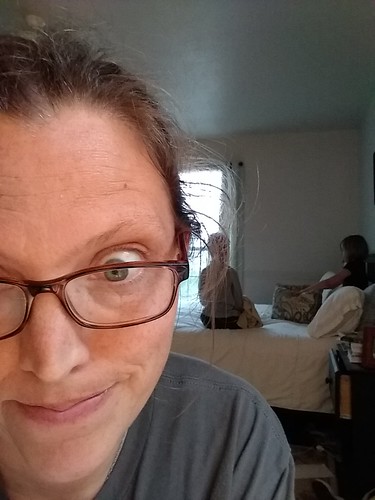 (I am having trouble remembering which time it rained for these anecdotes. Was it the time the hurricane hit when I was taking a kid to a medcheck? Or was it the time lightning struck so close to my house that the BOOM was instantaneous and the power went out? Or was it the giant storm that hit while I was trying to run into a meeting at church? Seriously a lot of rain)

On Saturday of last week the author who has had perhaps more influence on my life than any other suddenly died at the age of thirty seven, leaving behind a husband, two small children, and an enormous community of admirers. I learned of her death last Saturday morning. I'd just spent a pleasant two hours grading at a coffeeshop and then picked James and Mary up at their choir rehearsal. We were headed to get Charley from the Scout pancake breakfast and I was flipping through Twitter while at an exceptionally long red light and saw the news. It was like someone had punched me in the stomach.

Charley came bouncing out of the pancake breakfast with a warm smile and held up the extra cupcakes he had saved for us. There was only one chocolate one, which he insisted I take. While we drove to the grocery store I told them that someone I admired had died and that I was feeling really sad. They asked a lot of questions and when I told them that she was only thirty-seven Charley abruptly announced that it was time to change the subject. After the store I took the kids to Home Depot to buy plants for our front garden. I went inside to make lunch when we got home and when I came back out, Charley was showing the little kids how to dig a big hole, mix in some new potting soil, then carefully take the plant out of its pot, and put it in the ground. 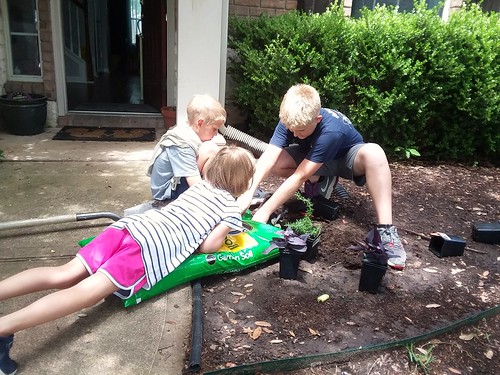 I powered through the rest of the day, having a fun pool picnic with the kids (a WEIRD pool picnic because I hadn't planned to have a pool picnic so I just packed up our regular dinner, which was a quinoa salad, sliced bratwurst, and strawberries), and getting their tired bodies in bed early before numbly crocheting on the couch until one o'clock in the morning. Not sleeping sort of became the routine for the rest of the weekend and into early the next week which probably explains the barely-functioning stupor I was in until Wednesday or so. My friend Rosa can sense these things and so invited me to babysit her adorable toddler during her doctor's appointment before taking me out for tacos and cupcakes and a walk and the opportunity to talk about "my friend Rachel" as though she was a real life friend whose kitchen I'd hung out in before rather than a New York Times bestselling author and hero to women, people of color, and the LGBTQ community. I think RHE would have approved of me seeking out a friend and sharing a meal and a walk and of saying "How the **** did this happen?!" as many times as it took. During our walk and conversation I had the oddest sensation that my brain was slowly coming back online. I am grateful.

In less deeply awful news, summer swim team started practicing and it is still amazing how happy it makes us all. 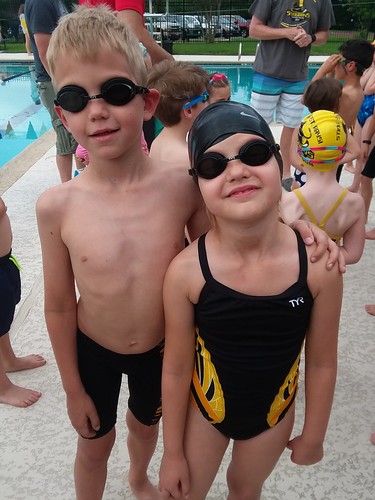 Wes considerately placed his thermos on the counter and said to me "Please bring my dinner to swim. I am always hungry afterward." All four kids are swimming this year which means we will be at practice for approximately seventy five years ever day and meets will never end, which is fine because I am the 9-10 boys tent mom AGAIN (unsurprisingly the under six girls tent mom job filled quickly*) and bizarrely I am looking forward to it all.

*by someone with a cheerful email signature quote befitting the six and under girls' tent mom whereas my more, shall we say, assertive, personality is decidedly more well-suited for the 9-10 boys, not that I necessarily relish that kind of challenge.

The air temperature at Friday's practice was 64 degrees and the unheated pool was freezing. The coach got Wes out of the water when he started shivering violently. 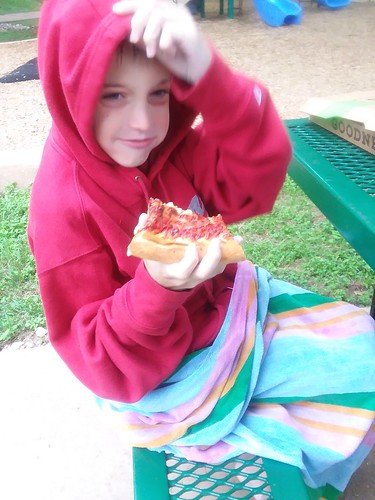 This Saturday was graduation (AND MORE RAIN) and then Ryan and I took six kids to brunch. 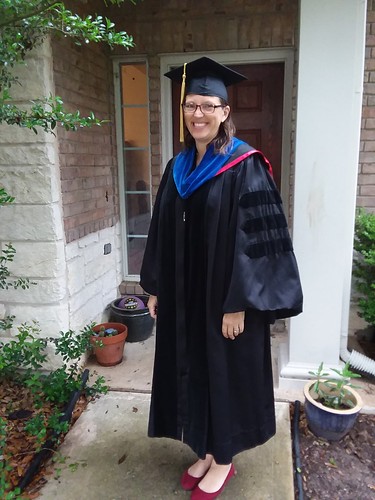 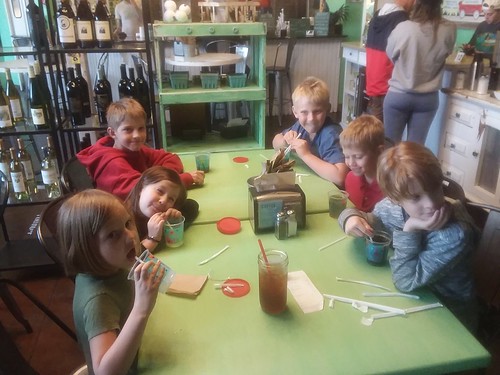 Later we took six kids to the pool and met up with some other friends for dinner there and ended up spending four hours at the pool even though it was still like sixty four degrees outside. The kids all put fuzzy pajamas on once we got home and did not believe me when I told them that a mid sixties day in the summer was not that unusual when I was a kid in upstate New York (and I STILL had to jump in for swim lessons). This morning Ryan and the kids made me eggs benedict and a mimosa. I led our affirming song and prayer service at church and found myself singing "River of Jordan" by Peter, Paul, and Mary for the entire group. We went to brunch again after church (because obviously) and ran into two wonderful mom friends who sat by us and let our kids sit mixed in with their kids and we all drank sangria and laughed and complained about church politics and it was really really lovely. (I just came back here to add a few more "reallys" because it was the actual best--the weather, the sangria, the happy funny kids, the friends) 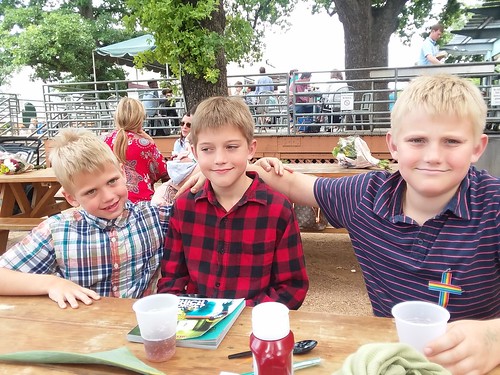 I made them touch each other because it is Mothers' Day. 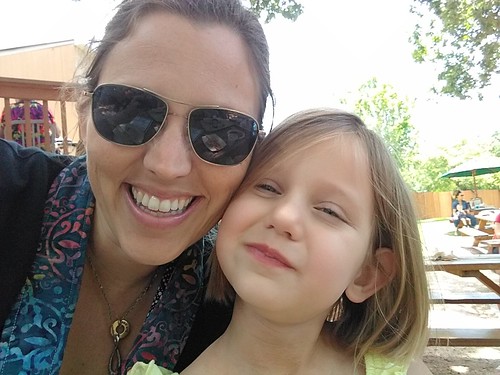 The girls' side of the table. 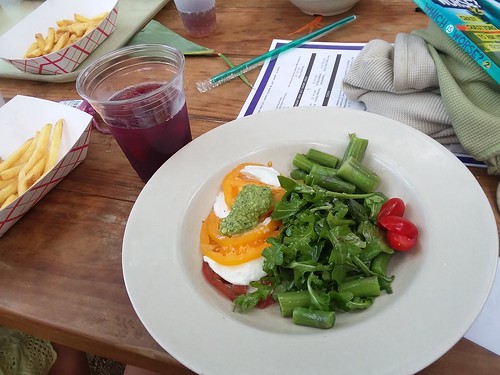 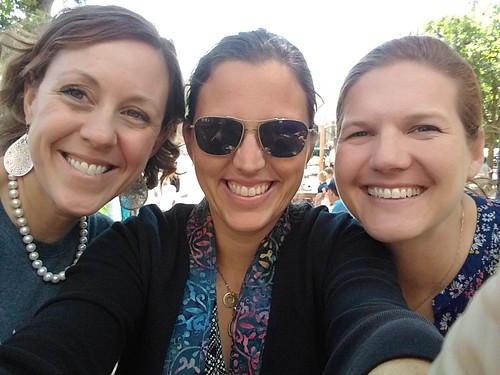 Summer research starts tomorrow afternoon and then I am off to the races for eight weeks. Hopefully you will hear from me before then!
Posted by Becca at 7:31 PM

So,so sorry to learn of the death of Rachel Held Evans at 37 for no good reason (and what IS a good reason at 37?), of whom I knew almost nothing until after she died. Everyone's child and children provide a bolster until the unimaginably unacceptable loss of a peer and teacher. Many sympathies; no number of delightful kid photos can compensate. Peace to you when time permits.

"I made them touch each other because it is Mothers' Day."
Best picture caption ever, from a fellow mom of kids with issues!

Oh, Rachel's death hit me so hard too. An absolute punch in the gut, and crying off and on randomly for days. She was such a force for good and right.

I love that he gave you the only chocolate one. I too spent a quite some time reeling over the impossible to understand death of RHE. My kids were compassionate despite my having never met her or introduced them to her, and that I suppose is an RHE lesson I can hold. You have always seemed an Eschat Chayil to me, and so I am not surprised that you felt her loss profoundly. XO