When we were not able to find a lifeguard for the family retreat this year I told the organizers that I'd be happy to take the lifeguarding class and get certified if it meant my kids could swim and thus not hassle me about not being able to swim at the retreat for two straight days like they did last year. This is how I found myself joining up with a class of twenty sixteen year olds at a nearby swim school the weekend before last. Something I learned about teenagers is that they view attempts to make small talk as an unforgivably aggressive act. It was like I'd sat down across from them at the table and greeted them with a hearty "Kiss my ass!" instead of "Hello, my name is Becca!" After that I played a little game with myself to see how many people I could make eye contact with. It was not easy. Also not easy was the class itself, or climbing out of the (seemingly bottomless) pool onto the pool deck. But I made it and I passed and I now I have a certificate and huge black bruises all up and down my legs and ankles.

After the lifeguard class and two days of hiking and backpacking, it was finally time to go relax at the family retreat, AKA the highlight of the non-Maine year.

Since we were already in the area it only took an hour to get there, which made it feel like we got an entire extra day. As soon as we pulled up to the lodge, the kids disappeared and I didn't really see them again until Sunday afternoon.  Mary was so exhausted after the campout that she tucked herself into her sleeping bag around 7:30 and slept right through the night.  A few friends came over to our porch (including the PhD club, which has been gathering at the retreat for three years now) to hang out after dark, I paid Charley a dollar a kid to round up his siblings, and then they all passed out.  Pretty great night.

Mary woke up fresh as a daisy the next morning after more than twelve hours of sleep.  I love this picture so much and wish that it was in front of some flowers or something instead of the men's room and a trash can. 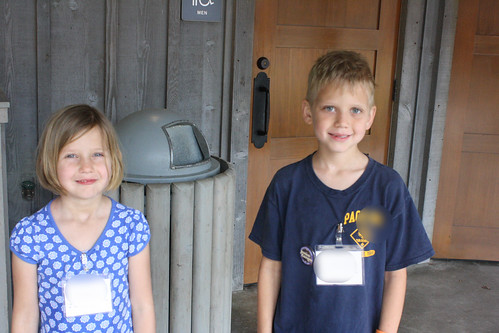 I had to wade into the freezing river to rescue Charley's stuck fishing hook.  This was BEFORE the waterfront was open, which means I had to break my own rules right out of the gate. 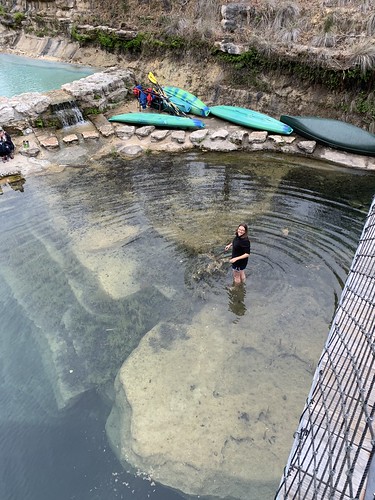 There are some organized activities Saturday morning, but I ended up spending a great hour talking to a friend, some other time holding people's babies, and then having lunch.  It was good to have this relaxing morning because after lunch it was SHOWTIME. 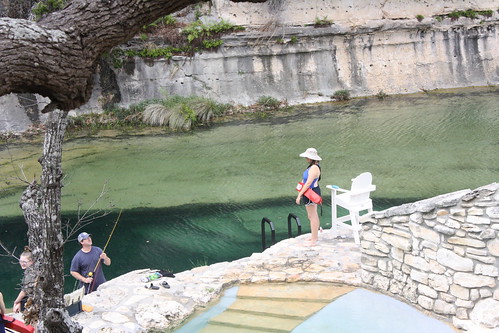 This was just as fishing was wrapping up before word was out that the waterfront was open.  In other words, this picture is not representative of the ABSOLUTE CHAOS that ensued once fifty kids and their parents realized that it was time to swim.  It was the longest two hours EVAR.  I only had to yell at a couple of kids, one for diving and one who kept doing the dead man's float right in front of the lifeguard stand.  There were kids on kayaks and kids in canoes.  Kids in lifejackets.  Kids swimming back and forth across the river (the river of unknown depth).  Adults jumping in and trying to swim to the bottom.  And don't forget about the slide and the baby pool.  Thankfully there were two of us. 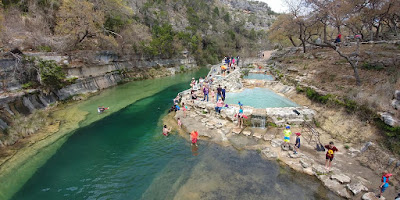 After I got a glass of water and a couple of Cadbury Eggs I joined Mary for some coloring time. 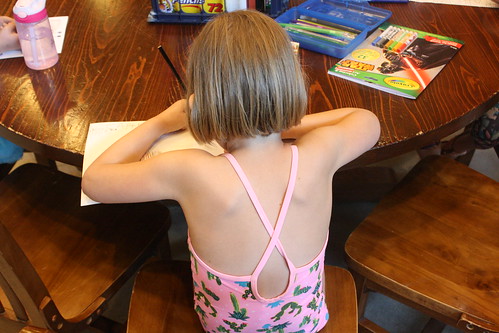 The kids and I hung out inside for the rest of the afternoon until it was time for a yummy dinner and then smores time.  Wes takes smores very seriously.  His marshmallows are perfectly roasted. 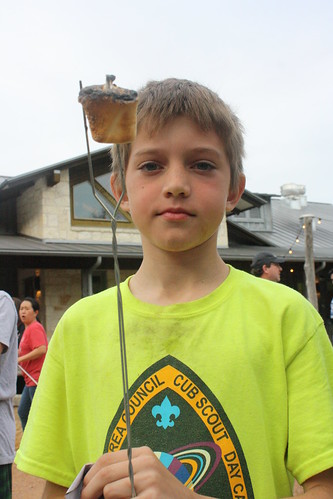 James likes his to catch on fire as quickly and completely as possible. 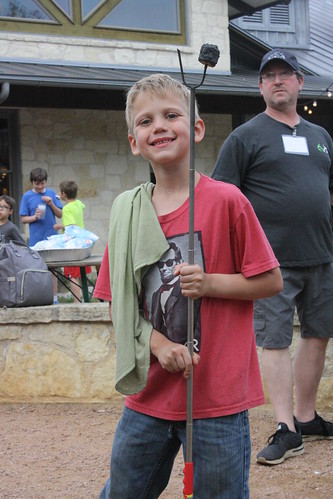 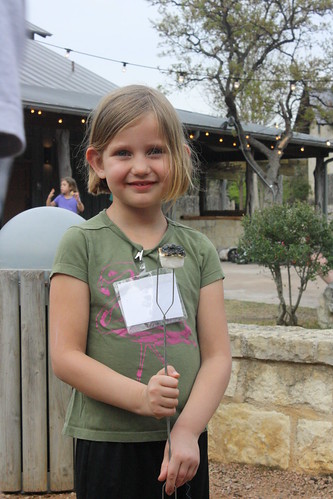 Our friend Rosa was ably handling passing out marshmallows and skewers to the teeming hoardes of children, so we manned her baby. 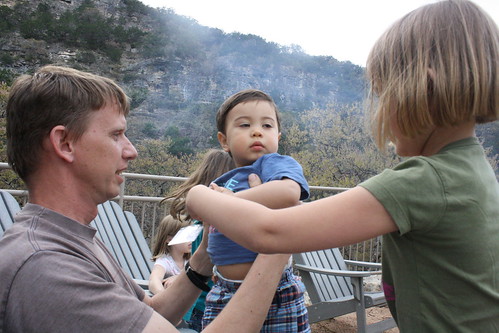 Note that Ryan is in the background of this nice picture of Rosa in #peakdadmode, holding a toddler and correcting someone's smore technique.  #livinghisbestlife #happyplace  Rosa's also in her happy place, keeping kids organized and preventing them from stabbing each other with hot skewers. 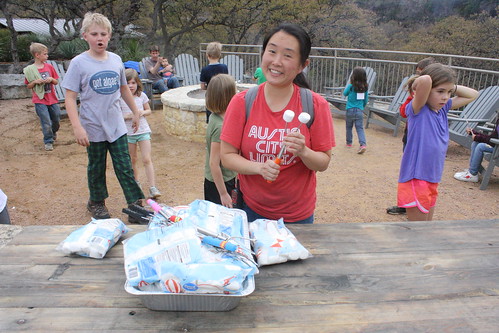 I looked over to see Charley eating cobbler by the fire looking so grown up it took my breath away.  Don't worry though, friends, later he jumped into the baby pool fully clothed to rescue a half dead fish, so he's still my baby boy! 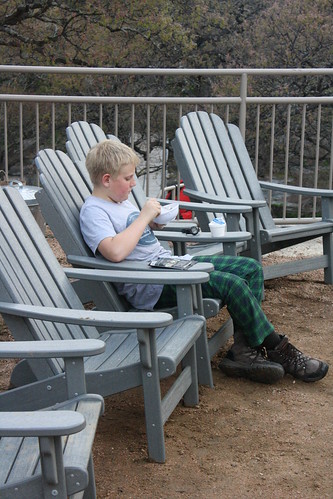 After smores the kids disappeared into the night and it was time for my favorite part, the sing-a-long.  I talked my way into helping lead the singing and what I lacked in vocal ability I made up for in enthusiasm.  The guitar player wondered aloud if we should cut a couple of verses of the Lord of the Dance and I said a little too emphatically "This song is the entire Gospel story!  Which part do you think we should cut?!" 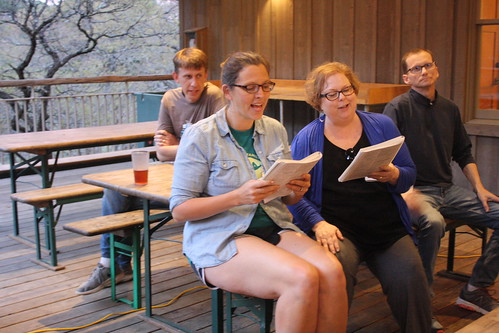 Our last song was "Let it Be."  PERFECTION.

After the sing-a-long some friends and I stayed up and talked church politics around the fire until I don't even know how late it was but it was LATE late.

And Sunday morning after breakfast and cleanup we have chapel.  It always cracks me up to see all the bikes and scooters gathered around the entrance to the chapel, the dining hall, the waterfront.  So many kids! 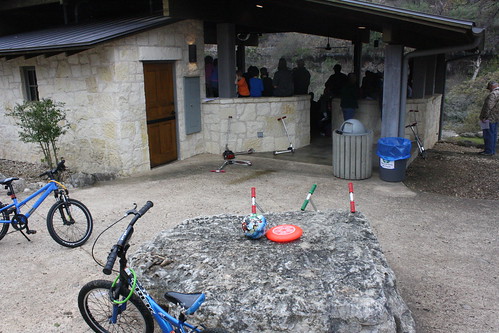 And then, sadly, it was time to leave for another year.  Re-entry into our normal lives has not been easy to say the least.  Alarm clocks are so rude.  I should always have access to many of my friends all day every day.  Meals should be eaten in community.  Children should be raised by the collective.  And I'd love a nightly sing-a-long.  Only another twelve short months to wait.
Posted by Becca at 7:52 PM