1. The other day a girl from down the street stopped by to ask Mary to play outside. Mary was exhausted (from a big day of watching YouTube videos of roller coasters and eating cinnamon rolls) and wanted to play inside, so she politely asked if the kid would like to play with her doll house. The other girl said she would rather play outside. They stared at each other for a moment at an impasse before I said "OK, I guess we'll play another time, Emma! Have a nice afternoon!" and said goodbye. Mary went back into the living room, got an apple, wrapped up in a blanket, and laid on a chair. Rest, comfy blanket, healthy snack, politely decline social engagement? Self care goals. Be like Mary.

2. I knew I was finally over my cold when I awakened and noticed the disgusting squalor in my bedroom for the first time. It only took twenty minutes to hang up and put away all the clothes, make the bed, perform a disgusting snot-encrusted easter egg hunt for wadded up kleenex among the sheets and blankets, put away the humidifier, make the bed, and take all the coffee mugs downstairs, but it is a much more enjoyable space now.

3. Charley, who fancies himself a Latin American Catholic, for reasons I don't completely understand, has insisted in years past that we keep the Christmas tree up until Epiphany (He was disappointed we couldn't buy hay to leave out for the Three Kings' camels). This year I took back the control and explained that unfortunately, Epiphany is too close to the beginning of the semester, which means that if we leave the tree up until Epiphany, it will be staying up until Carnival. And since they are in a semi-subdued mid-break stupor, no one objected when I disassembled the holiday magic and boxed it away until next year. Vacuuming up all those needles was the most satisfying thing I've done all week. The living room has gained approximately a hundred square feet and Ryan didn't even notice until I pointed it out to him the following morning.

4. Last week I thought we could save some money by sticking close to home, using only our wits, our siblings, and thousands upon thousands of empty calories to entertain ourselves. For two days the only place we went was one quick orthodontist visit down the street. All this got me was a garage full of "treasure" that the kids dragged home from trash cans around the neighborhood. One evening a girl I've not seen before rode up on her bike and handed me James's shoes. I asked "Why isn't James wearing his shoes?" and she told me that he took them off "when he was trying on the boots." Sure enough, James appeared moments later bearing a pair of man-sized hip waders, among other things. I also learned that James has been ranging the neighborhood like a feral cat. He told me, "If Sophie and Caroline aren't home, then I go see if James or the other James are home, and if they're not, I go to Alex and Avery's." This is more people than I know in this neighborhood and I thought I was socially aggressive. We don't call him The Mayor for nothing.

4b. It has not all been crazy neighborhood trash antics. The behavior has been...interesting...at points. On Saturday Ryan exclaimed with exasperation "I can't believe you've been dealing with this ALL WEEK!" Indeed.

5. Last night we went to surprisingly raucous NYE party with our church friends. The hostess passed around champagne for the adults and sparkling cider for the kids for our eight o'clock countdown and toast. There were a good twenty kids there and it was REAL funny when they were all running around with solo novelty shot glasses full of sparkling cider. We also gave them sparklers. No one lost an eyebrow! After the countdown the kids were all aloud to blow their noisemakers and it got so loud that the babies started crying. 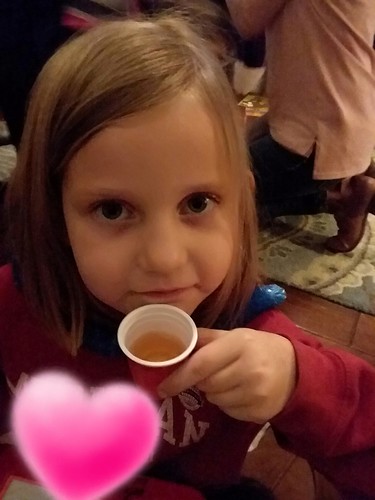 6. When we got home from that party, we stopped by at a neighborhood party across the street. Only there was a bit of a mixup when half the family left while I was still dealing with a toe injury James had sustained at the first party. I thought Ryan was already there, so we all went across the street. Ryan wasn't there and when he still hadn't shown up after half an hour, I told the kids it was probably time to go anyway, since it was almost ten. I got sidetracked by something and then Ryan actually did show up (the party was in the back of the house and he couldn't see anyone through the windows, so he was doing a stakeout on our front porch, waiting to see signs of life), so we ended up staying for a bit longer. We were just about to leave when Charley showed up wearing his pajamas and his coat. Apparently he had gone home, gotten himself ready for bed, and almost fallen asleep before wondering if we were all actually coming home. If you're confused you feel the same way I did. I counted the children before I went to bed. Somehow we all made it to the same place.

7. A month ago I posted some humblebrag FB post about how in the next four weeks I had to make two research posters, administer forty exams, grade forty exams, grade twenty final papers, post sixty grades, design three syllabi, and make holiday magic happen for all the children all with a minimum of childcare thanks to the holiday break. I got all my grades in on time, early even, and indeed managed to make the holiday modestly magical (big thanks to Ryan), and today I sent the second poster off to the printer (at the eleventh hour). I plan to work on my syllabi on the plane and can squeeze in paper edits around the edges somehow. I can't believe it's all working out. Sunday I leave for a conference in Phoenix and I come back Wednesday and STILL have a few days before my classes start. In other words, I'M GOING TO MAKE IT. That was...intense. December always is. But at least that damn tree is put away.
Posted by Becca at 12:53 PM

You put the tree away before Independence Day?!!!? I'm in awe of you. Teach me your secrets!