I don't know if it's the age or it's just James, but he has reached peak Soup Can* level adorableness recently and has also become witty and sarcastic and a little mischievous and inappropriate, in SO MANY ways that I just figured he deserved his own post.

*My grandfather used to comment that Baby Charley was so cute his face should be featured on a can of soup.

1. Last night after tucking James in, I noticed something important had disappeared from the shelf by the stairs where I had put it, intending to take it downstairs after everyone was in bed. I went into his room where he was lying peacefully under the covers with his light on (this is how he sleeps ever since he watched the Gamemaster video at a friend's house, headdesk). "James?" I began. He smiled angelically. "Do you know where the box by the stairs went?" "Box?" he replied sweetly. "Yes, the box. The box full of cookies and candy and cash and your VTech watch and gum?" "Haven't seen it!" he replied, smirking. I walked closer to the bed and leaned over to kiss him goodnight one more time. The box was UNDER HIS PILLOW. "I needed my chapstick." he explained.

2. We were listening to the audiobook "Pippi Longstocking" in the car on Saturday. In the first chapter, the author describes how Pippi's mother died young and her father was swept overboard from a ship. She now lives in a big house all by herself with no mother and no father. The author goes into all the things she has to do for herself. James piped up incredulously from the back seat, "What about INSURANCE?!"

3. On the way home from rollerskating the other day it was pouring rain and I drove through a puddle that made the car veer slightly to one side. James, from the back, "WHAT THE CRAP WAS THAT?!" I replied calmly "It was a puddle, James, and you shouldn't talk that way." He responded quickly "HOW DID A FRIGGING PUDDLE MAKE THE CAR DO THAT?!" OMG.

4. James set up a tent in our upstairs family room. It took all day, which was perfect because the weather was miserable early last week. He later convinced Charley to sleep with him in the tent for the night. The next morning, James was SO EXCITED about how well he slept. Charley was less excited. 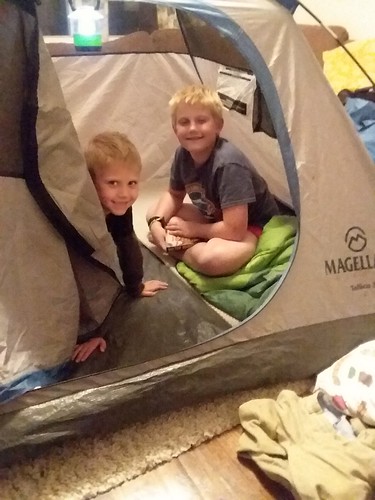 The next day he took apart our entire sectional couch and reassembled the cushions into a conversation pit inside the tent. When Ryan and I finally couldn't take it anymore, after four days of the tent, we took out: All the couch cushions, every piece of bedding that was not nailed down upstairs, numerous plates, half a case of empty Topo Chico bottles, and like thirty five pizza crusts.

5. This is how he sat on the couch with his buddy Cash to watch Star Wars the other day. 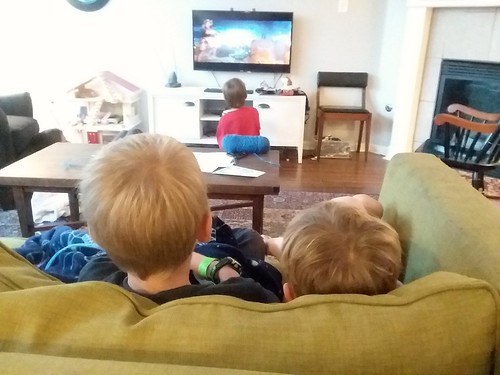 The rest of the couch was empty.
Posted by Becca at 11:28 AM

OMG James is adorable...almost as adorable as Mary! ;)