So we needed that.

On the spectrum that ranges from people who like holiday breaks because everything is shiny and festive and there are cookies everywhere on the left to people who like holiday breaks because every school day feels like the last thirty minutes of "Saving Private Ryan" on the right, sixth grade parents must be only slightly less close to the right hand side than sixth grade teachers and administrators.

I assume this is why it only took thirty seconds for my friend V to arrange for a sitter for our combined seven children when I texted her the other afternoon and asked if she would like to go to Beer n' Carols at a brewery near my house.

Like literally, thirty seconds after she said "I could try to find a sitter for all the kids," she texted back to say "My sitter is free! Your house or mine?"

Last night was the night. I arranged cookie decorating, coloring, and game stations in my house in hopes that if the babysitter (Whom I had never met) could divide the kids into smaller groups, it wouldn't be so overwhelming. And then Ryan arrived with the pizza, V and her family picked the swimmer kids up from practice and met me at our house, we handed off some hasty instructions and the Netflix password, and then screeched out of the driveway like the place was on fire (AFTER we made James and his buddy Cash, who we discovered eating pizza in the dark in the front yard, to go back inside and STAY inside, because, as I told him in a screechy tone, "Kelly is not here to chase you all over the neighborhood in the dark!").

We met up with some other friends when we got there. J brought her daughter, who is Charley's age, who sat looking bored the whole time but did not destroy anything or get lost in the woods like my kids would have done. Raising a girl must be so different.

We raised a toast to sixth grade. There was some profanity. 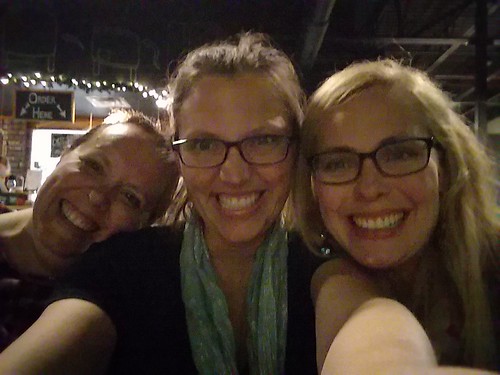 Ryan was there too! And there were no kids! 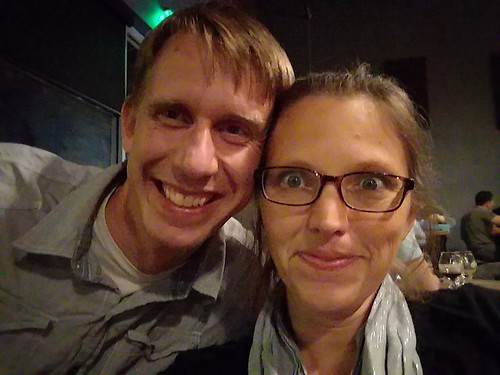 There was beer, a cozy seating area, and a band of gingham-wearing hipsters playing banjos and mandolins and stand up basses.

I could tell that we all, um, needed this.

This was especially evident when the band finished up at the end of the night and no one moved.

The four of us arrived back at my house to find seven happy kids in their jammies watching TV. The sitter reported that every few minutes James and Cash exclaimed "This is the BEST NIGHT EVER! Let's HUG!" Charley put himself to bed with a book. They ate all the cookies and an entire batch of frosting. I don't really know what went on here, but the place was still standing, so we will probably hire her again. We plunked them all in bed and watched National Lampoons Christmas Vacation. It was perfect.
Posted by Becca at 6:52 AM

Haha, I agree that raising girls is SO different. I have one 8-year-old daughter and my sister-in-law has five (!) sons ranging in ages from 5 to 18. The cousins often hang out together, and let's just say it makes me grateful that mine is a girl. ;-) I think it probably also has to do with number of children though...as you probably know, it's exponentially easier to handle one child than multiple children!