It's a pierogie par-tay

When we last spoke, Ryan and I were up until one o'clock in the morning making pierogies, supervising a 6th grade project on Greece, and coaxing (forcing) unwilling children to engage in basic levels of personal hygiene. That DAY turned into a WEEK. Wednesday I had my choir concert, which was one of the highlights of the semester for me, except for the fact that on the way there, I had to pick the kids up at school, and was met in the school lobby by the assistant principal, who is awesome, but who gave me his cell phone number because things were THAT BAD. This was DISTRACTING.

Thursday night I was singing with the choir at our campus's candlelight Advent service, which was also SO COOL and something that is deserving of its own post because choir, has been great. I was in BAND. And not just band, but DRUMLINE, and choir is not something I ever considered for myself, but I needed SOMETHING FUN this semester and the director opened choir up to faculty and I just sort of signed up on a whim. A whim I am grateful for. But even though I was supposed to sing in two services, and even though I would have loved to sing in two services, I bowed out of the second one and went home where I put on my pajamas and turned on Father Brown with great intentionality because REST, it is a thing.

Friday we had four inches of rain and a cold front which dropped the temperature into the mid-thirties and Charley left after dark with a bunch of unfamiliar people for a Scout backpacking trip. You guys know I have NO CHILL about flash flooding. Too many awful stories around here and too much professional background in heavy precipitation. I was a MESS when he left. And then just sort of figured no news was good news all weekend. It was really wonderful to see his smiling face on Sunday at pickup.

But back to the original point of this post, which was the party we held on Saturday night called "Friend-gilia" based loosely on the Polish celebration of Christmas Eve that my aunt holds for us each year. My aunt was born in Poland and moved to the US as a teenager. She and her mother used to make us Pierogies and borcht and fish every Christmas Eve, starting when I was in high school. It was all so unfamiliar at first, but soon became a beloved part of our holiday. I took baby Charley to Wigilia, and then toddler Charley and baby Wes, carefully tying a dishtowel around fat little necks to keep their Christmas shirts free from borsct stains. James attended his first Wigilia at four days old and I ate my pierogies and sour cream one-handed over his head as he slept curled into my neck. The kids look forward to it each year. A couple of years ago Ryan learned to make pierogies and we hosted Wigilia for our family and my aunt and uncle. And this year, we wanted to host it for our friends. Which is why we had to make a hundred and fifty pierogies.

I took exactly ONE picture of the party, which is a bit of a bummer because I love going back through pictures, but I was having too much fun. The meal is meatless, and I was concerned about people being too hungry, so I made WAY TOO MUCH food: roasted veggies, roasted brussells sprouts, winter fruit salad with pomegranate seeds apples and pecans, chopped radishes and cucumbers and a yummy red dip, tilapia with parmesan and tomatoes, a double batch of potato leek soup, and a cheese plate. My friend Heather brought her amazing kugel, my friend Irina brought an incredible borcht. In the last minutes, I threw together a pot of Pioneer Woman mac and cheese for the kids. And then of course were the pierogies, which were the star of the show. I set Ryan up at his frying station on the island with an electric skillet, three sticks of butter, and a 3 quart Corningware full of diced onions. He fried pierogies for THREE HOURS, chatting and laughing with our friends. It paid off--my aunt, the pierogie expert, complimented his technique enthusiastically.

Dessert was a supermarket-sweep style raid of the Costco bakery area--cheese cake, a large cookie platter, a chocolate mousse cake, and tray of peppermint bark. This did not disappoint.

I should also note that the morning of the party we awakened reasonably certain that Ryan was suffering from the FLU, so I bundled the kids off to pick up all the groceries (at Curbside, thank god, though the woman who brought me my groceries seemed alarmed by the amount of alcohol and sour cream I required), then to Costco for dessert, as I SOSed my parents and asked them if they could come just a bit early and maybe help me put things together. They did ten times better than that, showing up at noon with an armload of pizza. My mom went to work in the kitchen, peeling and chopping a three foot tall pile of vegetables on my counter while I made soup and mac and cheese and we both fussed at and laughed with the kids.

Also the house was in shambles due to the chaos of the week, so I dealt with that. It was...alarming.

Ryan arrived back from urgent care with a diagnosis of a (non-contagious!!) sinus infection during this time and was ready to jump in, scrubbing the bathroom walls and hanging garland over the arch between our foyer and living room.

I was exhausted by the time friends started to come, but soon the adrenaline and wine took over and I settled into a comfortable flurry of activity (and twenty unsupervised children is a FLURRY). In the middle of the party a student from my school arrived to play the piano for the sing-a-long portion of the evening. My absolute favorite part of the party was so many loved ones crowded into our dining room, singing together with the candles and wine. The kids, who were all milling around upstairs, jumped in when we sang familiar songs like Jingle Bells. More friends arrived. A neighbor walked in to collect her daughter, James's friend, totally unaware of the chaos going on inside my house. I handed her a glass of wine and a song book and she had some dessert with us. James wandered into the dining room to sing clutching a pierogie in one fist and a Topo Chico in the other.

(I'm still finding Topo Chico bottles in my house. It's like a millenial Easter egg hunt. Indoors and out. Ryan found a bottle opener in our front yard a week after the party because we are classy AF)

Because everyone has middle-aged kids lots of people said their goodbyes by eight thirty and by nine there were just three families lingering in my kitchen. James came in and insisted we take a family-friend picture before it was time to go, and we were all happy to do it. 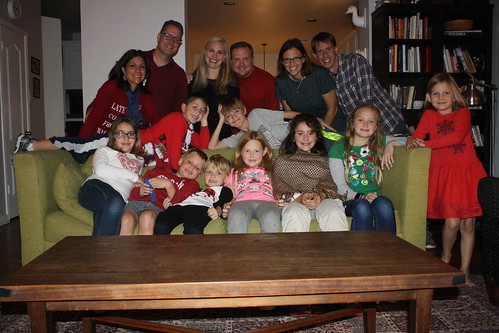 We scrambled everyone into bed and spent a pleasant hour boxing up leftovers, scrubbing serving dishes, and getting things back together. The next morning I laid in bed staring at the picture and reliving every moment and wishing I could somehow fit twice as many people into my house (can't exactly rely on the outside being hospitable in December, even here). I can't wait to do it ALL again. Because clearly I've forgotten what it's like to make a gross of pierogies. Brains are funny like that. Enjoy this charming picture of the kids at the Christmas lights last night. 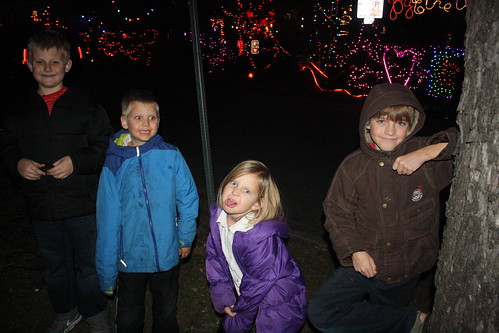 Sheesh, when do you have time to sleep?!?!