It was a DAY

I've heard more people use this expression lately and I noted to myself that I kind of liked it and then, well, yesterday, it was a DAY.

It was a DAY that started at 3:00 AM with a kid SCREAMING on the toilet because it hurt to pee. What I thought was run of the mill skin irritation did not improve with my halfhearted, middle of the night Aquaphor application, and we were awakened by this hysterical screaming approximately every forty five minutes for the rest of the night. Finally we put this child in bed with us, both because of proximity to the bathroom and because of a door that closed so that the kid didn't continue to wake up all the other kids. OMG. It was a long night.

In the morning it was clear that this child could not possibly go to school in this state, so we kept them home, which meant that Ryan and I had to blearily get everyone else ready. I dropped them off at school and went to teach a statics class on finding moments of inertia by integration, which went surprisingly well given the circumstances.

I then picked up another kid at school for a med check and drove to the doctor's office where Ryan was going to meet me with the sick kid (who by this point had been diagnosed by the on call pediatrician with a UTI). Ryan texted to say that there was no way this kid could sit through a med check what with the extremely urgent peeing every thirty minutes. So we did the appointment and then met him and the UTI kid at home.

Ryan took the med check kid back to school while I sat on the couch with the UTI kid and alternately worked, ran the kid to the bathroom (the screaming!!), arranged towels on the couch, and washed a load of undies.

Sometime that afternoon we drove to the pool to hand off Charley's swim equipment to the sitter, who had picked everyone up at school (And thank goodness, because there was no way the UTI kid could have made it through the carline).

And then we all drove home where I attempted to work on a paper holed up in my bedroom and sometimes had to run downstairs to talk someone through a screamy bathroom session.

Sometime around 5:30 I emerged from the haze to realize that we did not have any food for dinner. This was problematic.

I begged the sitter for an extra thirty minutes than usual, ordered a pizza, drove to CVS to buy PullUps (because DAMN), picked up the pizza, and went home. Ryan got Charley at swimming and met us at home, then left for his guys' night at the bowling alley. After pizza I forced everyone to take a shower. This sounds normal, except one other kid, who refuses to wear socks, gets these gross blisters on his feet. The shower was not negotiable at this point for a lot of reasons, but he was freaked out about the water hurting his blisters and LOST HIS DAMN MIND when it was time to get in.

So this is how I found myself standing in my master bathroom holding a child under the shower and washing his hair as he screamed at the top of his lungs "YOU ARE KILLING ME! I'M GOING TO DIE! I'M DYING! YOU'RE KILLING ME! WE'RE ALL GONNA DIE!" with plenty of extraneous blood curdling screams thrown in for good measure while a second child sat on the potty ALSO SCREAMING because it hurt to pee.

I was JUST WAITING for the SWAT team to show up.

Finally, the shower kid was satisfactorily clean (this took a grueling eight minutes) and I wrapped him in a towel, carried him to his room, dressed him in pajamas, and tucked him into bed. I instructed him to use some of his CBT calming techniques and take some deep breaths while I returned to the bathroom to make sure the other kid took a shower.

And THEN it was time for homework, where another kid who shall remain nameless but whom is having a bit of a TIME learning the ropes of time management required in middle school, announced casually that this large project was due on Thursday and that he hadn't exactly started working on it yet, AND that he chose not to work in a group so he was going to have to do the work of four students in the next two days.

And let's just say that this kids' research skills are in the developmental stage. I sketched out the headings he needed to research on eight pages of paper, handed him the Chromebook and told him to GET STEPPING. After much sighing and moaning and flouncing around and threatening and cajoling, I finally started having him read things out loud, summarizing them verbally, and then writing down the notes MY DAMN SELF just so we could build some forward momentum.

I was also supervising another kid's reading and handwriting specialist homework at the same time and submitting to an interview from a third kid about "my favorite idioms" so he could draw cartoons about them in his homework journal.

Also the UTI kid was there wearing a PullUp, which made my life about six million times easier.

I put the younger kids to bed as they got sleepy and at nine thirty I finally had to cut Mr. I Have To Understand The Entire History of Greece in Two Days off so he could get some sleep.

And then it was time to start making pierogies.

When Ryan got home at nine-forty-five and asked how many I had made, I calmly responded "One."

He opened a beer and rolled up his sleeves and by midnight we had banged out a hundred and five pierogies that are now carefully nestled in parchment paper in three of my baking pans in the fridge.

I went to bed at one AM still kind of wired. Only the knowledge that my choir concert was today kept me from taking a crack at our Christmas cards too. 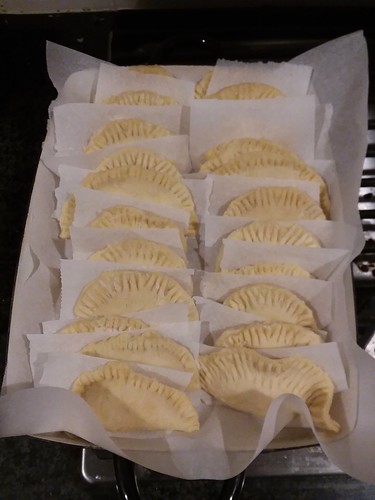 I thought yesterday was a day at my house because one dog pooped in the living room, one dog had diarrhea in her crate, and one kid wet the bed, but really that was mostly a matter of laundry and carpet cleaning so... You get an extra pierogi and a beer. Hope the UTI is feeling better ASAP!

I <3 you and you are a WAY better mom than I could ever aspire to be. My God. That was A DAY.

Haha...wow...that was certainly a DAY. You're amazing for handling it all with (some slight measure of) aplomb.

No doubt at all that was A DAY. and a half. and three quarters. From time immemorial, one of the flaws in kid design is that they have to be washed periodically. Sympathies; you deserve better than A DAY like this one.

I hope your next post will be titled "It was a WEEK." :-P