I think the best part of this weekend is that the entire family was in the same zipcode the whole time.  Sure we still had a parallel itinerary for much of Saturday, but at least we all woke up in the same house.  The previous few weekends were a blur.  I think they involved a few campouts and a trip to Minnesota.

As I mentioned, Friday was Charley's birthday, and in a refreshing turn of events, he requested something normal to eat for his birthday dinner.  Last year was an impossible collection of obscure vegetarian delicacies that I managed to put together with some grumbling, and this time around it was cheese quesadillas made with the really awesome shredded Mexican cheese from the grocery store.  PRAISE BE!

I was so excited by this that I went ALL IN on his cake, which he wanted to look like a fish. 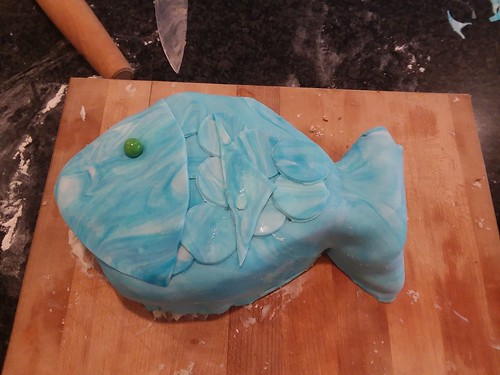 There were a LOT of candles on that fish. 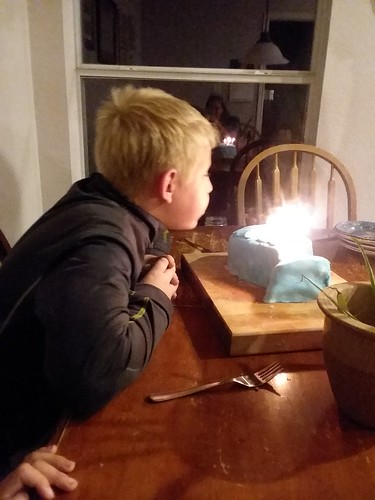 The kids watched a movie while we made dinner because dinner was a little late as I was busy having happy hour in the front yard with my neighbor.

Saturday morning we all slept late and then parted ways until the afternoon. Charley and I went to a swim meet while Ryan and the others went to a Scout workday at a nearby church. It was a two-hour long (rather than eight) unicorn of a meet with three evenly spaced events for Charley, clear skies, and highs in the mid-seventies. He even told me at the end "I'm so glad you forced me to stay and swim. That felt really good." Success all around. We headed straight to Taco Deli because it was conveniently on the way home.

Editorial Note: I am writing this while watching over Charley's shoulder as he attempts to complete six weeks of research on musical instruments around the world in a single evening. Yes I'm also having some wine, obviously.

Saturday night we went to a friend's fiftieth birthday party where the kids behaved so well for so long that we lost all track of time and kept everyone up for way, WAY past what would have been a respectable bedtime even with the time change. James and Wes didn't even eat dinner until 10:30 when it finally occurred to me that I hadn't seen them in quite some time. Mary had to be dragged, delirious, from the trampoline and carried to the car. The boys raided the kitchen on the way out and we left with enough taco makings for their lunch the following day, but somehow without James's shoes. Charley slept until ten o'clock Sunday morning before getting up for a piece of birthday cake. We were probably the only people to actually be late to church after the fall DST transition.

Sunday afternoon was lazy. Ryan made a pie with pecans the kids harvested from church. I made this white bean and mushroom gratin that took a satisfying two hours of puttering around in the kitchen. 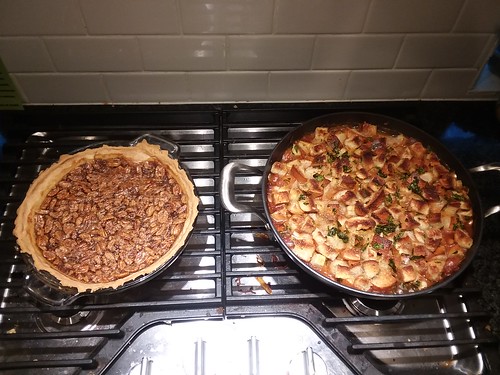 The kids had to make videos of themselves playing Halloween music in their costumes for their piano teacher. 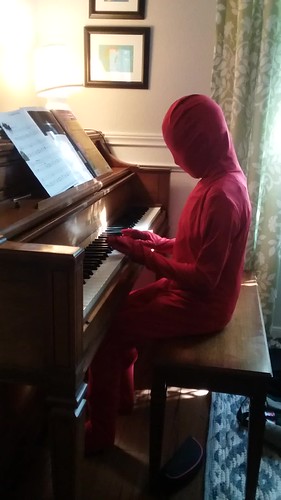 (Which is hard when you can't see) 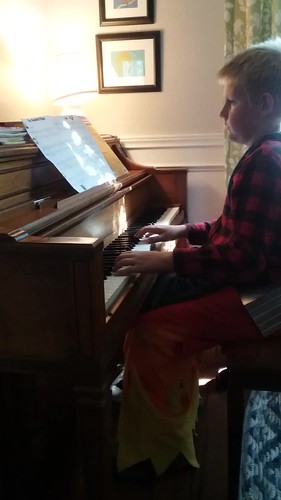 Editorial Note 2: He is still working on India an HOUR LATER. Still have Greece, Egypt, and Brazil to go. SHOULD BE NO PROBLEM.

It was a truly bizarre and wonderful feeling to go back to work on Monday feeling refreshed instead of as if I had been shot out of a cannon. WHICH IS NOT HOW TOMORROW IS GOING TO FEEL OMG MUSIC AROUND THE WORLD PROJECT.
Posted by Becca at 6:02 PM

That is a fantastically beautiful fish cake. It deserves more description and more bragging.

OMG...going to work and actually feeling refreshed is like a pipe dream for me. TELL ME YOUR SECRET.