That time I went to the South Pole

I'm sure one day I will look back and remember fondly the day Mary got a case of the sillies so severe that she fell down the stairs. And that later that same evening James tried to read a whole Curious George story in an over the top Gone With the Wind accent and they both started laughing so hard that James required two teaspoons of benadryl and four puffs of albuterol to get his breathing under control.

(Side note: "albuterol" auto-corrects to "butterball". James would probably love it if he could literally inhale turkey)

In other news, while at the Antarctic Ice workshop I attended in New Hampshire this summer, we filled out postcards that one of the scientists then took on an expedition to Antarctica and dropped in the mail. It was so cool to get the post card in the mail today. The kids were GOBSMACKED.

James noticed immediately how COLD the paper was (because it had been outside in the 40 degree mailbox). And Wes breathlessly asked me several questions about penguins before I stopped him and tried to explain. NO, he said, DO PENGUINS REALLY WALK UPRIGHT OR ARE THEY MORE LEANED OVER? James asked me earnestly if I got to see where Santa lives. I responded, you're thinking of the North Pole, this is from the South Pole, and he said OHH. You went to the South Pole. 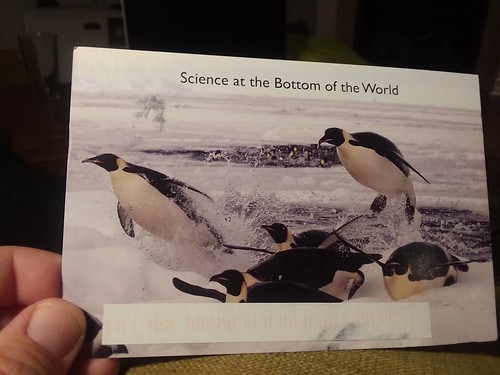 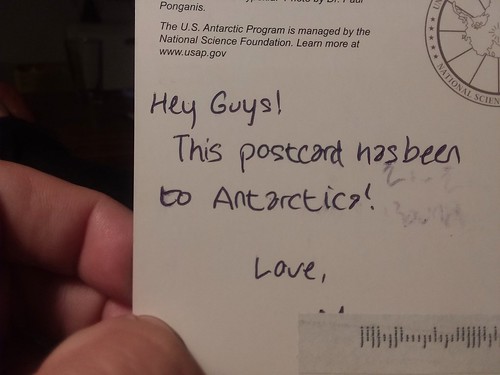 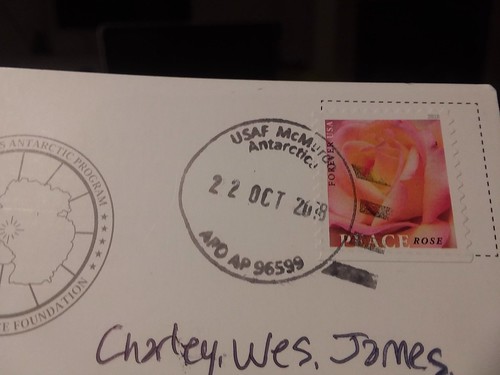 Mary fell down the stairs? Oh no, I hope there was no ER visit involved...

You didn't go, your postacrd went there. But one day maybe you will go, and maybe independently Charley will go!

I ran out of energy very early re enthusing my kids to do science. So glad to see you're succeeding!!!