I was worried when James bounced out of the car after our hiking trip on Wednesday afternoon that he was actually not hurt when he botched the landing on an attempt to jump from one boulder to another, badly twisting his ankle as he landed, and we might not make our goal of a major orthopedic injury every six months. Between Charley's broken thumb (Advent 2016, Unto us a Son is Given!), Charley's broken ankle (Easter, 2017, Christ the Lord is Risen Today!), and big daddy of them all, Wes's wedding anniversary arm snappage of 2018 (not a liturgical holiday, but a special day nonetheless), we have been on track for two major injuries a year for quite some time.

He was pronounced fine by my podiatrist friend over a taco lunch trailside the Friday after Thanksgiving and proceeded to spend the afternoon acting extremely fine. he scrambled over rocks and hills on our post-Thanksgiving hike Friday, jumping in the water and swimming across to the other side, running around apartment blocks, all the while only complaining a little when his foot would randomly twist as he walked across an uneven surface or if he was required to put his heel down.

I had started to forget all about it when he told me in passing on Tuesday that he has been sitting out at recess because it hurts to run, and that he wants to get out of PE too but he's terrified of Coach V, so he just deals with it.

After a second day of sitting out at recess and complaining because his friend William runs so fast and he wishes he could keep up I called and scheduled an appointment with a podiatrist. This was now a week after he hurt himself, which is the third kid equivalent of rushing him straight to the emergency room.

The doctor moved his foot around and up and down and back and forth. James complained of pain in a few key locations. The doctor made eye contact with me and said softly "I'm trying to get him to wince."

"I once saw him fly sideways off an exercise bike, head first into a wall, then get up and walk away like nothing had happened."

"OK, well let's get him some xrays then."

When James came back in he said "They made me put my heel down and I almost cried."

In the end he was pronounced to have a bad sprain and told that he has to wear a boot for four weeks. 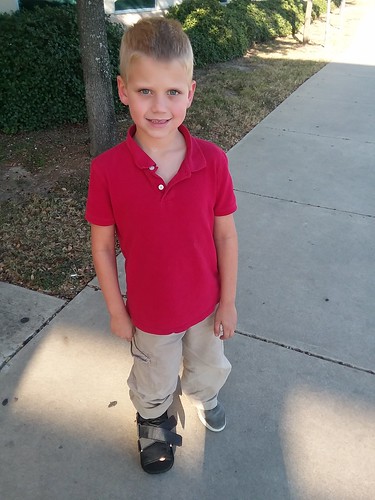 This was very exciting news, as you might imagine, until I told him that he would need to play only with kids on our street since he would need to get himself there and back and he couldn't hobble over on the trail. I then dropped him at a friend's driveway as we passed their house and left him to his own devices. When I went to call him in for dinner I found him sitting on top of a six foot tall stone fence post. Headdesk.
Posted by Becca at 7:47 PM

"This was now a week after he hurt himself, which is the third kid equivalent of rushing him straight to the emergency room." HAHAHAHAHA-- I love that sentence! Hope he feels better fast, and OMG he looks so grown up in that last pic!

Hahaha, I love the fact that a giant percentage of your blog posts (that I've read, anyway) have to do with injuries of some sort! Coming from a large family (which also has a lot of boys), I soooo empathize with this.