I finally got my act together and called to schedule the kids' flu shots a couple of weeks ago and all they had available were some spots at a flu shot clinic in mid-November. I had them pencil us in, wrote it on the Google calendar, and then promptly forgot all about it until Tuesday night at dinner when Wes said something about a friend getting a flu shot and then I exclaimed "OH! THAT'S TODAY!" I quickly checked the clock and we still had a comfortable twenty minutes to get in the car and make it in plenty of time.

The kids were DUMBSTRUCK and ate the rest of their dinner in hostile silence. Having had two kids go through cognitive behavioral therapy for anxiety, this is NOT HOW WE USUALLY HANDLE SCARY THINGS.

On the way there Charley riled everyone up by talking incessantly about how "this one time, my friend left school to get a flu shot and when he came back there was BLOOD RUNNING ALL THE WAY DOWN HIS ARM!"

James laughed maniacally and Wes screamed "STOP IT RIGHT NOW CHARLEY!" and trying to hit James from the third row.

The bickering reached a crescendo right as we got stuck in some traffic and Ryan barked at everyone to STOP TALKING NOW ALL OF YOU I MEAN IT!

Someone asked snottily what's so bad about getting the flu and I responded tersely as I tried to merge in front of an eighteen wheeler in the dark, "IT'S LIKE THE WORST COLD YOU'VE EVER HAD EXCEPT YOU ALSO HAVE A FEVER AND YOUR BODY HURTS SO MUCH YOU CAN'T MOVE."

Apparently, their memory of two years ago when THREE OF THEM PLUS RYAN got the flu includes lots of time off, watching TV and getting fussed over, and not feeling like death.

When we arrived they all slinked into the healthy kid waiting room and collapsed onto the tiny Ikea chairs. James separated himself from the pack, choosing a love seat on the end of the room. He just sat there with his coat on, staring into the middle distance, looking green.

They called us back quickly and all six of us crammed into this tiny exam room. "Who is going first?" the nurse asked, and Charley the tweenager climbed his tall body up onto the table. She unceremoniously swabbed his shoulder with alcohol and jabbed the shot in. He didn't even react. When she said "Next!" he looked at her incredulously and said "That's IT?! I didn't even feel that!"

After that show, Wes was ready to go for it. He climbed up, pulled up his sleeve, and got his shot. He was similarly unimpressed with how bad it didn't hurt. James did the same thing.

After the three boys reported the shot to be completely painless (in what was no doubt a competitive show of bravado because I've had a flu shot and it definitely hurts but no boy wants to be less tough than their older brother), Mary bounced chipperly over to the exam table and climbed up. Ryan rolled up her sleeve, the nurse swabbed her shoulder and jabbed the needle in (with little fanfare, because as she mentioned, "We have a hundred and forty of these things to do tonight"). I watched as Mary's excited smile collapsed and her lip started shaking. She looked at Ryan, totally betrayed. Like the little boy in The Emperor Has No Clothes, Mary knew that everyone else was full of it and she was CRUSHED.

Ryan pulled her slumped body into a giant hug while the boys skipped off to the lobby to get stickers. It took two of us to thread her sad arm gingerly into her coat. She may never trust the brothers again.

Mary spent some time in the waiting room choosing her sticker and Charley approached me with a brochure in hand, "MOM. Did you know there's a flu MIST???" "What's a flu mist?!" Wes asked quickly. "Wait, did we not have to get a SHOT?!" James caught on "No shot? Why did we have to get a shot?! What's the mist?" I told him "The mist is just like the shot except they give it to you in your NOSE!" which is technically true but sufficiently unpleasant sounding to stop the argument.

The whole ride home was much happier than the ride there, with everyone clamoring to tell each other how much it didn't hurt. Mary sniffled.

Every time Mary has to move her arm she gives all of us MASSIVE side eye.

This morning they tried to go sledding on the frost using a pizza box. 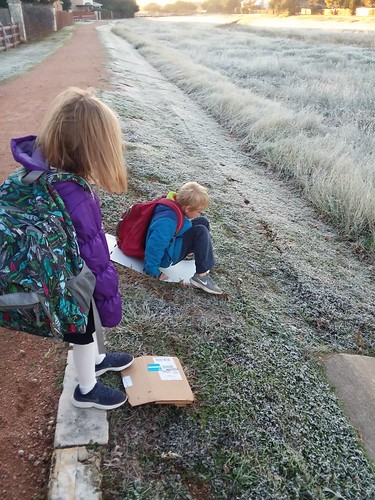 Yikes, I think flu shots are the WORST. I'm with your kids: I'd much rather suffer through a couple of achy days with the flu, than get a flu shot!