Further attempts to exhaust the children

I know you're dying to know how my second day of Professoring while Parenting (TM) went down and I can answer that question by telling you that I told Ryan, my parents, and several strangers at the grocery store, that there is no way in hell I am ever taking those children to work with me again. I have softened somewhat on that position, now that I've got some distance from the actual experience, but you GUYS. 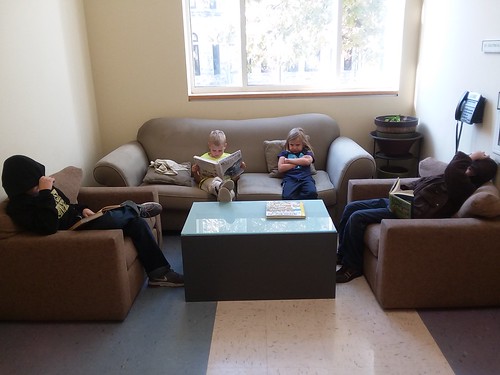 Here's a happy camper who has NO intention of quietly enjoying a book for an hour while I give an exam. Spoiler alert: BINGO!

One bright spot: James and Mary found these toolboxes a block away with a sign on them indicating that they were "Free! Tools included!" James spent half an hour inching the first one home six inches at a time before returning for the second one with a wagon. Treasure! 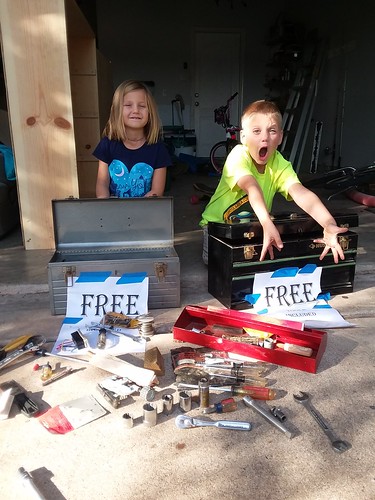 By the time I met Ryan at swimming to hand them off so I could go see Crimes of Grindelwald with my friend Rosa it was all I could do to not lay a patch in the parking lot.

Wednesday morning I had a PT appointment, which means they had to sit still in the waiting room for fifty minutes watching whatever they wanted on TV. It went marginally better but probably mostly because I was white knuckling through the day determined to not go to bed feeling like an unfun asshole for a third night in a row.

Things picked up after that because we stopped at a sub place for a picnic and then went for a hike. 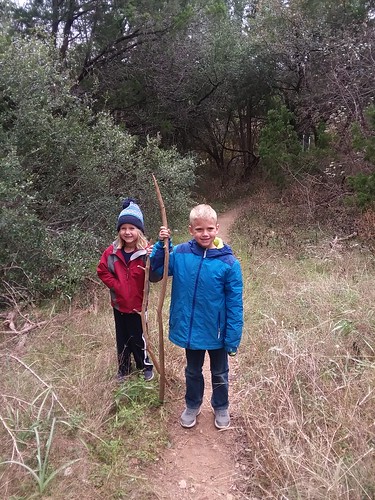 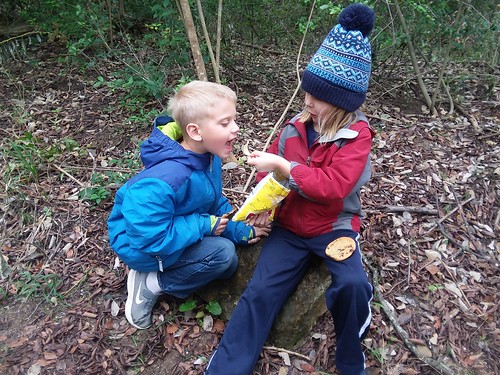 Mary shared their bag of chips by eating one and then feeding one to James, whether he was ready for it or not.

On our next stop, which was a park next to a wide stream, Wes somehow apparated to the other side. 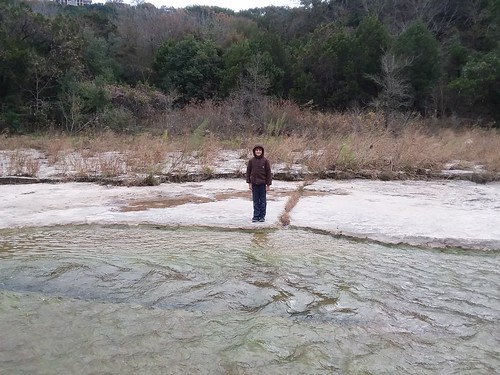 I told the kids "We can take off when Wes gets back" and then looked up to see him fifteen feet up the side of a limestone cliff, shimmying across to the other side of the park. The rest of us took an actual bridge to join him on the other side and found a giant, forty-foot wall of limestone. The kids ran behind the cliff and were goofing around. It had just occurred to me to go looking for them when I heard a tiny voice from above. 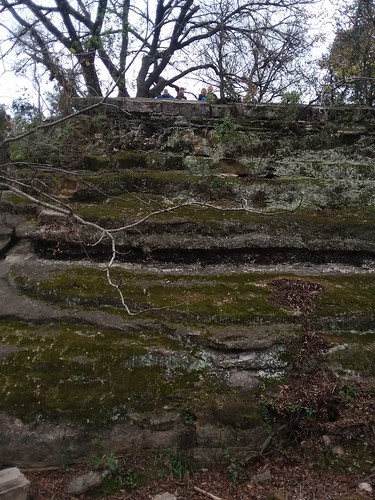 I climbed up there to demonstrate some measure of parental responsibility. 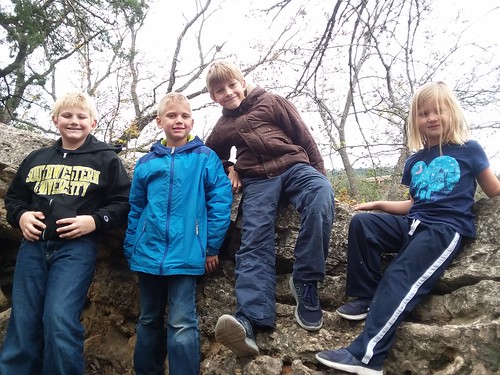 It was a little less scary from the other side.

After nearly an hour of climbing around on giant boulders and jumping around like goats, we were walking back to the car and James tried to jump between two landscaping boulders and severely twisted his foot. Wes and I helped him hop to the car where he rallied by the time we got home. He was still limping bad enough the next day that I texted my podiatrist friend who diagnosed him with a shrug and instructions to "watch it". It was much better today by the time we had lunch with the same podiatrist this afternoon, and after he watched him walk around a little at my request, James and his two kids spent thirty minutes running in screechy circles around an apartment building next to the restaurant. Phew, saved an unnecessary copay! And a broken foot!

Wednesday night we made pies and played board games. It was just as cozy as it sounds. 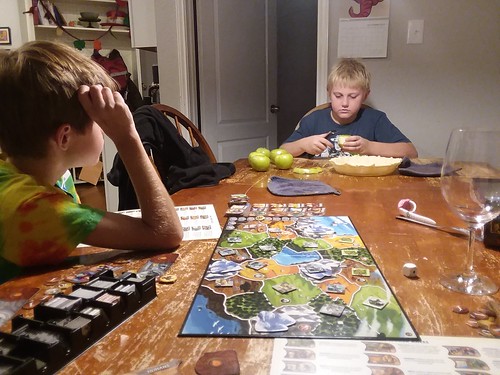 And Thursday we spent the day at my parents' house having a fantastic Thanksgiving dinner with mountains of food and wine, great company, and four kinds of pie (Once, in a small town newspaper in Maine, we read an advertisement for a church supper, which listed the menu as "Stew, cornbread, green salad, and of course, pie" so now we always say "Of course, pie."). After an afternoon eating and playing in the woods and paired with their inability to read analog clocks, the kids went straight to bed,as a matter of course, at six PM. Ryan and I had time to watch an entire movie before I fell into a pie coma.

I woke up early today for a row and then we spent the rest of the day hiking. We only intended to go for a couple of hours and then eat lunch at this taco place right by the trail head, but we ended up having so much fun, meeting friends for lunch, and then heading back to the trail afterward. We spent six hours and two of the kids were completely soaked from head to toe when it was time to go.

James was the first to fall in up to his shoulders. 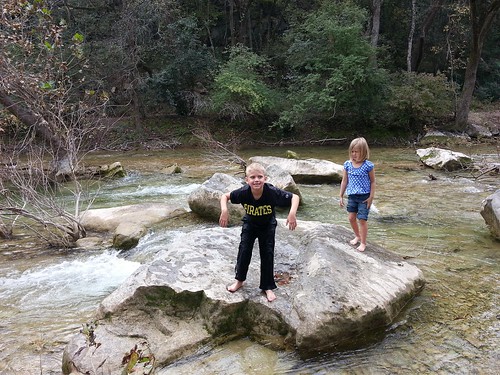 It was so pretty. 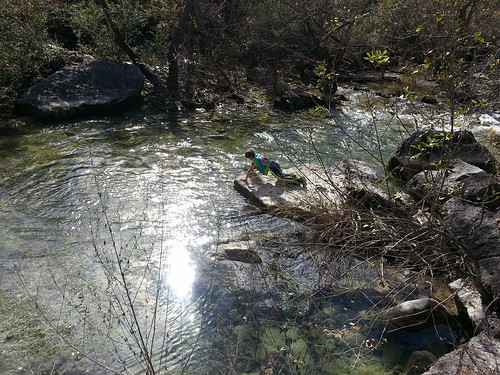 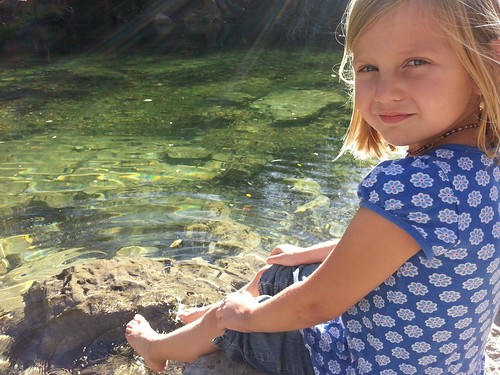 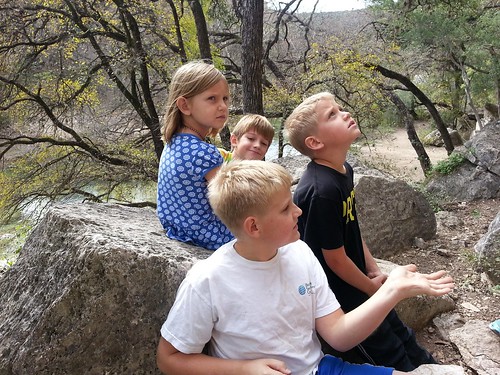 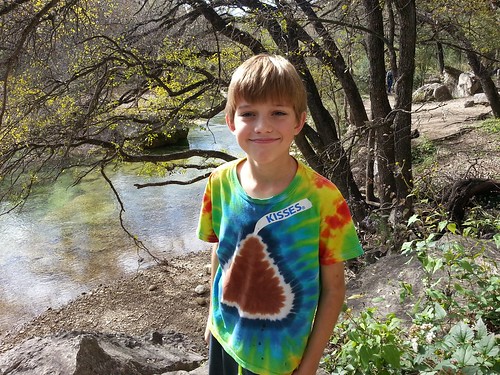 I just Google Earth'ed our route so I could tell you our impressive total, but turns out that we spent four hours hiking a little bit more than two miles. Stopping for accidental swimming really cuts into the miles you can cover, but it wore out the kids all the same, so ALL THE BETTER.

Wes walked easily three times as far as the rest of us and spent most of the time running. Running up hills, running over the trail, running up rocks. And after all that, while the little kids and I waited at the trail head, after hours of this, he came jogging up the steep trail holding his sopping wet shirt in his hand. I do not know what fuels that kid, but I'm imagining some kind of nuclear power plant. Or maybe it was the two tacos he had for lunch. At any rate, keeping these kids inside now seems cruel and I'd do well to remember that the next time I need to take them to work with me, which will be never (this is not true). Ryan's thinking of a bike ride for tomorrow.
Posted by Becca at 7:39 PM

Kids in nature is the BEST! I recently took my kids (ages 8 and 11) on an 11 mile hike, and I was genuinely surprised at how little they complained and how much they enjoyed it.