Somehow Thanksgiving is next week and the weather is about to go all to hell in the morning. Ryan lit the pilot light for the gas fireplace and the students are becoming increasingly surly. It must be November.

Saturday we had a birthday party for Charley and Wes at a bowling alley and even though there were five sixth grade boys, four fourth grade boys, two second graders, and two kindergarteners, (and one three year old!), it was really fun and not that insane. When the bowling started everyone was so happy and cute that I thought "We could just bowl the whole two hours, this is awesome!" But around the fifty-five minute mark the sixth graders started getting punchy and bowling with two balls at once and it looked like a war was about to erupt in the fourth grade lane, I was super happy when the party helper came over to tell me the pizza was ready back in the party room. There are no pictures of this occasion partly because it was dark in the bowling alley, partly because I was trying to model not being on my phone all the time, and partly because it took us like fifteen minutes just to get everyone the right size shoes and mostly because there were a lot of moving parts.

But this was the first birthday party we have had in years that involved things like planning and entertainment and an actual Evite, rather than a frantic series of same-day texts and last minute transportation change request forms at the school. It felt delightfully easy (yes! Even easier than the pool pizza party we had for Mary and a couple of friends that ended with head staples for Mary's best friend Jones!) to show up half an hour ahead of time, Costco cake in hand, and then just walk away from the trashed party room at the end of the afternoon.

We gave the kids goody bags with a deck of cards and a pack of gum each, with a handwritten card Mary made for each one that said "Thanks for coming". I worried irrationally that it wasn't enough, but the kids were so excited. And I'm assuming the parents were grateful that I wasn't sending home another bag of candy a week after Halloween.

And then we went home to get ready for the friends who were coming for dinner. Because I know myself and because I didn't want to be anxious about dinner and let that make me into an impatient jerk at the end of the birthday party, I cleaned up the whole house and made two batches of chili Saturday morning, so that after the party we would have ninety minutes to just drive home and walk in. And it WORKED. All I had to do when I got home was a quick stir of the chili warming in the instant pot and dump the kids' chili into a pot and put it on the stove, shred up some cheese, and we were good to go. The friends brought some amazing cornbread and three kinds of beer selected to pair well with the chili (being friends with a brewmaster is fun this way) and three great kids that my kids have missed now that we no longer live across the street. There was much commotion and laughter and leftover cake and beer and chili. The kids had the run of the house while the adults lingered at the table and mitigated kid drama from afar. It was so cozy and fun.

And tonight we have leftover chili (though we did finish the cake with lunch) and corn bread and beer, so the party continues.

We went to church this morning and the boys all wore matching shirts, so I tried to get a picture on the prayer garden like we used to do. 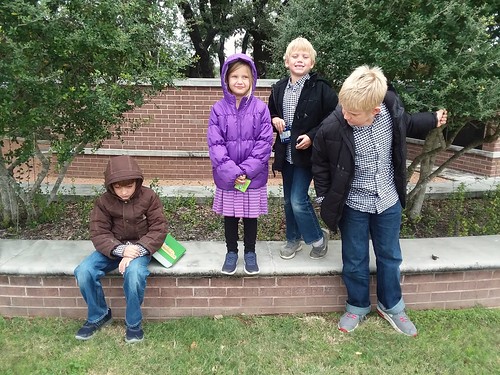 Wes is ticked, Mary is adorable, James has to pee, and Charley wants to know why Wes is pissed.

I took everyone else to find a seat while Ryan tried to find out what was wrong with Wes. I looked back and saw them come in the back doors, but they didn't actually come to our seats until about twenty minutes into the service. Ryan leaned over and told me "He was mad because he couldn't bring a toy to church with us. I had almost calmed him down enough to come in here, but then he pulled away from me and accidentally body checked an elderly woman and we had to start all over again."

Wes and James and I visited an open house on our street and then walked home, where the kids found this big pile of "OMG FALL LEAVES!" that someone had presumably swept into the street with a leaf blower. Making leaf angels in a six foot long pile of brown leaves in the street is like peak Texan fall behavior, but they are so sincere and adorable (until they brought them home and were about to dump them in our yard). 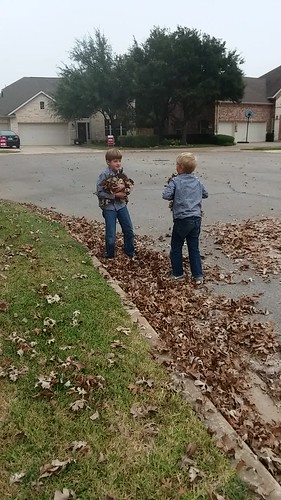 We have spent the rest of the afternoon doing homework and practicing instruments (kids) and sitting by the fireplace wrapped in all the fleece things and under a blanket, even though it is fifty out right now and I should really leave myself some room for tomorrow when it is in the low forties and Tuesday when it is in the low thirties.
Posted by Becca at 2:40 PM

The colder weather is so cozy though! I'm on the East Coast and was surprised it even gets into the 30s in Texas...guess that shows how much I know about Texas!