This weekend DID NOT require a spreadsheet, you will be happy to know. In fact, it was so open we were able to have our regular Saturday morning Power Hour, in which we all mobilize and clean the house for an hour before we start our weekend in earnest. The kids are responsible for their rooms and only have to address four areas (trash, dirty clothes, toys, and books) and get it to the point where I can vacuum and they can safely evacuate in the event of an emergency. Maintaining some civility in the house that we (I) can live with (barely tolerate) during the week is much easier if we push it all back on weekends. While they did that I wiped down the entire kitchen with PineSol, including all the graying fingerprints and mysterious drips on the cabinetry. It looks amazing.

And when that was over, I heard about a car show at a church near us that we could go to for the cost of a can of food each. We gathered up as many unexpired cans as I could find and headed over to discover that NOT ONLY was the car show fun and free, there were ALSO bounce houses, snow cones, magic shows, Bingo, pony rides, a petting zoo, AND LUNCH. And the kids got free cupcakes. We got there about an hour before a massive thunderstorm and made sure to hit all the outside fun before it started pouring. I used my ticket to pick out a free plant, the kids tried all the bounce houses. Mary rode a pony. Ryan and Charley checked out all the cars. I didn't know where anyone was for much of the time. Classic.

It's gotta be some kind of milestone when your kid suddenly looks too big for the poor pony. Thank goodness James wasn't interested. 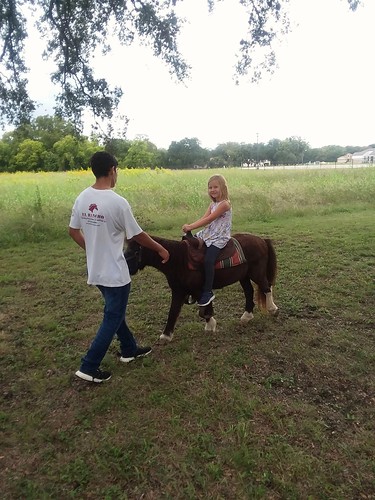 Ryan and I were lingering in the gym where we had lunch while the kids ran helter skelter and did things. When it was time to leave we couldn't find Charley anywhere. Ryan went to look for him and then came back smirking. "You have to see this" he said. He led me down the hallway to the Parish Hall where Charley was happily playing Bingo between a pair of elderly ladies.

After that we were all scheduled to go to a birthday party for two of the kids' friends. Only when we got there we discovered that it was actually a dropoff party and the hostess insisted we leave ALL FOUR OF THE CHILDREN there. FOR THREE HOURS. "Go have fun! You guys need it!" she said.

On the way out her husband reassured us that they can handle anything our kids can throw at them due to them having met working with kids with occasionally violent behavioral problems. "As long as one of them doesn't try to bite us, we should be good" he said.

We went straight to this bar we like where they had a live Polka band and ordered tacos and giant pretzels with beer cheese, and beer in souvenir steins. We sang Polka covers of "Sweet Caroline" and "Mama Don't Let your Babies Grow Up to be Cowboys" and then sang a German toast IN GERMAN and now I can cross communal singing with my beer stein in the air off my list of life goals. I didn't know I could still have that much fun. Polka cover band.

After that we went to the library to replenish our supply of weighty YA novels (for Charley) and submarine non-fiction (for James) and then picked up the kids, who were all sticky and sugared up and definitely ready for showers and bedtime. After bedtime I refilled my souvenir beer stein and folded six loads of laundry while I watched Anchorman.

So I call Saturday a WILD SUCCESS.

But the real point of this post is that WES IS TEN! I don't know how or when that happened. He has had a tough year and has clawed his way back to health and he HUGS US AGAIN and not just hugs us, but hugs with his arms and his legs and holds on so tightly that you can let go and he will just hang there like an enormous barnacle. We love him so much and I will never again take his easy smiles and laughter and hugs for granted.

One thing I will always remember about his tenth birthday is that I hastily wrapped all his presents in scarves from my closet because we were in a hurry and the wrapping things were downstairs. He opened all his presents with great excitement and then admired the scarves for several minutes. Then he put on his favorite. Later when his friend Tommy came over Wes carefully selected a scarf for him to wear. He is so happy with all his new scarves. This was... not what I originally intended? But I am so happy to let it go on as long as he wants. 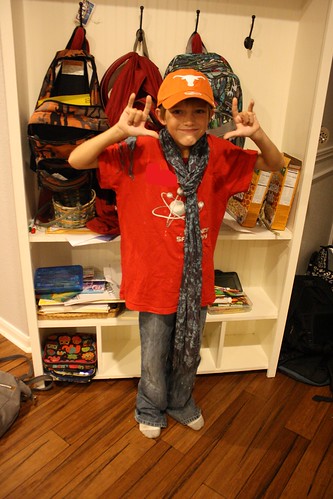 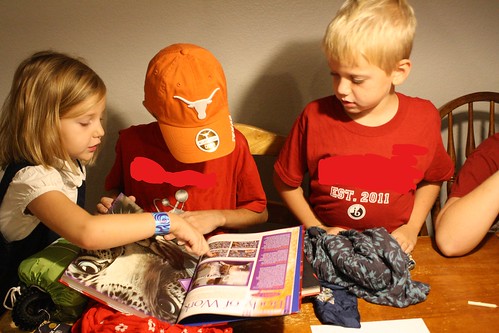 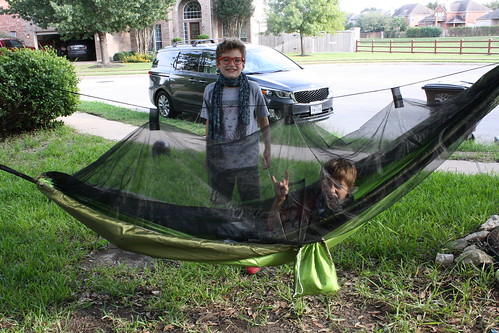 And we finished the day with a giant spaghetti dinner for Wes and his best friend Tommy's family. All ten of us squeezed into our breakfast nook eating and laughing. It was the best. I celebrate Wes every day. But it was especially nice to do things Wes's way for a day. He is a wonderful boy and we are so proud of him. Happy birthday to Wes. MANY happy returns. 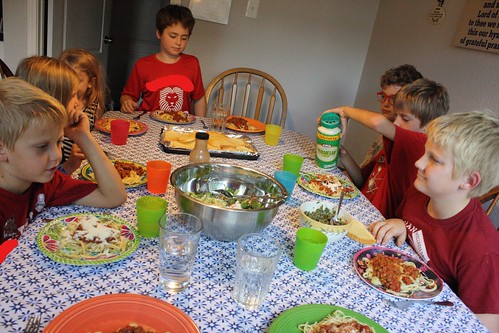 Happy Birthday, Wes!!! To an amazing, wonderful year!!
Your date adventures are always so unique! I think a trip to Texas may have to be on our list. We still consider Target an exciting way to kill a couple hours :)

I wish you'd post more frequently! Just discovered your blog and love the amusing/upbeat/snarky tone of your writing. :-)

Huh...did you delete your last post? Why? I'm surprised...I'd read it and really enjoyed it!