The kids have the entire week off for Fall Break and I was itching to get out of town, but I didn't want to spend any money because I'm saving up for a fancy water heater that heats water instead of draining it all over James's closet. Padre Island National Seashore is four hours away and since we have a fourth grader, we could all get in for free. AND, we could camp there for fourteen dollars a night. When I told Ryan that we could stop at our favorite Whataburger on the way, he was on board too.

On Saturday morning I called to see if they had any tent sites available and they told us that they had plenty of primitive beach campsites available. When James asked what a primitive campsite was, Charley's eyes lit up and he said "You get to poop in a hole, James!"

So after buying some biodegradable toilet paper, taking James to urgent care for a strep diagnosis, and swinging by the pharmacy for some amoxicillin, we were on our way.

(We didn't know James was sick until he told us offhandedly that his head hurt and his mouth hurt when he swallowed and his neck clicked when he turned his head. Apparently this had been going on for some time. I didn't want him to get worse while we were out of town, so I took him in just in case. Boy was I surprised when it was strep! We discussed briefly me staying home with him, but tonight he said "I knew there was a chance I would get better and you told me there would be s'mores, so. I'm glad I went.")

We arrived after dark and had no idea how the park worked, so we found the beach, found a cozy nook between two giant RVs, and set up our tent, using our van to block the CONSIDERABLE amount of wind coming off the Gulf of Mexico. Like I always say, before you decide to marry someone, you should definitely try to assemble a dome tent in the dark in a twenty-five knot wind together. Preferably while trucks drive by in the darkness, kids run around willy nilly, and the picturesque, but deafeningly loud ocean is about fifty feet away. If you don't have such a setting available, you could also try to to a jigsaw puzzle on Mount Washington. While Ryan and I wrestled with the tent, the kids dug "emergency poop holes" in the sand for the next morning. And then we put the kids in their sleeping bags and cracked open a couple of Hopadillos because DAMN.

When it started raining lightly at midnight, Ryan and I both popped out of our sleeping bags and ran around outside in the sand to put the rainfly on. I slept fitfully in my slightly damp sleeping bag for the next couple of hours until the crazy wind started to collapse the tent around us. I ran outside in my jammies and socks and tried to stake the rainfly down in the upwind direction, but the stakes wouldn't hold in the sand. So I ran back inside and asked Ryan to help me drag this big bin of cooking utensils against the wall of the tent to shore it up. When he saw how bad the whole thing was leaning over, we decided to take the rainfly back off. That helped with the collapsing problem, but two hours later when it started legit pouring, that was a problem. So we were back outside again fumbling with the rainfly in the dark wind and rain. I stripped my saturated shirt off, put on a dry one, and then laid on my wet, sandy sleeping bag and wet, sandy pillow to help Mary get back to sleep for the third time of the evening. The rest of the details are hazy, but eventually the sun came up and Charley and Wes had already wandered out of their tent and were itching to explore, so we were off and running. 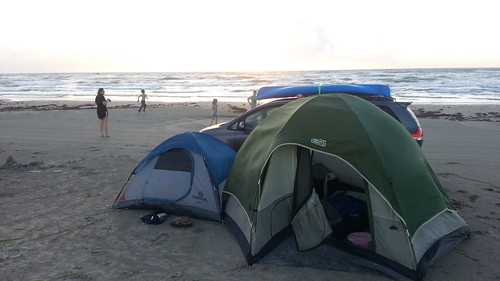 Since we had arrived after dark, the morning scene was completely magical. There were pelicans flying and swooping over the surf and a beautiful sunrise. 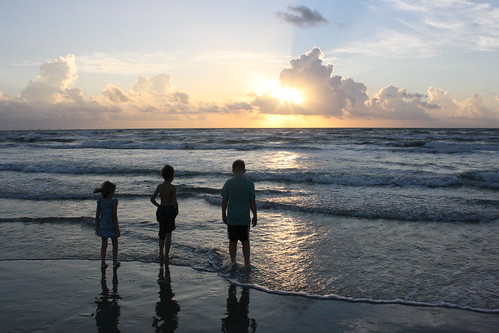 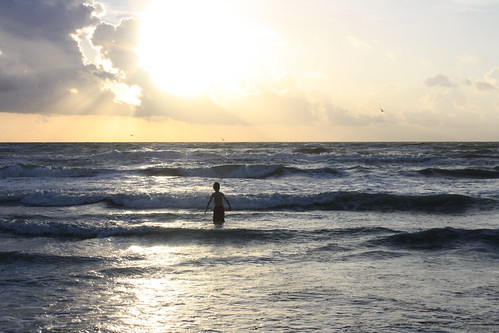 After an hour of frolicking it became apparent that we were not cut out for primitive camping. Mostly because of the water. We had, for the six of us, several ounces of water in the bottom of a topo chico bottle that James had last used, rendering it a biohazard for the rest of us. We couldn't make the pancakes we had planned on and we couldn't even make COFFEE for goodness sake. There was also no surface for twelve miles that was not completely covered in sand. Sand was everywhere, including my teeth. I couldn't go to the bathroom because there were no trees to hide behind, and THERE WAS NO COFFEE. Ryan and Wes went off in search of water (this sounds like Oregon Trail BECAUSE IT IS) and possibly a more civilized campsite. They came back having procured both water and a campsite, so we packed everything up and headed off.

New camp: less sand, more fresh water, and a picnic table. Sadly, we had to leave the poop holes behind. 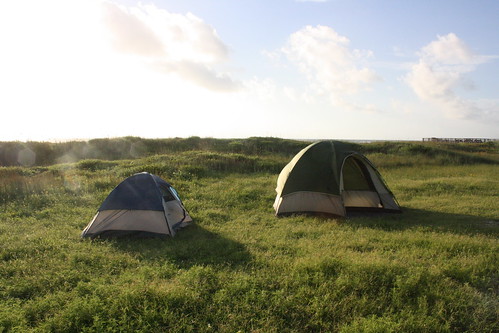 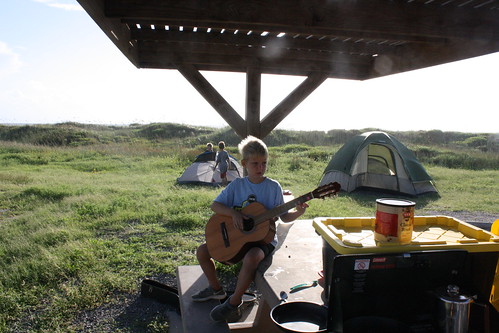 The kids picked up where they left off. 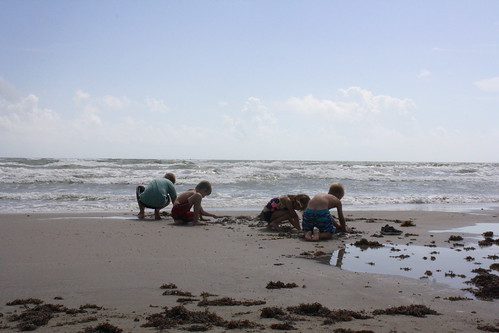 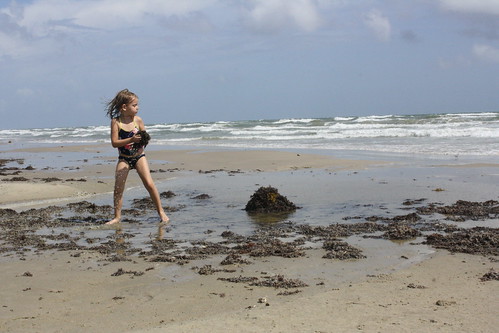 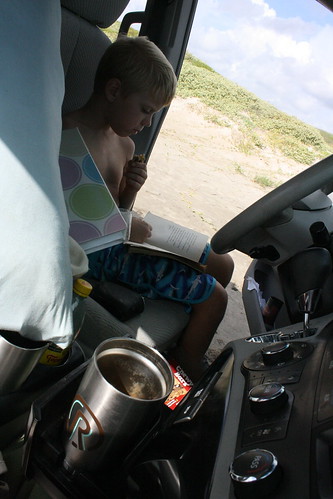 We took the boys fishing and Mary fell asleep on the disgusting pier in the pretty Tea Collection dress she had carefully packed in her Barbie suitcase. 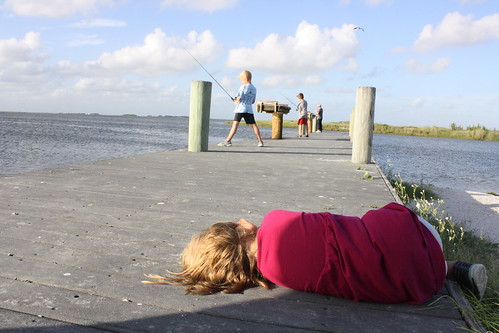 Made some smores after dinner. 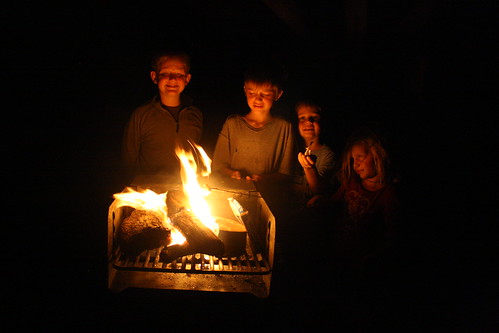 This mornign we drill sargeanted everyone through the Packing Up of the Campsite then headed to the Laguna Madre for paddling, more fishing, and swimming. 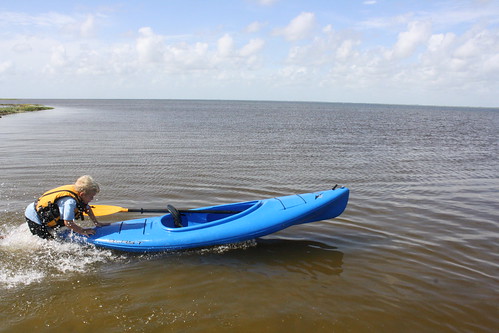 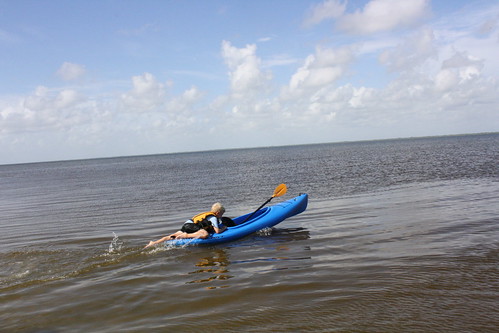 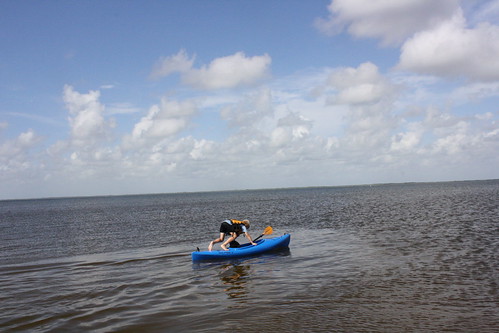 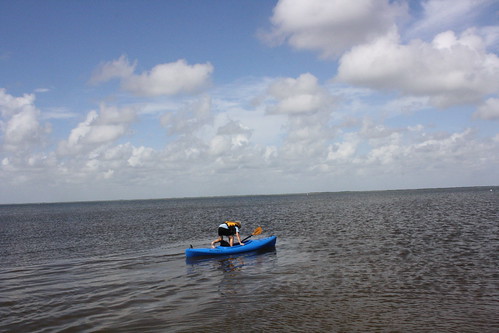 He did perfectly four or five times in a row until the time when he showed Ryan, when he capsized and momentarily became stuck under the kayak before popping up on the other side and exclaiming. "WOAH." 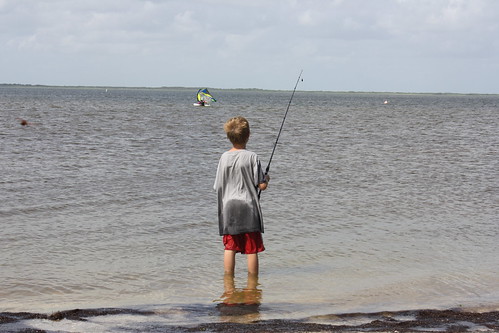 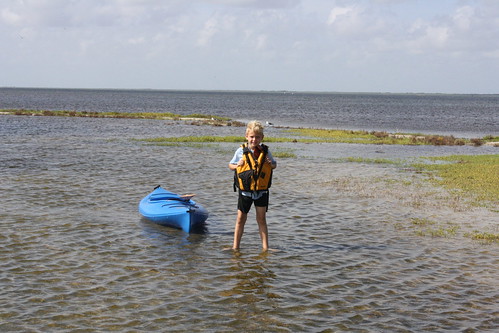 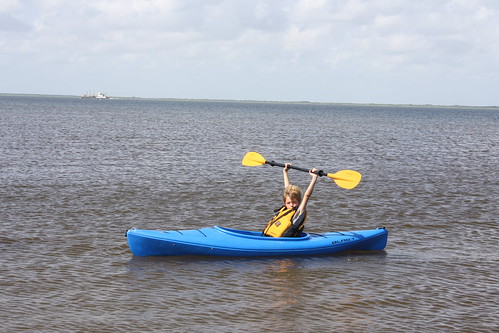 Charley took this picture, which looks really sweet, but is actually a moment when Ryan was whispering a funny but rude remark about this guy who was windsurfing nearby who kept yelling rude things at the instructor. 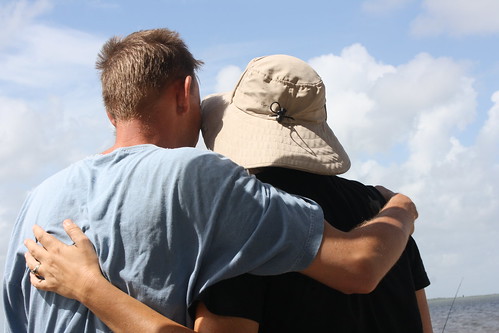 The drive home was LONG and RAINY. Giant thunderstorms every few minutes. I slapped some breakfast tacos together for dinner while Ryan made everyone take a shower. When I got upstairs for family reading time all four of them were wrapped in blankets sitting together on the couch. They get so snuggly when they have been through an adventure together. And it was so good to get away to do something fun. We all needed it. Seeing the kids so happy doing things they love so much, relaxed and laughing and happy, was really really good. Schmoopiness aside: bedtime was early and now it is time for wine and "The Good Place" on the couch. 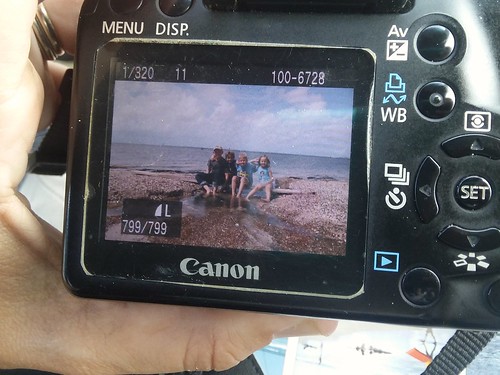 I love all of this! One of my favorite camping trips was when it rained so hard we all (including several dogs) had to seek shelter under the camper shell of a pick up. Adapt Adjust and Overcome!

I want to come visit you and all camp there together! Logistically I have NO IDEA how this would wrk, but OMG the kids would have so much fun! and it's GORGEOUS!

Also I love that picture of your camera! Perfect!