This weekend was so jam packed with activities that on Wednesday I took a few minutes to plot it all out on an Excel spreadsheet.  The spreadsheet had half hour time increments and two columns for each day--one for me and one for Ryan.  Friday afternoon I picked up all the kids at school and took all of them to Charley's swim meet.  Yes, all of them.  I had a perfectly sane arrangement made with our nanny to meet me at the pool with Charley and then to take the rest of the kids home where they could be their squirrelly after-school selves in the privacy of my house.  But then Wes insisted that he wanted to see Charley swim, so I took them myself.

They bickered THE ENTIRE TIME until Ryan got there with pizza and saved the day by TAKING THEM HOME OMG.

Charley had a single event on Friday, and it was three hours after the warm up AND serendipitously, my high school was playing another team and the game was ON THE OTHER SIDE OF THE PARKING LOT.  So Charley and I walked over and bought tickets and watched the first half.  Immediately after we sat down my old high school scored a touchdown and the band began playing the fight song and YOU GUYS, I still remember the bass drum part.  I haven't been to a game in TWENTY YEARS.  And it was in my old home stadium.  Trippy.  But awesome. 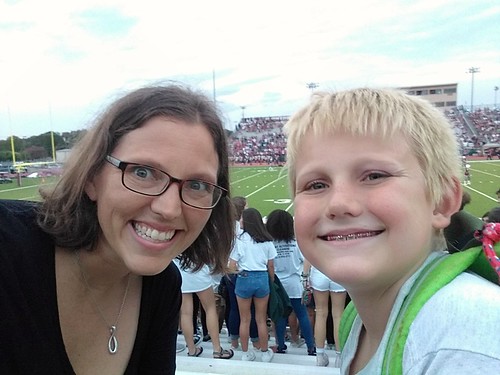 We returned to the pool and watched some of the older boys swim the 500 under a spectacular lightning show (erm) sweated it out through the girls' 50 free event, and then finally it was Charley's turn.

Did I mention that I was wearing my work clothes through all of this?  And that my work clothes were a pair of skinny jeans and a buttondown?  I scrounged through the car and came up empty for better pants, but did find a tshirt and a pair of Charley's sneakers to put on and was much more comfortable.

Charley swam his event at 9:30 and then we headed for home.

Saturday morning we had the Cub Scout bike rally, which Ryan was leading and James and Wes and Mary were riding in, so they were up and out by 9:00.  Ryan texted me around noon to exclaim happily that everyone came home with all of their teeth! (this was not true last year).

Charley's swim wasn't until 12:30, but the coach wanted him there by 11:30.  After a couple of hours at the pool he was done again, but he was so wigged out with anxiety about his swim that I let him decide where to pick up lunch and he ended up choosing a hamburger restaurant that is a good twenty minutes in the wrong direction from home.  The things we do for love.

We got home and Ryan and I gave each other a perfunctory high five as he walked out the door to take Wes to a birthday party (which was in his column).  I stayed home and helped Charley get ready for his first school dance.  This was a big occasion, which was certainly deserving of more than the assortment of freezer food I thoughtlessly slapped down on the table for dinner and the hasty words of advice I imparted in the car on the way to school (Just have a good time with your friends, and dance because no one knows what they are doing and it's more fun than standing around).  They had to dress like a movie character.  He made this with one of Ryan's undershirts and a sharpie. 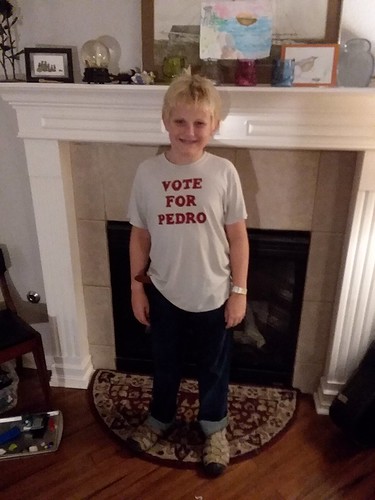 The best part of the dance was when he came home all flushed and happy and snuggled up on the couch to tell us all about it.  Something I've learned: Tweens do all their best emotional processing after nine PM.

**I just had to stop working on this to break up an ENORMOUS screaming fight between Wes and Mary.  She is asleep now.  So is Charley.  Spreadsheet weekend has taken its toll.**

Today Charley's swim was at 11:08 or something and Ryan and I decided that if we adhered to a rigid itinerary similar to that of a state visit, we could go to church as a family before the swim meet.  All that had to happen was that church, which began at nine, was an hour long and not a second longer, and that they put the donuts out immediately after the service, and that we didn't get stopped by the welcoming committee before we got to the exit.  That would give us approximately eight minutes and thirty seconds to make it to the pool with a comfortable margin before Charley's event. 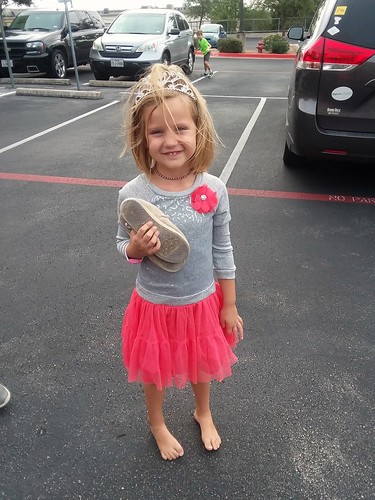 Our arrival at church was just as hasty and disheveled as our exit would be, but at least we had our sparkle on.

At 9:50, the homily was just rounding up and the minister took off his glasses and invited the new spiritual directors up to be introduced, a process that involved another short homily, before communion.  I slid Charley's speedo out of my purse and hissed hasty directions to the men's room, so he could go put it on under his clothes.  I was on the EDGE OF MY SEAT until it was our row's turn to go up for communion then slipped away on our way back to our seats to find Mary in the ladies' room.  By now it was rounding 10:15.  When I came out of the bathroom with Mary Ryan had already gotten all the kids out to the parking lot.  I told Mary we needed to leave and she began WAILING because we had promised donuts at the post-church coffee hour.

Important information: this church is TINY, so this entire family drama took place literally in the middle of the sanctuary.  It was QUITE the spectacle.

She and I ran out to the parking lot to find the three boys, who had FILLED THEIR POCKETS with pastries off the counter as the walked out of the church early.

We can never go back.

We all jumped in the car at TEN TWENTY FIVE and squealed out of the parking lot on the way to the (thankfully very close) pool only to realize when we arrived that Charley had NO GOGGLES BECAUSE OF COURSE, so Ryan ran with him through the front gate to buy a pair while I parked the car.  I parked about six miles away, scooped Mary up and we all ran to the pool.

Charley was event sixty-four and when we ran through the gate I looked up at the clock and saw that we were halfway through EVENT SIXTY TWO.  Ryan was still looking for the emergency goggle store so I pointed him in the right direction then went off to find Charley, draped over a folding chair, still in all his clothes, a BALL of anxiety.

I helped by shriekily demanding that he take his clothes off and get to the ready bench now now now run we are SUPER SUPER LATE.  Ryan slapped a brand new pair of goggles in his hand as he walked, I tightened them a couple of times and then he was OFF.

He made it to the ready bench in the nick of time (halfway through event sixty-three, hello anxiety, thank god that event had twelve heats because I'm not sure he would have made it otherwise) and Ryan and I found a spot on the bleachers, trusting the collective to raise Mary and Wes, who had disappeared into one of the tents to find some friendly kids with electronics.

Charley had an awesome swim (his other two swims at this meet did not go like he wanted and he was incredibly stressed out about it, so this was a Very Important Swim and it was GREAT).  I was so happy we made it and so happy Ryan was there to see it.  He looked so good, you guys.  I still can't believe we made these people who can do these hard things like swim in a race and look amazing and relaxed and keep their head on straight and not flip the flip out in the middle of the pool (like I would in the same situation).  His coach came by and patted him in the head and kind of chucked to himself because I was full on bear hugging a soaking wet Charley in my church clothes (WE CELEBRATE EVERYTHING IN THIS FAMILY, THANK YOU VERY MUCH, HE ALSO WENT TO HIS FIRST DANCE LAST NIGHT AND IT'S JUST A LOT, OKAY?).

And then we went to the good donut place on the way home, because obviously, and now Ryan is at a den meeting with James (his column) before we all meet up at another friend's birthday party (merged and centered).

No one did homework, practiced their instrument, or showered this weekend.  Mary and Charley are both asleep.  But we did it.  ALL.  Everything on the spreadsheet.
Posted by Becca at 12:29 PM

I love the analogy (metaphor? Simile? It’s too late to google but I love it.) And yay for Charley! I’m so vicariously proud of him for all the things!

What a week-end!! I'm amazed you still managed to squeeze in some picture taking :-)
Thank you for sharing.