I have three lecture courses this semester. I usually have two lectures and a lab, which should be the same amount of work, but really the lab part is always fun and already planned and usually only meets once a week, so this third class is feeling really heavy right now. I'm making it, but it is definitely feeling just like, MORE, you know?

I assume that is why by nine o'clock every night I find myself sitting stiffly on the couch with a thousand yard stare for several minutes before half-watching an episode of Father Brown before dragging myself up to bed around ten. Tonight I might try skipping the Father Brown part and just going to bed at nine. Actually I have plans to hang out with a friend at her place tonight. But it's a good friend so she'd probably not mind if I fell asleep. #thisisthirtysomething

In the midst of all the overwhelm, this morning was a microcosm of the chaos that has become this semester. I row on Fridays, so I set my alarm for 4:45. I conked out about 10:15 last night half hoping for a massive thunderstorm over the city around 6:00 in the morning.

Instead I awakened to a completely clear radar and a mysteriously clogged right ear that was ringing loudly even though I couldn't hear normal sounds out of it. I stuffed myself into my workout clothes and blearily made my way downstairs to find the coffeemaker, which had been programmed the night before, out of water. Filled it up and restarted it while I stuffed two of the kids' granola bars in my mouth. Got my coffee and grabbed my purse and headed out to my car, WHICH WAS NEARLY OUT OF GAS. Like, the indicator said I had FIFTY MILES TO GO. It is NINETEEN MILES to rowing and another TWENTY-FIVE back to school and those two numbers add up to WAY TOO CLOSE FOR COMFORT. But there was nothing I could do because of the coffee situation making me slightly late already, so I figured I would just deal with it later.

We all showed up and hopped into the boat and had a nice technique coaching session all the way down the lake to alllllmost our turn around point when we started seeing LIGHTNING to the south. So we turned around and hauled butt all the way back to the boathouse. It ended up being a pretty good row and we got back twenty minutes early, which was exciting given the EIGHT THIRTY start time for my Friday class.

Took a fast shower and blow-dried the underlayer of my hair so it would be suitably puffy for a proper southern lady, got in my car AND REALIZED THAT I HAD CHARLEY'S BACKPACK AND MARY'S BACKPACK and BUM BUM BUM! MY WOOOORRRRKKKK BAAAAGGG WAS AT HOME!!!!!

No problem, I reasoned, I will just ask Ryan to bring me my work bag, we can meet at the gas station by the school, I will get gas, we can switch bags, and then I will have plenty of time to get to school, prep for class, and go.

So I got gas and waited for them, feeling like a freaking logistical wizard and happily scrolling through my Facebook memories. Ryan and the kids arrived and pulled up beside my car. I passed the kids' backpacks to them through the windows and smiled expectantly at Ryan.

And this, readers, is where you admit defeat and cancel class.

This is not ideal, but I have PLENTY OF WORK to do. And I will do it at home. Until my lunch meeting. 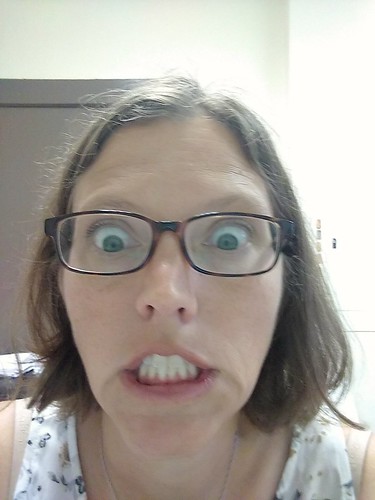 Apropos of nothing: I want a dog real bad. I great big, stupid, annoying one that sheds everywhere. This is probably just a manifestation of my extreme aversion to writing a letter of interest for a proposal that for some reason has fallen to me even though I am remarkably unqualified.

I should probably get started on that. Back on the horse.
Posted by Becca at 6:41 AM

I feel you. But, you got a good workout in and you didn't run out of gas and the kids got backpacks for school so all in all you're doing great! We a have super large, super fluffy, drooly and very annoying (at times, not always) St. Bernard. I highly recommend. :)