School: since we can't afford to just sail and fish all year

Yesterday was a classic seasonal mishmash, with the return to school in the morning, an afternoon spent reclining in the shallow end of the pool with a friend while our kids goofed around and blew off steam, and a chili dinner, which I hate to make when it is hot, but is sometimes necessary as it is inexpensive, easy to make, and enjoyed by all six of us.

We had planned for a last day of summer blowout, with a trip downtown to visit the big cold pool one more time, another trip to the library, one more pass by Voodoo Donuts, and the little train in the park, but were invited to a lunch picnic at a pool with some friends instead. It was a nice bookend to the summer, which began the same way, with the same friends, and the kids had a good time. We planned to stay until my grocery pickup order was ready at 4:00, but by 1:45 Mary had her head down on an innertube and her fingers in her mouth, James was wrapped in a towel on a deck chair looking droopy, and no one was in the pool. We said our goodbyes and I proposed we go home for a movie. The kids asked if we could put blankets all over the floor and make it cozy. Mary immediately jammied up when we arrived.

We bought the kids alarm clocks this year after finally coming to realize that spending forty-five minutes dragging their lifeless forms from bed was a stressful way for all of us to begin our day. At 6:05 there was a chorus of beeping from all corners of the house, but only one kid actually managed to get out of bed and get dressed. Fortunately it was the one with the most Hulk-like morning mood, so even if no one else figures it out it is still an improvement. After I completely freaked Mary out by threatening to move to Canada when in quick succession Charley declared his brand new school shoes too small and Mary casually mentioned to Ryan that one of her new school shoes was missing, I made everyone some guilt-scrambled eggs and then we went outside for the requisite pictures in front of the house. 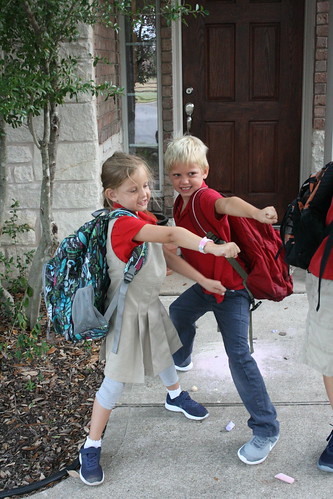 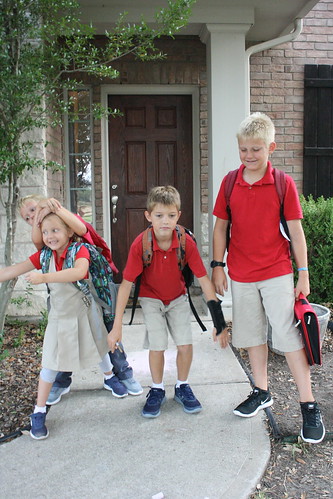 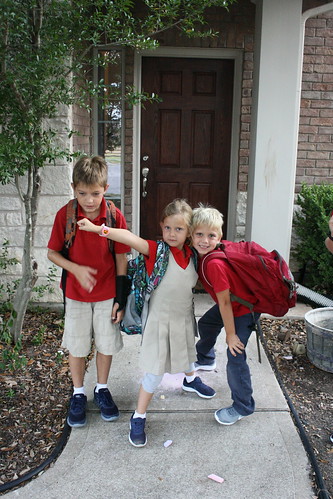 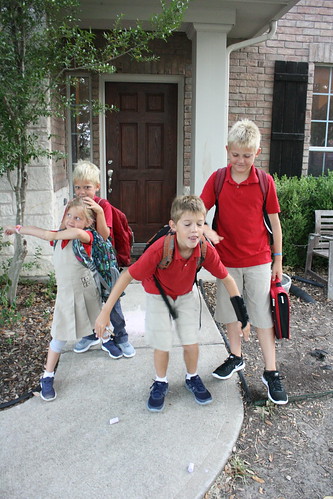 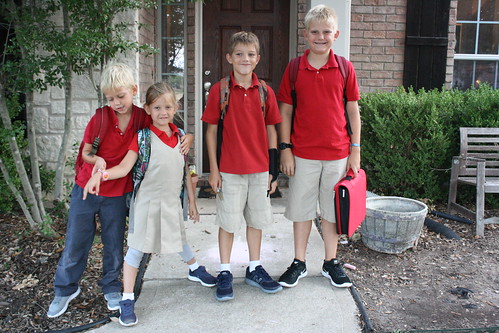 Mary, who let's not forget was four three days ago, suddenly became apprehensive about school after a year of begging to "go to school with James." Her biggest worry was that she wouldn't know when to raise her hand. But she gamely put on her uniform in the morning and strode into the building with her entourage (me, Ryan, James, and Charley--Wes gave us a quick hug when we arrived, then disappeared somewhere into the school). Once she was sitting in her tiny chair, after a hug from her teacher and some help opening the playdoh, she declared that she was ready to stay. 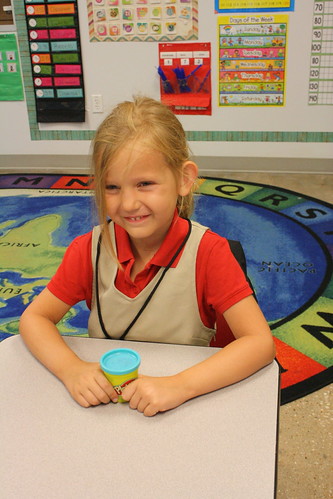 We dropped James off in his room, where he hung up his backpack and settled into his desk with little fanfare. He wrote his name on a little froggy nametag, got a quick hug and some brief instructions from his teacher and we were off. He was so worried about recess, since he was kicked out (his words) of the Boys' Team, a group he created (!) by some alpha boys. After a particularly tempestuous period of time Tuesday afternoon I finally asked, with exasperation, "JAMES! Are you worried about school tomorrow?!" and he spat back "YES!!!" before angrily sticking his thumb in his mouth and sucking vigorously. When I picked him up he reported cheerfully "I'm back on the Boys' Team!" 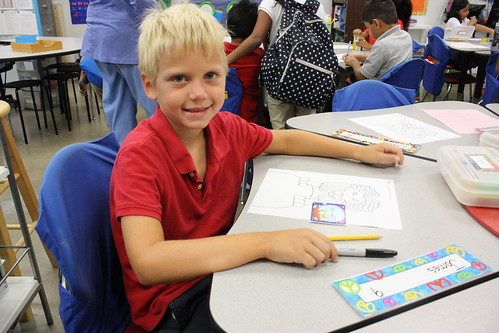 Charley, his locker combination scrawled on the palm of his hand in red sharpie, wanted to handle walking across the crosswalk from the primary to the secondary school by himself and I belatedly remembered to get a picture. He disappeared into the crowd and Ryan and I were left standing on the sidewalk alone, looking at each other like "Welp! That was that!" 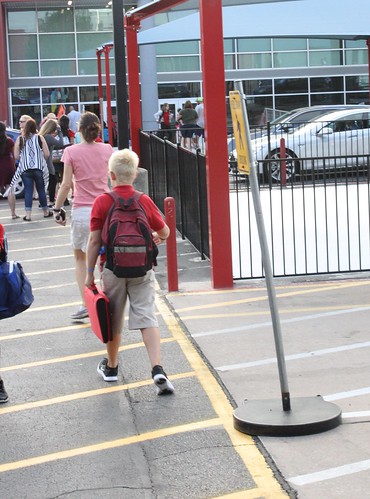 When I picked them up at 1:30 (after getting in the wrong color lane, naturally, five years at this school and I should really know to check and recheck the extremely complicated color coded pickup map before leaving the house. Also yellow is not the same as orange and I follow the yellow lane in the morning and the orange lane in the afternoon, DUH) they were full of stories and REALLY REVVED UP. I abandoned my plans for afternoon productivity and instead turned on PBS Kids and backed away slowly. Thank goodness for our pool plans. One kid was super pissed that he would not be able to spend the afternoon brooding in his room as planned and refused to put on a swimsuit. I acted casually and secretly tucked his swimsuit into the pool bag under some towels. He brought a book (a MUCH younger brother's book that he could read in about fifteen minutes) and sulked on a deck chair. As I was pulling the towels out of the bag I mentioned in an offhand way "Oh, looks like there's a suit your size in here if you change your mind" and walked into the pool with the other kids. After about twenty minutes of reading in the hundred degree weather, I saw him stand up, look around, slide the swimsuit out of the bag, and walk to the men's room. He joined us in the pool and we had a great talk about his day.

Dinner was light and filled with stories and everyone shared their "Amens and Aw-mans" (Wes's "aw-man" was that I served store-bought brownies, THE HORROR). The boys went off to angrily practice their instruments and Mary fell asleep on the couch in her bathing suit and school sweatshirt while I did the dishes. This morning was definitely crabbier and less exciting than yesterday and Ryan just texted to say that dropoff will make a great icebreaker for our evening conversation and that the short story is that he walked Mary inside again. He then texted simply "So much nervous energy. X4." I fully anticipate the verbal abuse that is coming my way this afternoon and will probably need to make something heavy with lots of cheese and carbs for dinner and also maybe will need to provide a half gallon of ice cream and six spoons.
Posted by Becca at 8:15 AM

Emotions are riding high over here, too, though school doesn’t start until next Wednesday. So much angst! (And I’m totally including myself.)