I only managed to stay home for a week before New England sucked me back in. This time I was travelling for a little girls' weekend called the School of Ice, where in addition to talking science over craft beers every night, you also spend the day at Dartmouth learning about extracting paleoclimate data from prehistoric ice.

I couldn't BELIEVE it when we got to try on the giant red coat on the first day! 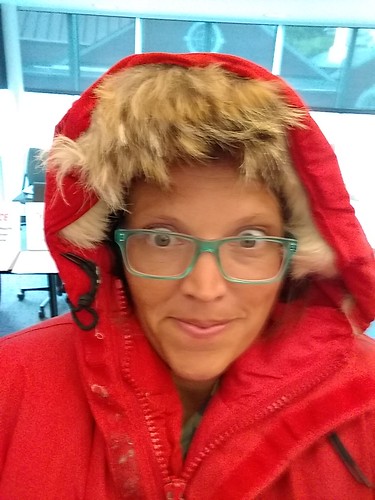 You can't imagine how much I've complained about cold weather over the years (you: oh yes I can), but apparently I was just wearing the wrong coat all this time because I spent a good forty-five minutes in a freezer set to zero Fahrenheit and I was toasty warm in my giant coat (My legs, if I moved in such a way that they touched the fabric of my jeans, were FREEZING).

Ice from the Old Testament. LITERALLY. 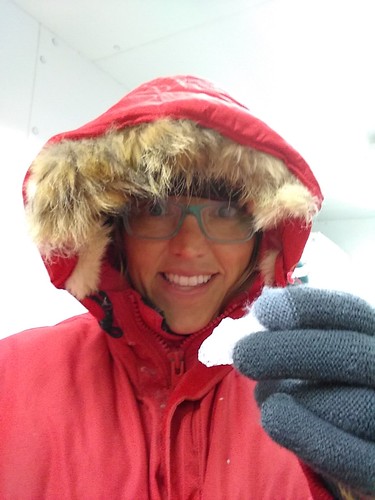 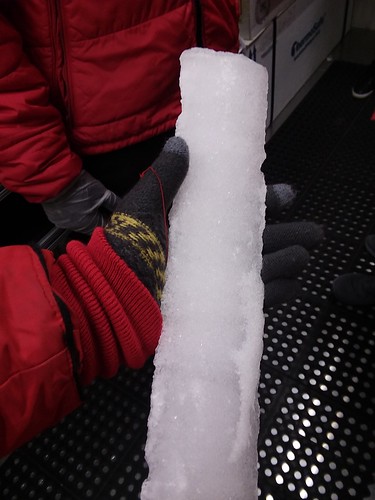 We went on a hike through the woods to look at glacial formations and dig up sediment from the bottom of an ancient glacial lake. Our guide was the woman pictured below, M, hanging off the side of a muddy cliff face where she climbed to show us some really awesome varves, which are layers of sediment that show the passage of time on the lake bed. SHE WAS AMAZING. 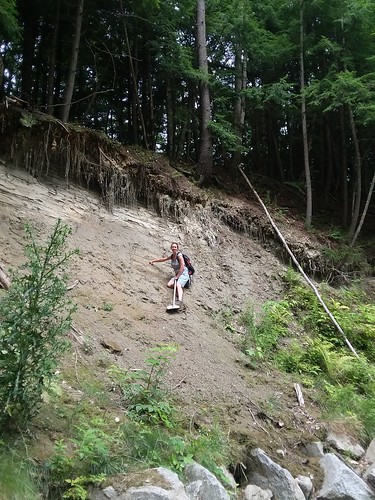 She powered up an esker, which is a formation caused by a meltwater stream inside a glacier or can also be called a big-ass hill, like it was a walk in the park while I struggled to keep pace and not look like a total loser by comparison (I kept up, but later realized how ridiculous I looked in my black skinny jeans). 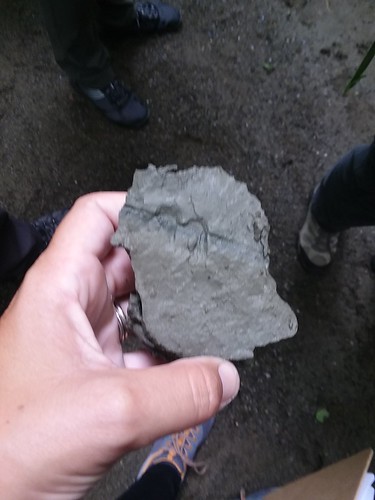 We walked to Vermont one night after dinner because it was like half a mile away. On the way back one of the workshop organizers casually mentioned how she and her family climbed Kilamanjaro. 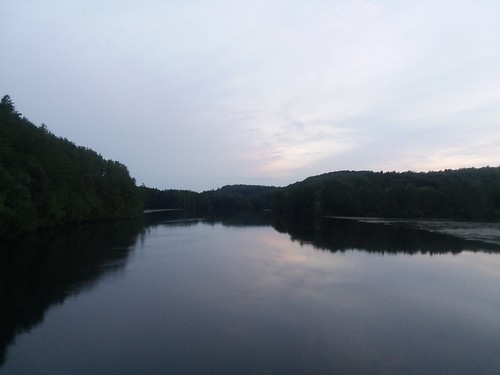 The next day we went in an EVEN COLDER FREEZER. NEGATIVE THIRTY-TWO CELSIUS. I found this all fascinating. I saw ice from 60,000 years ago! 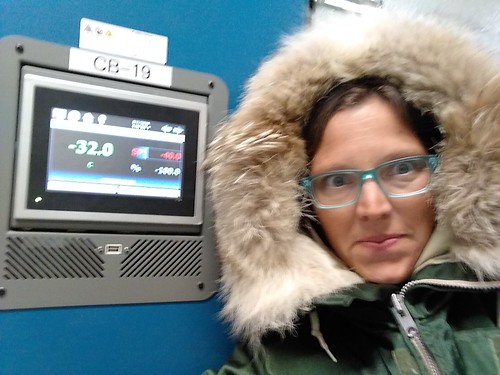 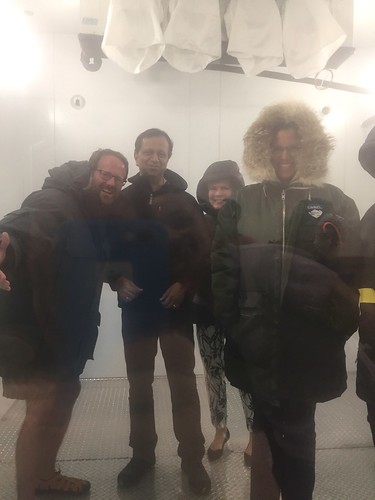 The Appalachian Trail runs right through town. You know this when you are there because there are signs and also because occasionally you are passed by a band of scruffy looking hipsters bearing backpacks the size of fourth graders. So I'm calling this a #lifegoal I can check off the list. 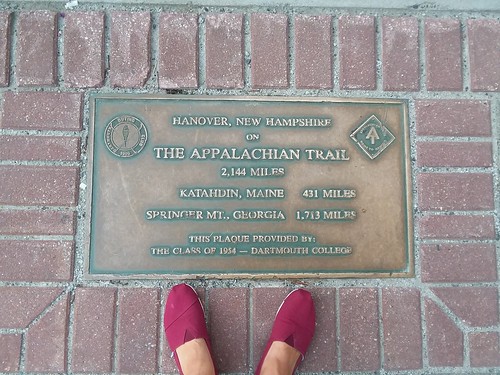 I hiked on the AT!

I was excited to get home on Wednesday night, but am already plotting my return. Someone told me it's pretty easy to work at Dartmouth if you offer to work for free, so that's one option (not really). I'm sure scenes like this have nothing to do with it. 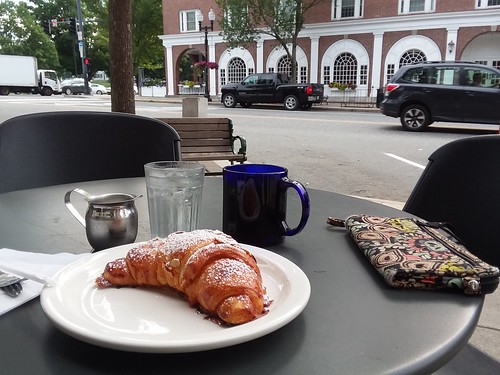 Back at home, Charley asked for watercolors so he could paint birds and the rest of us have been enjoying them too. 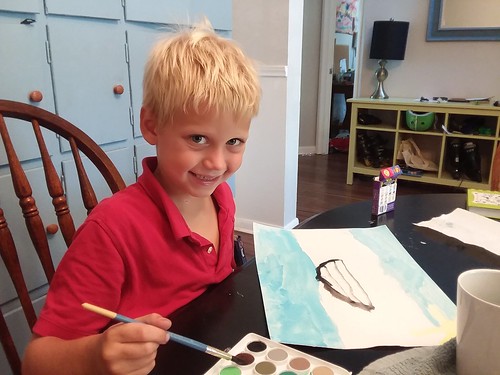 Some of my handiwork. 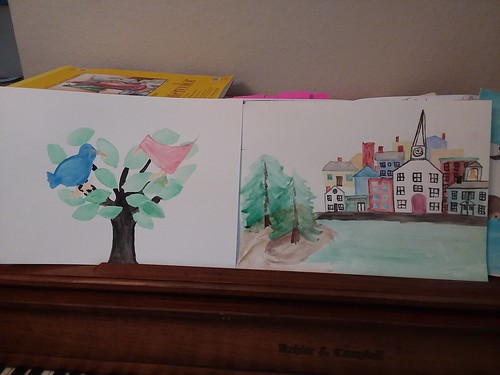 The new big library downtown has Harry Potter stairs AND a roofdeck! 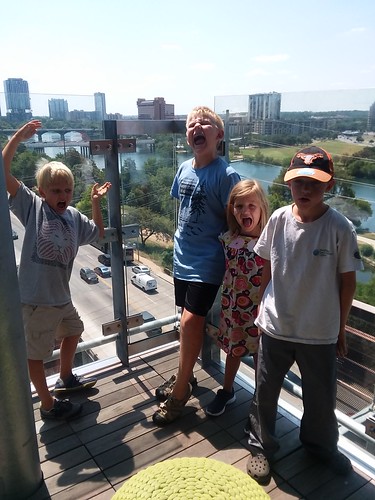 In other exciting news, TODAY IS MARY'S BIRTHDAY! 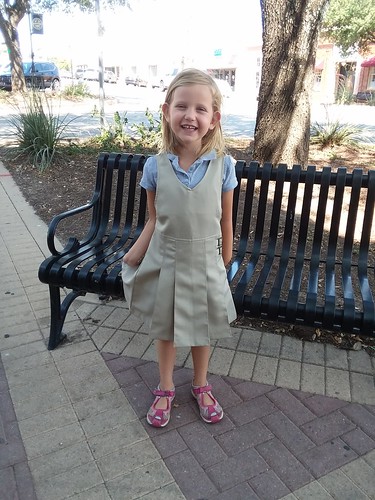 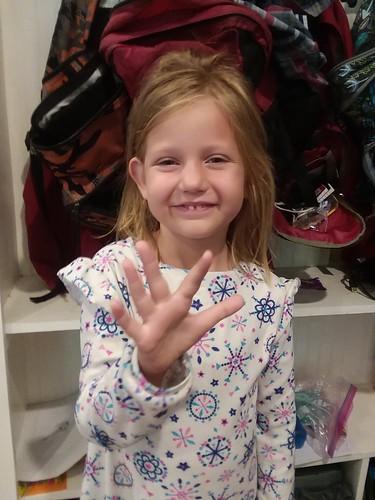 She had a lot of help with her new bike (which my sister handed down to her in almost perfect condition from my niece) from all the brothers, who have been keeping this a huge secret since Friday, when we met at the pool and Ryan and Charley snuck out to get it in our car. On Sunday I almost let her in the car before I remembered that the bike was still in there. Thinking quickly, I asked Charley to take Mary and go get the mail and then Wes hid it in the back of the garage. SO CLOSE.

She was SUPER. EXCITED. 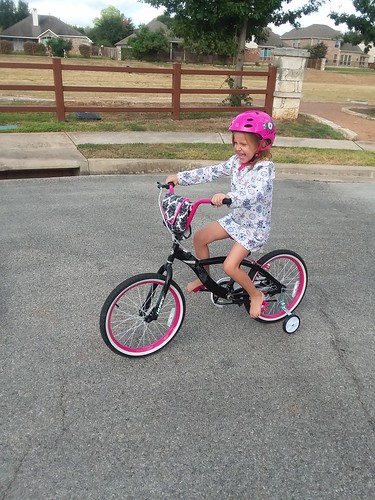 Right after I took this she said "Now my knees don't have to hurt when I ride my bike!"

In true fourth child fashion, she spent her birthday being shuttled around to all of her siblings' appointments. We had two orthodontist appointments, therapy, two piano lessons, guitar, and sixth grade orientation for this guy. 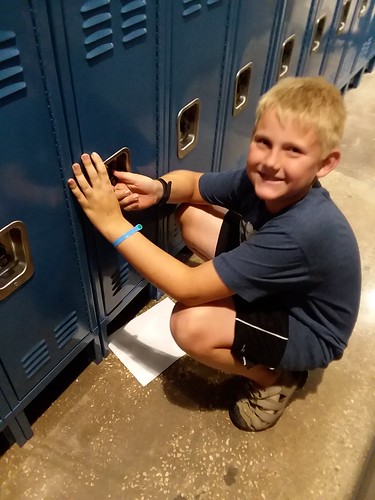 Unlike the boys, who ask for the same chocolate cake with oreos and a digger on top EVERY year (which I adore making for them), Mary asked for a brown and pink cake. But a brown cake with pink spots. And then it was a brown cake with pink circles with brown spots inside. The idea was fairly fluid, so Wes and I rolled out some fondant and got creative. The result looks remarkably like a virus under magnification. 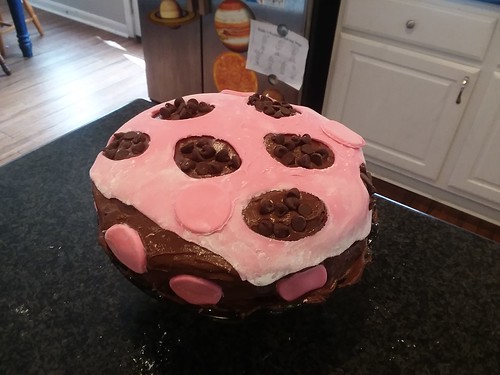 School starts on Wednesday. We will have a kindergartner, a sixth grader, and two in between. It's going to be an emotional dropoff but there isn't any time to dwell on it because I'll have to bang out three abstracts for the AMS meeting in the four hours we have (Wednesdays are early release). Just being in the building with Charley tonight, smelling the smells, finding all his classes on his schedule, checking out his locker, gave me MAJOR JEALOUSY. I LOVE BACK TO SCHOOL. Which is one reason I never left. But whereas he gets to have this totally new experience, my job will be largely the same as it always has been. This is why I have to sometimes go hold Old Testament ice and hike up glacial geomorphology features and hang out with really incredibly smart, accomplished people. Mary is so excited about school and also INCREDIBLY NERVOUS. Like, she is a WRECK. She practically BURROWS into my body every time I sit down and if Ryan is around she acts completely helpless. All day she is SUPER EXCITED but then as she is falling asleep she asks me "What if I don't know when to raise my hand?" It is sad and sweet and she will be an amazing kindergartner. James and Wes are both pleased with their teachers and the other kids in their classes and are looking forward to school starting again. Wes has the teacher Charley had for 4th grade and Mary has Wes's kindergarten teacher. It was an incredibly sweet moment when Charley showed Wes around his old classroom and then Wes showed Mary around his old classroom. James and his buddy William are in the same class which is good for us and TERRIFYING for the school because those kids are CUH-RAZY. For his part, Charley is READY too. Tonight I made him handle getting his own schedule and you guys, he was so relaxed and confident and polite and CHARMING OMG. He has a LOCKER and EIGHT DIFFERENT CLASSES and has to CHANGE FOR GYM. But he's ready. He is so, so ready. I honestly can't wait. But we still have one more day of summer and I plan to squeeze the LIFE out of it.
Posted by Becca at 9:05 PM

Happy Birthday Mary! And what a pretty cake too!