1. James got a couple more time improvement ribbons. One for fifty free and one for backstroke, his favorite stroke and the one he beat me in at the Polar Bear Plunge on January 1st, which was the original reason we thought swim team might be a good thing for him. 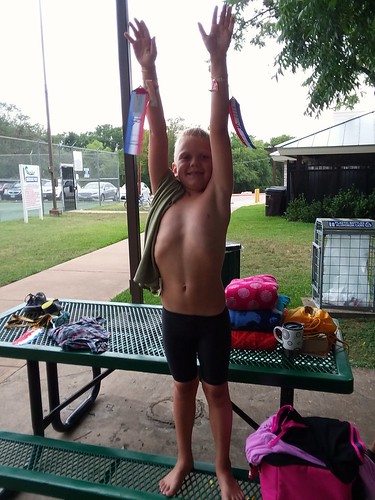 Wes dropped eleven seconds in his butterfly on Saturday. My kids are so much cooler than I will ever be. Charley attempted to teach me the butterfly the other day and when I got to the end of the pool what can only be described as a bow wave sloshed onto the pool deck like some kind of Sea World attraction. Super elegant.

2. We had a weird morning on Monday and I ended up having to drive the kids to swimming immediately after rowing, which meant I had thirty seconds to choose an outfit and otherwise prepare for a work meeting I had later that day. Which meant that not only did I take two kids to a work meeting, they were wearing Speedos and I looked like this. 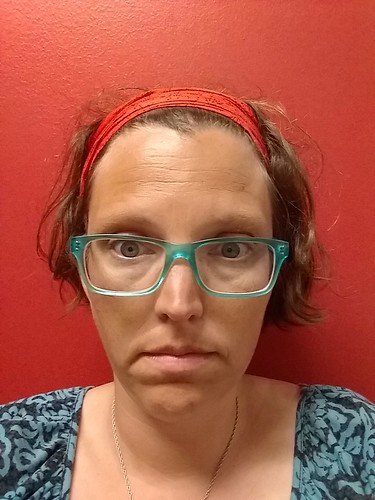 3. Between swimming and my meeting that day, we made a quick stop at the orthopedist, who took a new set of xrays on Wes's arm and declared that he's officially ready to ditch the brace except for when playing sports or riding his bike. He was bummed that he still has even those small restrictions, but today he got back out on his bike for the first time in fourteen weeks and it was GLORIOUS. And also, DUDE, you BROKE YOUR ARM IN HALF, it's kind of a big deal. Also pictured: Speedos. 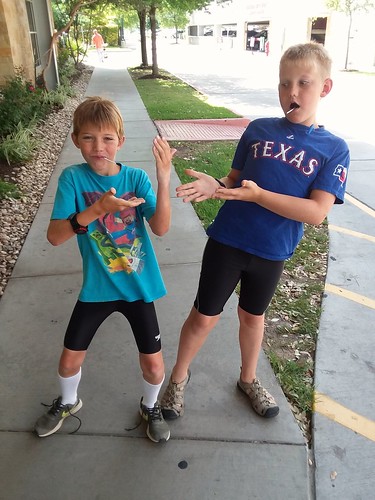 5. I bought a small table and chairs on the Craigslist when we moved in to this house with the intention of refinishing it one day. I thought it would look nice black with contrasting chairs, but the project fell to the bottom of the list. Last week Charley and I were home alone together all day while the other kids were at camp and on a whim I went to Home Depot for the supplies. They suggested spray paint. I did three coats followed by two coats of polyurethane so that the kids can play dominoes without destroying it and I am officially in love with a table. Before I moved it back into the room I switched the pretty, but awkwardly sized rug out with the one in Mary's room and now it is officially my favorite room in the house (except for the one where I sleep, because obviously). We only use this as a "dining room" on occasions when we have friends over and then it's where the adults eat while the kids destroy the kitchen. Most of the time it used for games, homework, letter writing, and music practice. And of course, turn three in the circuit the kids run around the downstairs. (I have to also point out the Birds of North America poster my friend Rosa gave me as a housewarming present that I still admire every time I pass it). And Mary loves her new rug. 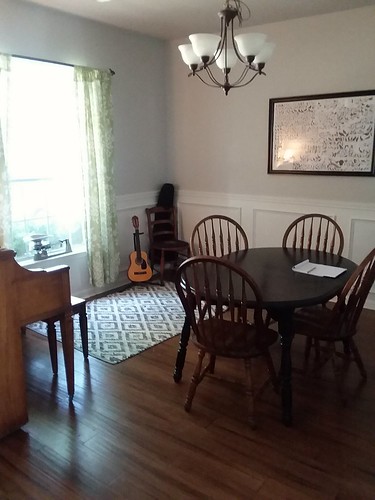 6. We had a DOOZY of an afternoon today. The kids had a group fight while in with the therapist (who they were seeing to talk about NOT FIGHTING SO MUCH) and everyone was straight up horrible to each other. When I inquired if we were a normal family she replied "A normal family with a magnifying glass, maybe!" She usually seems so unflappable, but today she was definitely flapped. When she walked us out to the waiting room to leave we found James OUTSIDE CLIMBING A TREE IN THE PARKING LOT. I left so frustrated and embarrassed that we canceled our pool plans and went straight home to stress-clean the whole downstairs. Also I asked Ryan to rent us a fifteen passenger van for the rest of the week because the therapist recommends giving Wes lots of space in the car because we can't keep all having massive scratching fights every time we have to run to the store for peanut butter. He laughed and then I responded that I was not joking. Not at all. I am DONE. Unfortunately, it is church youth group trip season here in the Bible Belt and everywhere he called was fresh out of giant vans. Still working on how to handle this problem without dropping a C-note every day on a giant van.

7. But the other side of that coin is that we gave him TONS OF SPACE, as recommended all afternoon. He spent a pleasant hour or two building an elaborate battle scene with alien army guys and blocks upstairs, rode his bike for a while, and appeared at the dinner table fresh as a daisy. He made us all blondies and then said he wanted to save them for tomorrow so everyone could have a popsicle on the back porch. Later James had a minor accident outside and Wes read to him while Ryan cleaned him up. It was so, so nice. I may forward this picture to the therapist. 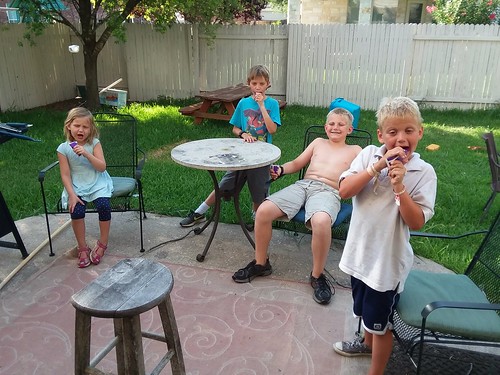 I don't know what the laws are in Tx (or how stringently law-abiding you are *cough*) but could Charley pass in the front seat? If I remember car pictures right, you have three rows which means that Wes could have a row to himself. Maybe that would help?

Hi, I've been following your blog for a long time but I don't comment very often; just coming here to suggest that Wes and Charley could perhaps take turns in the front seat. Texas law does not prevent any age from riding in the front--and with so many pickup trucks on the roads here, that makes sense! As long as they are buckled up, they'd be fine, and perhaps that would give everyone the space they need.