I awakened from a (finally) restful night of sleep (no really!)  Sunday morning to the happy hubbub of children building a fort together (as you will remember, they lost screens until Monday after the Incident in the car on Wednesday.  Interestingly, they have been playing together creatively WAY more than normal and I am considering taking the TV away for ever, not really).  We had forty five minutes to get ready and get in the car for church; since Charley was acolyting, we would need to leave fifteen minutes early so he would have time to suit up.

Ryan got in the shower and I headed downstairs to nudge everyone into the kitchen for some breakfast and all the various medications (two kids with daily meds plus one more with an inhaler, it's like that scene in Orange is the New Black were everyone lines up at the med cage).  I was feeling rested and the children were happy and calm.

I hugged each of them hello and inquired after their dreams.  We discussed the fun events of the weekend and what we were looking forward to the rest of the day.

I tell you all of this to set the tranquil domestic scene which existed at the beginning.  And also my cheerful, content mood.  This will provide needed contrast to what came later.

I think it's important to evaluate things this way--did I start out bitchy or did the bitchy develop as a reasonable reaction to recalcitrant and inconsiderate children?

Things began to unravel when I imposed the completely unreasonable expectation that everyone eat breakfast and put on clothing.  They milled around me in anxious circles as I made coffee and slapped together a few PB&Js.  I had to remind each of them approximately six million times to sit at the table and eat instead of orbiting the kitchen island talking to me and gesturing with their sandwich.

If there is anything that makes me tense, it is restless children in the kitchen and having to remind people of things.  Especially first thing in the morning.  The worst.

Blood pressure beginning to rise, I noted that it was 8:20, which meant we had 25 minutes remaining.  I herded everyone up the stairs to change into clothes.  They were SUPER SILLY and slow on the stairs and I was officially OVER IT.

On the way upstairs I nudged the giant lug of a preteen out of bed and told him he had twenty minutes to dress himself and eat something because we were going to church early so he could acolyte (which to him is a treat).

Upstairs I sat on the couch with my coffee and provided air traffic control in the form of reminding kids about every single article of clothing they needed to put on.

"Undies.  Always.  You always wear undies.  Even with long pants."

"That shirt is dirty."

At 8:30, Ryan wandered out of the bedroom, freshly showered and dressed.  At last it was my turn to get ready to go.  I had fifteen minutes, so I skipped a shower and hair brushing and focused on choosing a dress and shoes and brushing my teeth.

About halfway through this process I got SUPER IRRITATED that I wasn't going to get a shower and perhaps irrationally this turned into white hot rage.

I don't even like showering every day.  I had showered during the late afternoon on Saturday.

It was the principle of the thing.

Dressed, but feeling grungy, I walked out of the bedroom.  We had ten minutes before we had to leave and the kids were still milling around half-dressed.

In retrospect I should have just called it then and there, put on a movie, and taken Charley to church alone.

Instead I got really huffy and took my irritation out on Ryan and the kids and stomped down the stairs.  Stomping down the stairs in a pair of nude patent leather ballet flats is not terribly impressive as a show of annoyance.

At 8:40, with five minutes to go before we had to leave, I walked into the kitchen to find Charley SITTING AT THE TABLE IN A PAIR OF BOXERS CASUALLY DRINKING A CUP OF TEA.

It's amazing how fast kids can move when you use that scary shrieky voice.

We were all in the car and dressed in five minutes' time.

I wonder if I should just start with the shrieky voice next time.

They redeemed themselves with cute sprinkler play that afternoon. 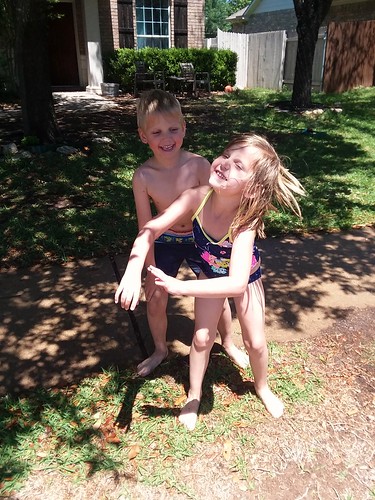 And yes, later in the day I got my shower and took extra time to shave my legs and blow my hair out.  Wanted to look my best for the Pump it Up party I was attending that afternoon.
Posted by Becca at 6:38 AM