I hope I never forget Mary saying in her sweet little voice, "Tomorrow is Easter! The Easter Bunny will come and then we will find eggs! And then we will launch a balloon! And then we will go to Grandma and Grandpa's house for lunch!" Because how many kids spent their long Easter weekend launching weather balloons? The answer is actually kind of a lot, because I invited all the faculty to our first launch on Friday and they all brought their kids. It was SO FUN. I have been preparing for these launches all semester and it was SO GRATIFYING to see that first balloon take off. 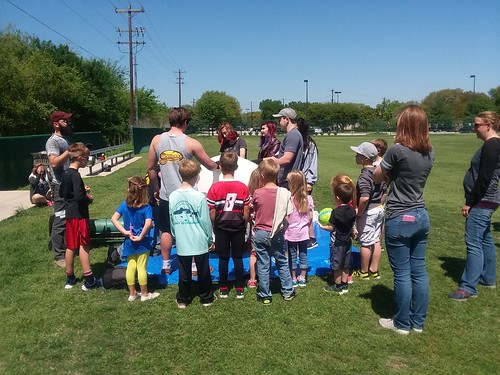 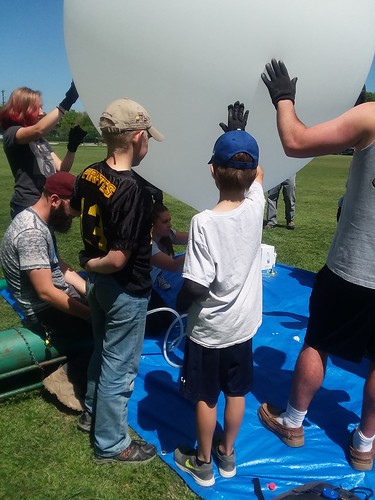 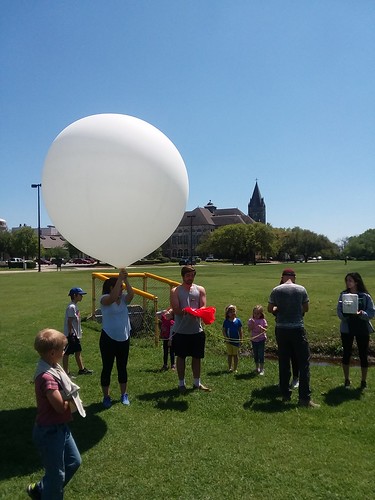 We launched a second balloon the following day. That one was a family effort, with Charley, Wes, and Ryan playing a major role in getting the thing off the ground (Ryan dragged the huge helium tanks outside from the workroom, which is practically HEROIC). It was super windy and the balloon kept rocking around while we inflated it, so we grabbed a bystander who was watching us with his family, threw him a pair of gloves, and asked him to help hold the balloon still. His wife helped spot us as we negotiated the balloon through two stands of crepe myrtles. We finally got the balloon out in the open and ready to launch and took a few pictures with some iconic campus buildings in the background, as you do when you are trying to continue university funding, and then we let it go. 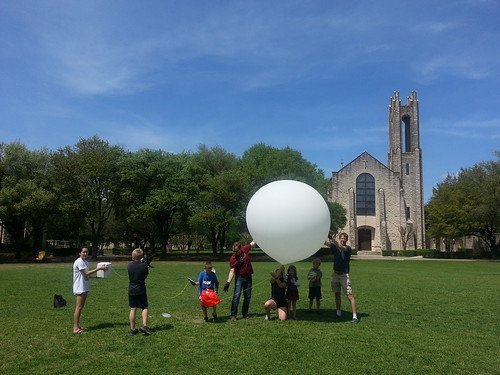 My research assistant told me yesterday that Wes approached her on Saturday and asked quietly "The instrument hit me in the head when the balloon took off. Do you think it's OK?" 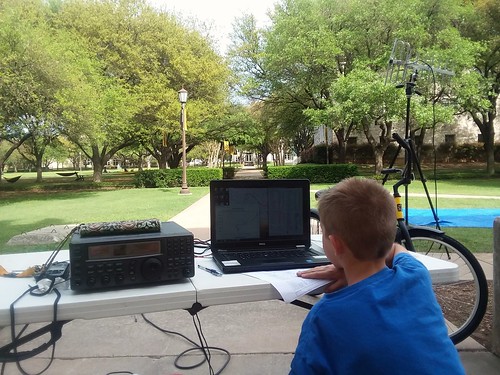 My other research assistant.

Charley watched the balloon for as long as he could see it. 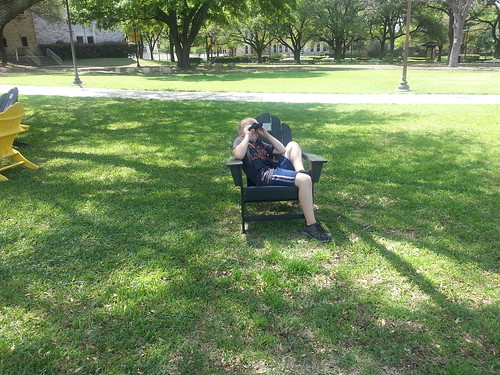 Mary was sad that we didn't launch on Sunday, but she was excited that the Easter Bunny came! There are no pictures of the Easter egg hunt in our house, which was great fun, because two of the children refused to dress themselves and spent the morning languidly eating Cadbury Cream Eggs in their boxer briefs. Not too shabby. Once they finally deigned to put on pants, I did manage to get them outside for the traditional Easter Front Yard Photo Shoot. Hilarity ensued. 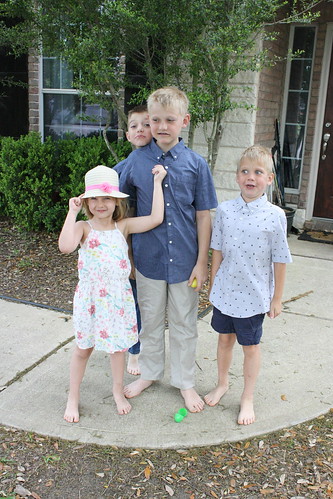 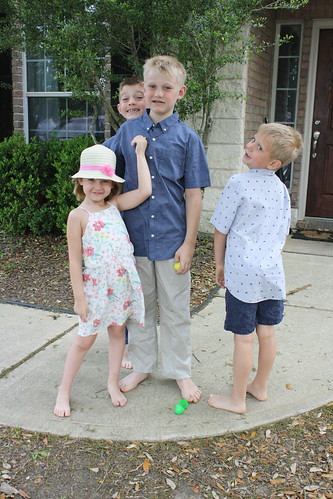 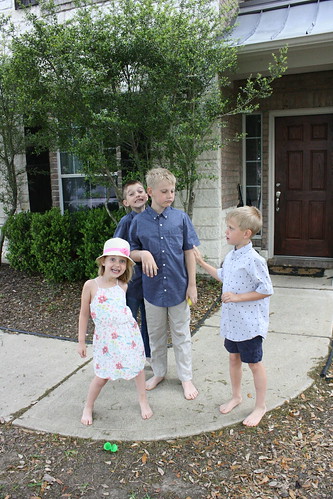 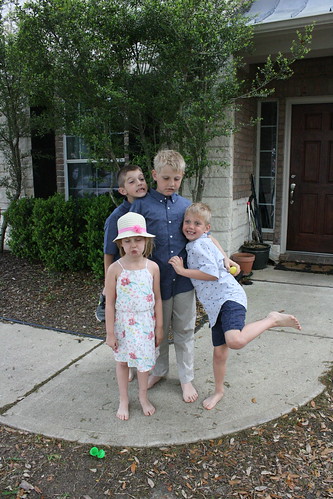 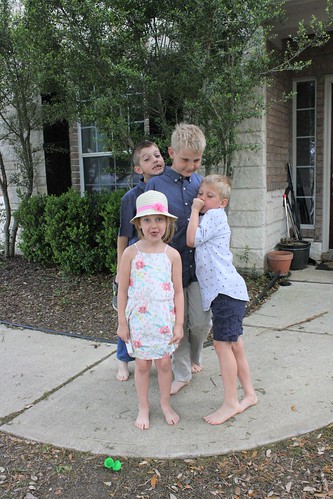 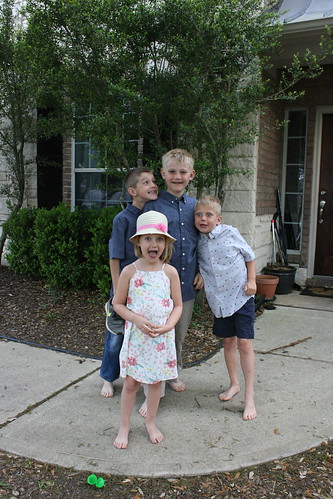 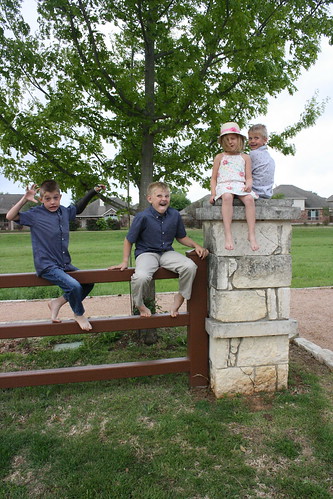 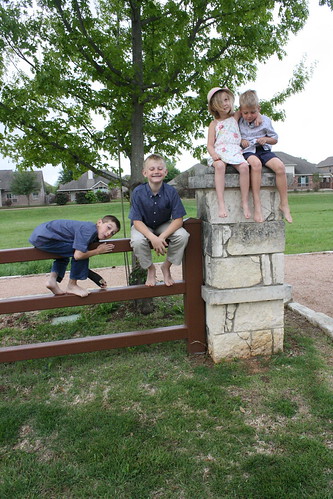 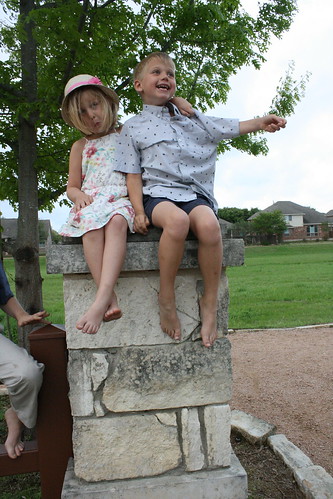 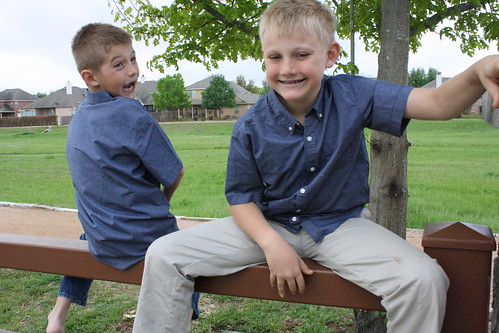 I suppose each of them is smiling and looking normal in at least one of those, so perhaps I can composite them?

We went to church (where the haminess continued--Charley was an acolyte and he and his friend Sara, the co-acolyte, danced down the aisle with the candle lighters, bopped around as they lit the candles, and danced in their seats. Charley smirked and blew out his candle lighter as he crossed the stage)

And then we went to my parents' house for a great brunch. The kids had a second egg hunt. 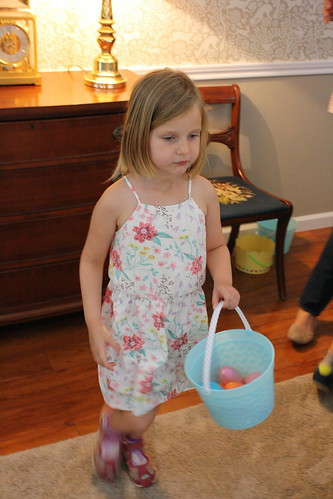 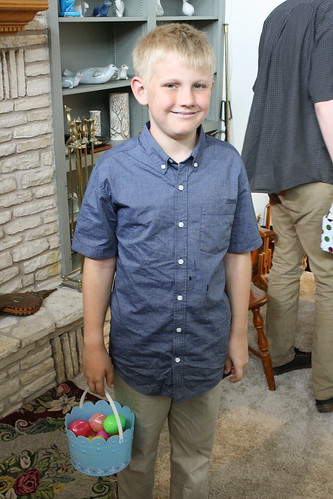 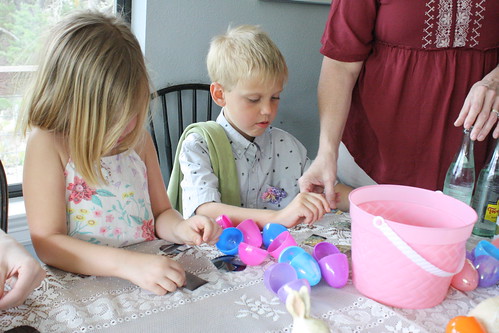 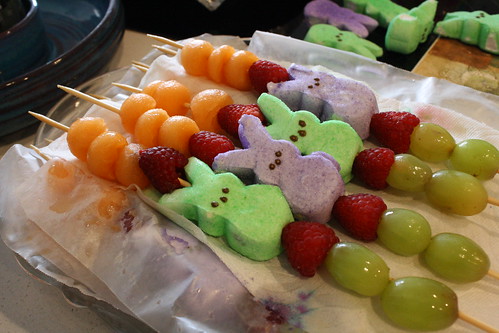 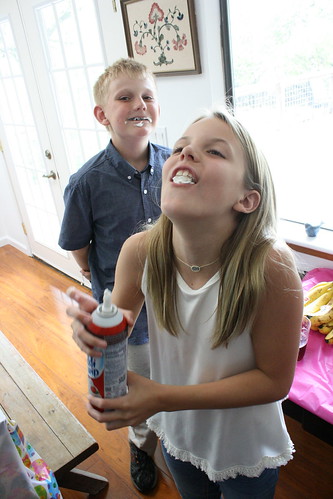 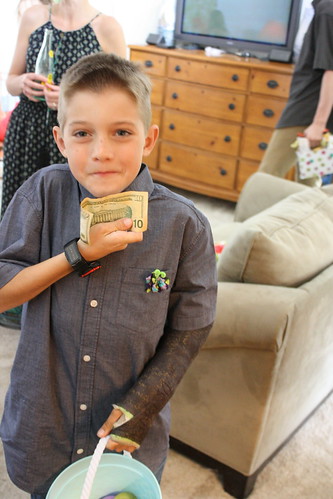 James and my cousin Sam got James's plane stuck in a tree and Sam and Ryan got it out with an extension ladder. My favorite part of this shot is Sam's girlfriend running for safety. 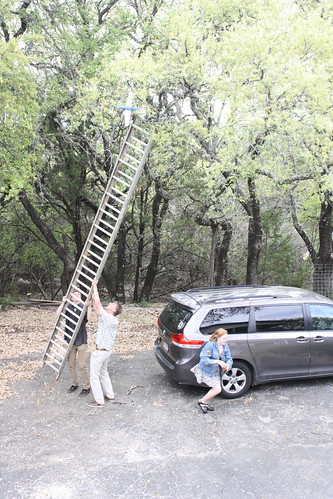 James serenaded us all with his repertoire. 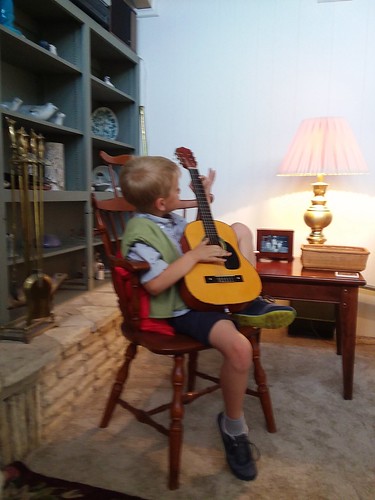 And then on the way home we encountered a traffic jam getting into our neighborhood because apparently we had a good safe patch of bluebonnets for pictures. We are almost never near bluebonnets when everyone is clean and we actually have time, so we took advantage. 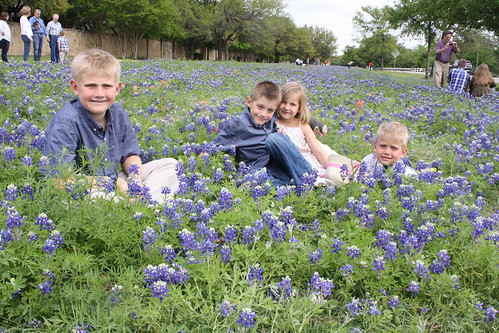 And finally, Wes got his long cast off and was promoted to a short cast, which he got in orange because he is now a fan of the large university where we live now, rather than OUR ALMA MATER. But he can bend his elbow and take showers now, EVERYONE WINS! 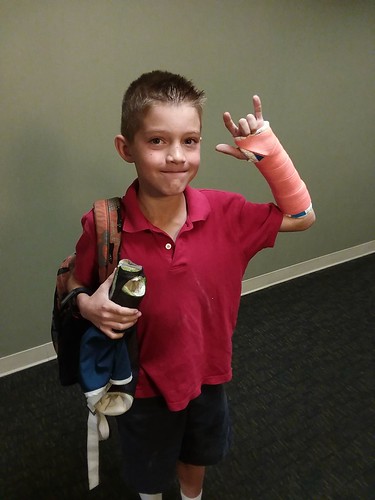 I tried to pick a favorite picture to comment on, but I can't. These are all amazing! Your kids are hilarious!

Put all the pics in the same frame, collage style. You will treasure them forever!

That's some really useful information. You know, it's actually very helpful specifically for me because i need to do my paper and i had no clue where to find any reliable information on this topic! Thanks for the help :D