Things we did not do this week

Among things I never expected to do as a parent, encouraging my nine year old to lie by omission to his orthopedist regarding our spring break activities must rank among the top ten.

It started innocently enough. Wes had a checkup on Monday, during which he asked the ortho straight out if he could go hiking. I blame myself for never teaching Wes about plausible deniability. The doctor said no, because as he explained, if he fell, he could break the OTHER arm, and THEN WHERE WOULD WE BE. He looked at me apologetically and told me to keep him calm and inside for the next eleven weeks. First rule of getting people to do things is not asking them to do impossible things.

We went straight from his checkup at the doctor's office to the movies, for a sensible screening of A Wrinkle In Time. I had packed a picnic to eat beforehand, which we ate in a park. The other kids played while Wes laid on a hammock. I did not let him run! Or climb! Or slide! Because I am a Rule Follower. 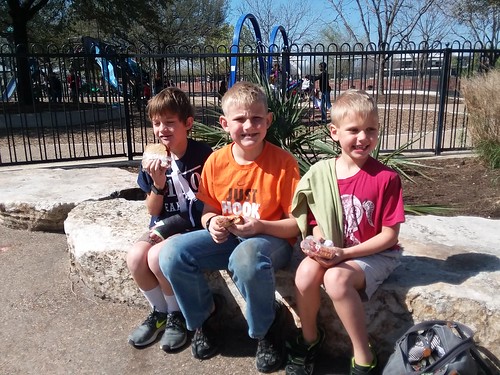 By midweek all of that had gone out the window and we were climbing the sheer face of the biggest hunk of granite in Texas. 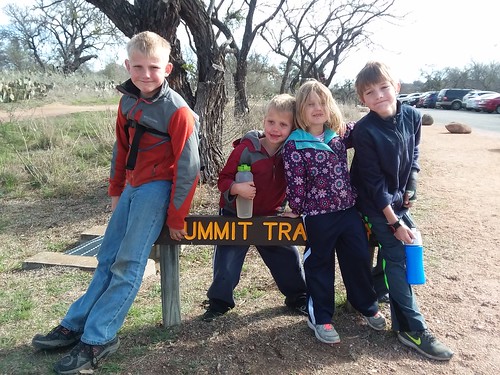 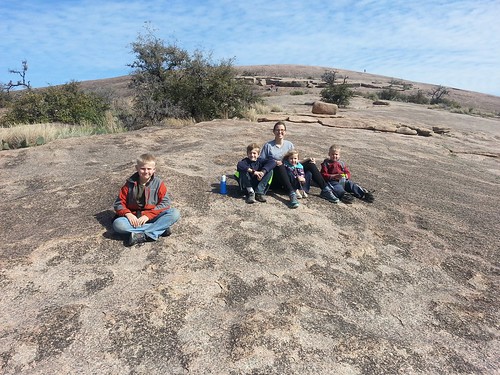 That little spec on the horizon, just to the right of the middle? Is a person. 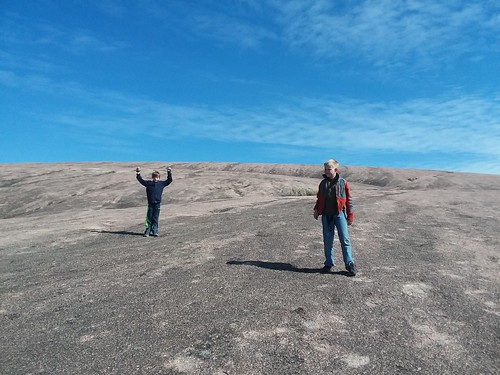 I was careful to not post any of these to social media until we were safely back at the bottom, lest we tempt fate or concern my mother too much. 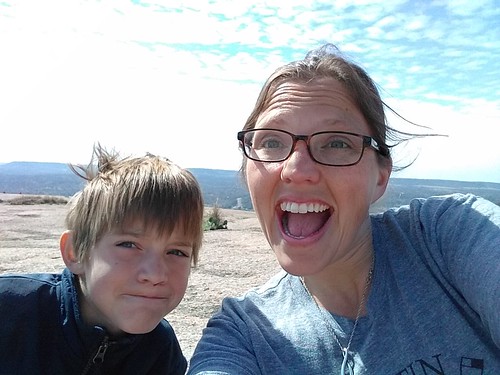 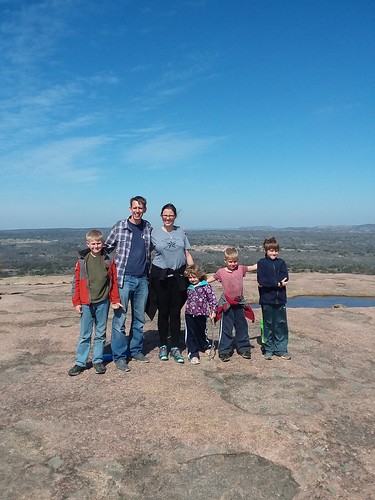 It was fun and everyone came home with their arms in more or less the same state of wholeness/brokenness with which they arrived, so WIN!

The night before the super secret hike, we camped in the park. 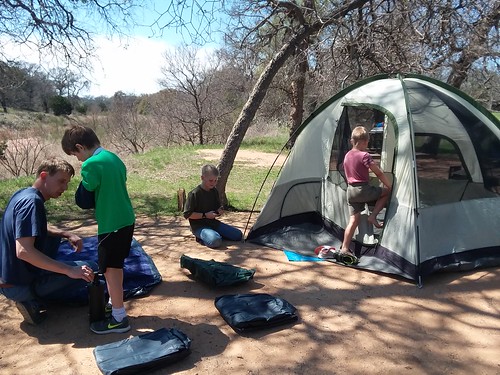 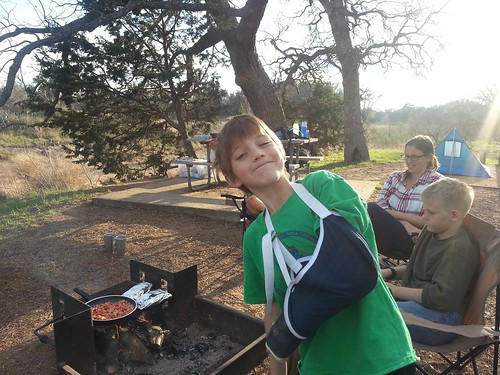 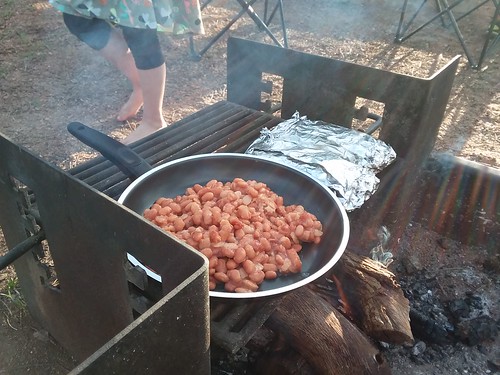 We cooked chicken fajitas and beans on the fire for dinner, followed by s'mores for dessert. In the morning we made scrambled eggs and bacon. We tried cooking bacon in a foil packet but it ignited and the grease made a HUGE flame. Fortunately, we only lost a few pieces of experimental bacon. Ryan and I thought this was hysterical because we had reached the punchy part of the outing.

We made a lot of fires because the overnight low was IN THE THIRTIES. My clothes smelled amazing. I accidentally put on the jeans I was wearing at the camp out yesterday and wondered for a moment if the house was burning down around me. 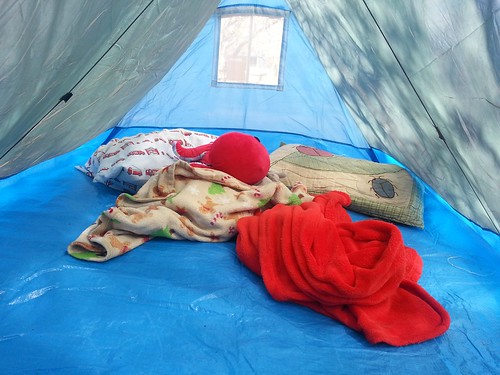 This is Charley and Wes's tent (I swear they had sleeping bags at bedtime). Wes woke up disoriented at two o'clock in the morning and punched Charley until he woke up. In Wes's defense, Charley is a snuggler.

Everyone else slept in here. It was quite cozy! Except for Ryan, who had forgotten his sleeping bag and slept curled into his parka, wrapped in two throw blankets I'd grabbed off the couch on the way out the door. 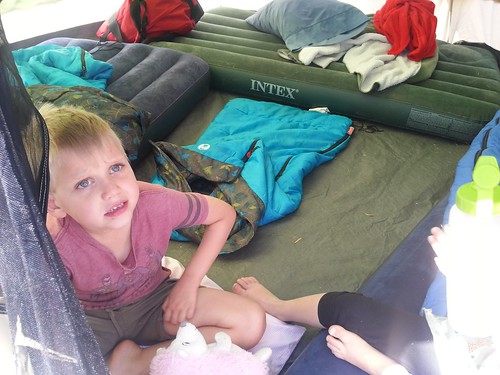 After all that sneaky hiking, shivering, and cooking, we headed for home. The kids barely made it out of the park. 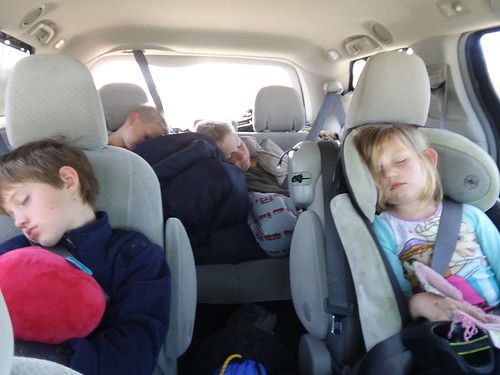 Charley gave this note to a ranger on our way out and after we got home someone sent me a link--the ranger had posted it on the park's Facebook page with a comment about how it had made their day! 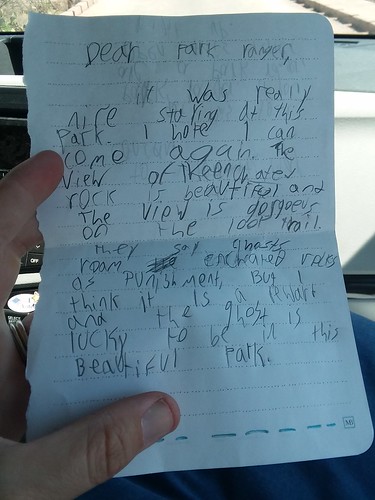 I struggled Thursday morning to come up with an activity that was appropriate for all ages, that was inexpensive, that did not involve water, and that could be done with one hand, and then it came to me. 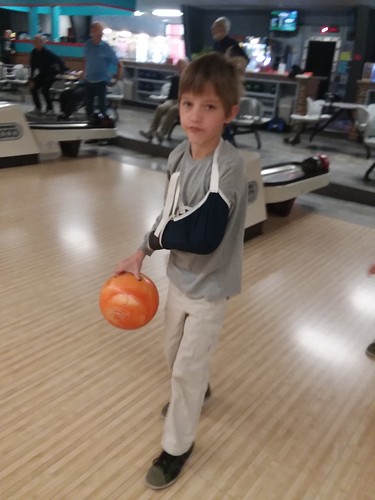 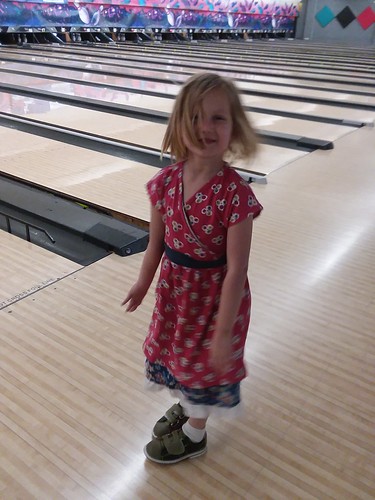 And then we met friends in our little town for ice cream on the plaza, which morphed into ordering pizza and staying for a free concert by a Bluegrass band. Mary waited patiently in the free face paint line for nearly thirty minutes and YOU GUYS. She kept it on for two days. 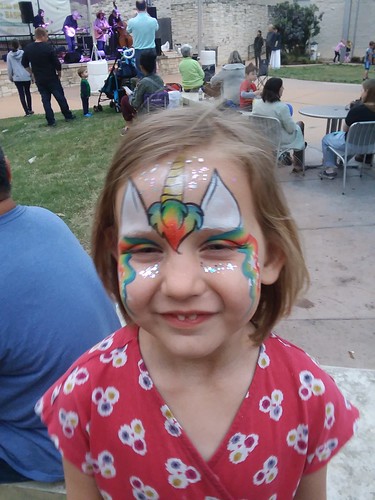 I knew I was in for a treat when Charley was in the chair and I saw the artist look something up on her phone. 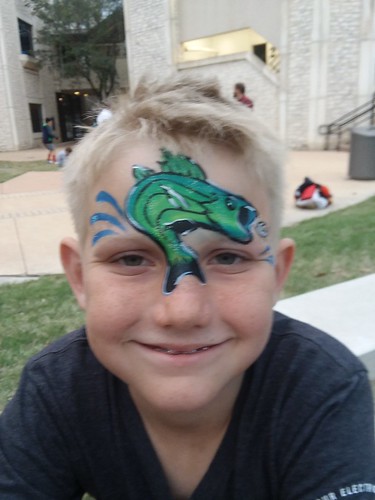 And then finally, on Friday I took them to the zoo with some friends. 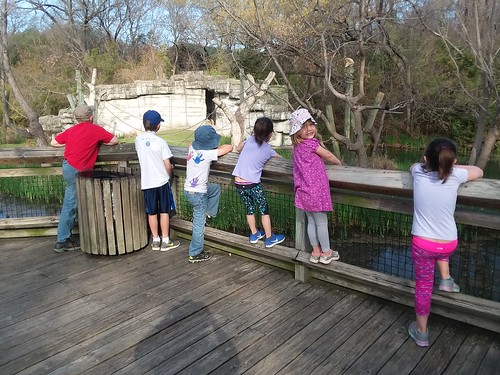 All that magical family togetherness special time took its toll and by late morning on Saturday I was SUPER HAPPY to jump in my car and go help my friend Heather unpack her new house ALONE. We worked for a pleasant five hours and then I went home and got ready because GOOD NEWS, our babysitter was free and we were GOING OUT! Ryan and I went to a bar downtown that has really good pretzels and beer cheese and nachos and SERENDIPITOUSLY stumbled onto a St. Patty's day celebration with themed beers and appetizers. Just when I thought it couldn't get any better, FIREMEN CAME OUT WITH BAGPIPES AND DRUMS. They were on a pub crawl, SO WE FOLLOWED THEM. It was THE FUNNEST. And also, by the time I got home I was ready to participate in family life again. It was just what I needed. Cheese, pretzels, and bagpipes. I had no idea. Spring break. It was a good one.
Posted by Becca at 8:19 PM

The letter to the park ranger - awesome!
If I'd been the park ranger to see this, I'd be over the moon with delight.
Yes, those ghosts are lucky ...
So are we, readers and anonymous lurkers (mostly) of your blog.

I LOVE this because Becca! We have reached a major parent milestone. It is no longer spring "break." It's FUN to spend a WEEK HOME with our kids! I really feel like this one snuck up on me, and I am glad to see you're there, too!!