It was going to be epic

Ryan and I were enjoying a hamburger lunch anniversary celebration yesterday early afternoon when I looked down to check my phone and saw three missed calls from the school in a span of twenty minutes followed by a text from the school nurse's personal phone. "Wes has broken his arm. Call me ASAP." At the same moment I was reading that, Ryan got a call from my dad, who is our emergency contact. He said "I'm in the car, do you need me to come?" Ten communications with three different people in twenty minutes scared the shit out of both of us and we were in the car in less than thirty seconds (sad news about all the truffle fries we had to leave behind). Fortunately we were able to get to the school within five minutes (someone cut us off on the way there. I honked while Ryan handled the obscene hand gestures) and they ushered us back as soon as we walked in, without even scanning our licenses to make sure we hadn't committed any felonies in the three days since our last visit to the school.

Wes was crouched on a chair, his entire body wrapped around a pile of blankets and a red octopus stuffed animal that was supporting his wrist and several ice packs. He was MOANING. It was a HORRIBLE moment. Not quite as horrible as when the nurse lifted up the ice packs to show me that Wes's forearm was SNAPPED in HALF, bent at a crazy unnatural angle, swollen and bruised. He couldn't walk, he couldn't stand up. He screamed as we transferred him into a wheelchair and rolled him out to the car. All of our amazing office staff and administrator ladies following behind worrying about him, giving us shoulder squeezes, telling him to feel better.

While Ryan buckled Wes in (not a small feat), the nurse calmly told me that if his fingers turned purple or became cold to the touch that we should pull over and call an ambulance.

Ryan drove eighty down the interstate on the way to the children's hospital while I attempted feebly to distract him with cat videos and Harry Potter videos and this incredibly raunchy YouTube show that his friends are allowed to watch but he is not (eventually we both got uncomfortable and he asked me to change it, HA!). Every time we went over a bump he started crying louder.

I called my mom and said "Please get the other kids. Please bring an overnight bag, just in case. I have to go." So that was probably fun for her.

When I rolled him into the emergency room and was checking him in they asked if they could get anything for him and I said that he needed some pain medication. She started to say "We can't do that out here..." as she pulled up the blanket and ice pack covering Wes's arm and then stopped abruptly, scooped up her walkie talkie and announced "WE HAVE A DEFORMITY!" Immediately, the Deformity Action Team arrived. One ordered intranasal narcotics for him, one splinted his arm, one hooked up his monitors, one found him something interesting on TV, one got him an ice pack. They put numbing meds over the veins in his good arm to prep him for an IV, they cooed and fussed over him and tucked his blankets in tight, complimented his Octopus, asked him about the cool trick he was trying to do on the monkey bars. Everyone talked directly to him and called him "Wes". I want to marry all of them.

(When I asked him what he did on the monkey bars right before this happened he said simply "It was going to be epic." Children's ER nurses and doctors have Strong Feelings about monkey bars.)

When the pain meds hadn't kicked in fifteen minutes later (and all the ice, Curious George, and singing lullabies also didn't help), they gave him an IV and then gave him morphine. He was a one-man opioid epidemic. The pain started to improve slightly so they rolled him over to xray in his bed and gently tucked the plates under him without moving him, then angling the camera every which way to get a good image.

I wasn't going to look but then curiosity got the best of me. Holy shit. 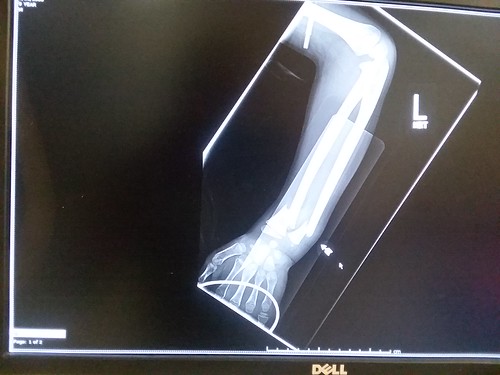 They took us to a new room that quickly filled with people. His sedation nurse, his orthopedic PA, his orthopedic doctor, two more regular nurses, the ER doctor. They all suited up in lead vests and they rolled a big portable xray machine in. They explained that they were going to sedate him and try to put the bone back together, then put the cast on him. While they were talking, the Morphine finally kicked all the way in and Wes fell asleep. Then they sedated him officially and sent us to the waiting room. Were out there thirty minutes and when they called us back to his room the orthopedic PA was sweaty and flushed. Apparently there was a struggle. Wes was resting with a new green cast on his arm. They let him have a PowerAide then cut a crack down the side of the cast to allow for swelling and taped everything in.
When they took more xrays, Wes, who was still super goofy from the meds, smiled and posed for every "picture". Even when his face was behind the xray plate.

He was ready to go much faster than we expected, they gave him this giant blue cone of shame to hold his arm in the upright position for the next three days, and sent us home. 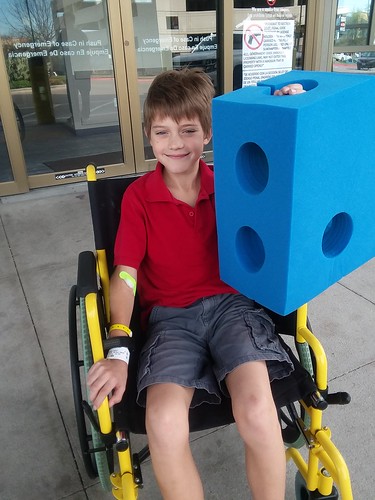 So happy to be going home! So high!

We arrived home to three curious siblings and a homemade meal of mac and cheese and ham. 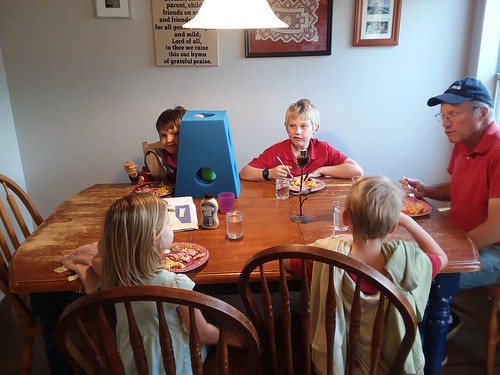 Wes ate seconds, despite having had a hamburger, fries, and a chocolate milkshake in the car on the way home from the ER. I also had a milkshake and so did Ryan. 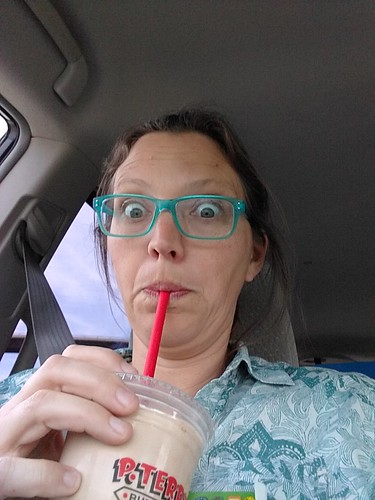 Because my kid broke his arm in half.

We gave him a very careful bubble bath and then got everyone in bed before collapsing on the couch with ALLS the WINES.

I realized this morning that I had a milkshake and a handful of Cadbury mini eggs, plus two glasses of wine FOR DINNER. OOPS.

Wes came and got in bed with us this morning and I asked him if he remembered falling asleep in the emergency room. He said "I fell asleep and then I went through this portal of triangles and they kept slamming me against the concrete, but it didn't hurt. I ran a race. They hung a bunch of things on my arm, but it didn't hurt. And then I went through the portal of triangles again and then I woke up and had a cast." Which sounds, AMAZING. They DID say they were going to have to hang things off his hand and pull and push him to get the bones back in place.

Apparently the sedative did not give him amnesia like they said it might, but instead he turned the procedure into some kind of hallucinatory experience. Bitchin!

All the sibs signed his cast before school this morning. 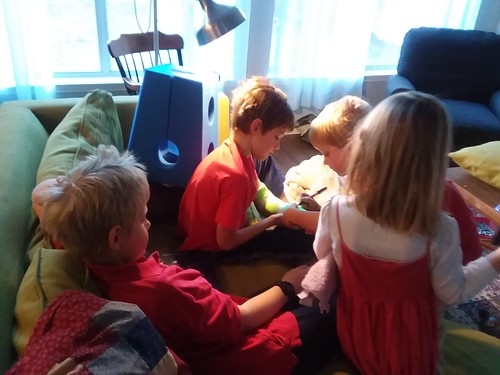 And then my mom arrived with another milkshake and a trunkload of groceries so I could go get ready for class. I really, really reallyreallyreallyreally want to be home right now, but Things are Happening at work and I will get into THAT story someday, maybe, probably. And plus also, Wes ALSO WENT TO THE EMERGENCY ROOM ON SUNDAY because he fell out of a chair and split his lip!! Not my best week ever!!!!!!
Posted by Becca at 8:58 AM

OMG! What a terrible day, but also you’re writing is phenomenal. I hope Wes stays out of the ER for at least a few weeks

Oh, wow, I hope he heals up just as quickly as possible. Take care of yourself.