Stream of consiousness with your coffee

Not much to report here. It was kind of a mixed weekend. Sometimes the kids were fighty and annoying, sometimes they were wonderful. Dinner last night was a mix of irritability and other low-level annoyances that just made the whole thing feel like a chore. When James started hacking again I sent him off to the nebulizer and happily set to the task of cleaning up and sending everyone else to prepare for bed even though it was only 5:45. A wine-fueled practice session with Charley (he has to learn "Do Lord" in the next eight days to perform at the Children's Sabbath. It is going moderately well) while Ryan put everyone else to bed and we were still done by 7:15. Sometimes you just need to call it a day.

The other day our sitter texted to ask if she could put James's shoes in the washer. I have a weird phobia about washing shoes in the washing machine, so I asked politely if something disgusting had happened to them. She replied that they stunk so bad she had to drive with the windows open, but then considerately qualified that with "But I'm pregnant, so things smell extra strong to me right now." I asked her just to put them on the back porch for now and said I would figure it out when I got home. I was a bit surprised since if anyone's shoes smell bad enough to offend someone it's Wes's. I've never noticed James's shoes before. But then yesterday he took them off at church and YUP. James's shoes STINK. I made a mental note to find a time to get him some new ones, somewhere in the neighborhood of next weekend, but then he wore them while he played in a pond all afternoon and this morning they look like this. 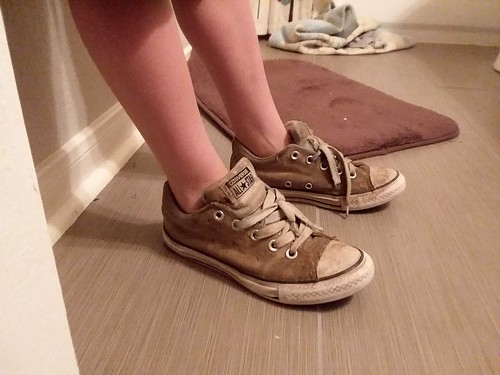 For the record those are white Converse All Stars. New shoe purchasing timeline has been accelerated.

In better-smelling news, I has an Ordinary Time itch and threw together a King Cake and some jamblaya on Saturday night. Then some friends came over to eat it with us and brought with them a craft beer pairing to go with it. A great night with only minimal kid drama (I am so glad I and the friends I hang out with are past the stage where we pretend we don't use the TV babysitter! I set up the TV at the first part of Moana and said to the kids "When you are done eating, go hit play!" They didn't even both us in the dining room. Beautiful.) 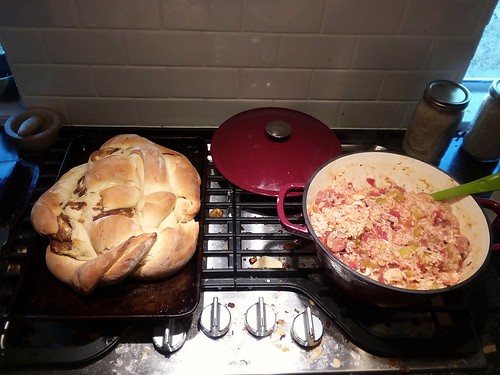 My house smelled SO GOOD, you guys. And Ryan got the baby in the King Cake leftovers last night. I told him that he will need to make the next King Cake sometime before THIS Ash Wednesday, please and thank you.

We went over to a friend's house on Saturday morning for a Girl Scout cookie recipe open house, which was clever and fun and induced me to buy even more crack than I was planning on originally. Her house backs up to a little pond, and, like the golden retrievers they are, the kids could not WAIT to bust out of her fence and go check it out. Naturally this resulted in Charley reappearing twenty minutes later with a dead fish. See what I mean? Golden retrievers.

And finally, we have one kid who is just having a tough time with things right now. He just reread the part in Wonder when Jack Will says hurtful things about Auggie behind his back, and he cried and cried. He woke up twice on Friday crying about it and didn't go to sleep until he tucked all his stuffed animals in with him. He has been super irritable with the other kids and has been lashing out with his nails. We call him the Angry Cat. I think school has just gotten overwhelming for this sweet kid and we are trying to work with his teacher and the administrator and a couple of other helpers (therapists). Yesterday this kid wanted some Thin Mints and I was about to give him some, but then I said instead "Why don't we take these Thin Mints and get on our bikes and go have a picnic!" The kid was excited and so was I--he hasn't wanted to ride his bike or play outside in weeks! So we got on our bikes and rode a couple of miles away to a park. It was a beautiful day and the sight of his knobby knees pedaling his bike in front of me was so joyful. We ate our cookies on a picnic bench and then jumped off the swings a few times. We took a new route home and went to an open house just for fun. He picked out his bedroom and did some twirls in the middle of the floor. He fell asleep early last night and woke up feeling refreshed instead of exhausted for the first time in a while. So glad for this little break for him. I don't know why things have to be so hard for kids!
Posted by Becca at 6:58 AM