Let's see how the last forty-eight hours have gone in my house, K?

I have cajoled by force a sobbing child out of bed to get ready for school. Fed him yogurt in the manner of Tina Fey trying to get Amy Pohler to take a prenatal vitamin in Baby Mama. Used every ounce of self control I have to not ALSO lose my mind. Fortunately the yogurt helped enough that he was able to put on his coat and shoes without further histrionics.

I have performed a detailed inspection of a child's pants for poisonous insects after the inside of James's thighs became red and inflamed and incredibly painful to the touch last night while we were eating dinner.  I dosed him up with Benadryl and had him lie on the couch quietly because I sort of remembered some advice from a Girl Scout wilderness first aid class about not running around because it pumps the venom through your body faster.  It also gave me access to the best spotlight in the house so I could take pictures of the rash and text it to friends like WTF is this???  After a bit of back and forth with my friend Rosa we decided Benadryl plus ice plus a shrug of the shoulders was the standard of care in this situation.  We still have no idea what the heck happened but with 10 mLs of Benadryl in his system he slept like a ROCK.

I have administered three albuterol breathing treatments to two different children, morning and night, due to COMPLETELY OUT OF CONTROL coughing during which their faces turn red and they become short of breath.  For those of you following along at home, this is entering WEEK FIVE for Charley and week two for James.  I emailed their pediatrician yesterday to describe the problem and ask if they should come in and she said, basically, DUH, so I took them in this morning.  Charley gets a suite of decongestants at night and James got a dose of steroids for wheezing and instructions to use the nebulizer every four hours.  The last time James took steroids he hulked out and sank his teeth into the post that holds up the roof of our front porch.  I should probably email his teacher.  Nah. 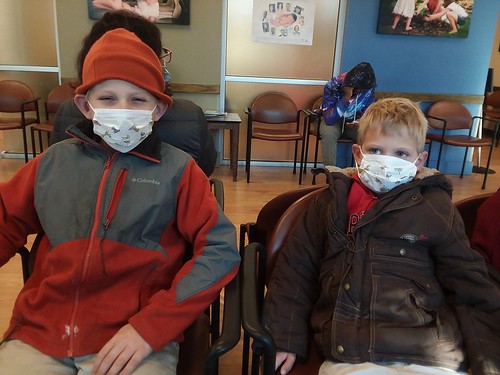 I was a bit apprehensive taking them to the pediatrician during flu season. Many sharp "DON'T TOUCH ANYTHING" commands were delivered and I took my own pen out of my purse to sign the receipt rather than using theirs. Theirs which are labeled and that even the staff won't touch. Yeesh.

I took Charley to Goodwill after their doctor's appointment this morning so he could buy a pair of pants that actually have a button.  But only after spending a few minutes considering whether he could just wear the buttonless pants at school as long as he didn't tuck in his shirt before realizing that without the button the ZIPPER would also not work, so JUST NO.  It's not often you can save your child from humiliation for five dollars. I'll take it.

I dosed a child with Miralax after his abdomen became distended such that he looked as if he was carrying our first grandchild. After some discussion, it was revealed that the child was having issues in the bathroom. These issues were described in QUITE GRAPHIC TERMS. The next day I had a lengthy conversation about the result of that Miralax while standing in the lobby of Mary's school. The tummy had recovered substantially. It's a girl! Not really.

And finally, here's something new I'm learning about that might surprise you:  Girl hair.  Specifically, why does Mary wake up looking like she was doing field work on Mount Washington every morning? 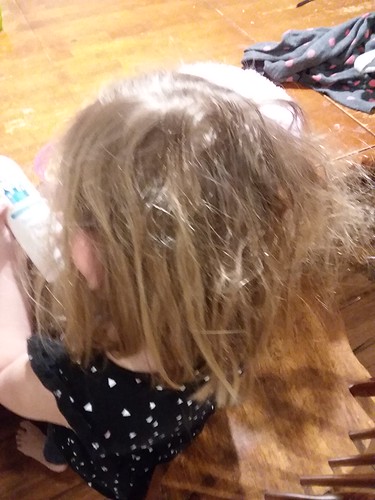 Twenty minutes and half a bottle of detangler later, we had made some important progress but both of us were sweating and no longer on speaking terms. 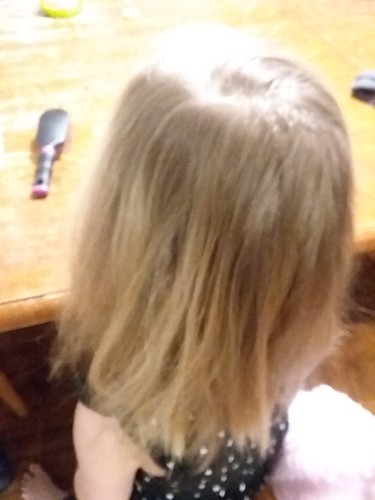 Look! It's a human child who is loved and cared for by a responsible adult! 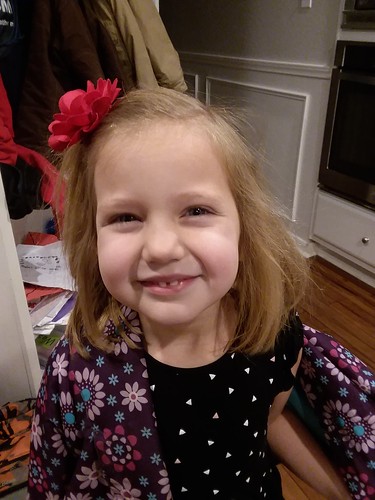 I am hoping for a normal evening tonight without coughing, spiders, tantrums, knots, or any question marks regarding whether or not to go to urgent care.
Posted by Becca at 9:53 AM

Oh man. This is a week that DEMANDS tequila! I’m so sorry.
I am no help in toxic kid land but what I can offer is hair advice. Our hair bottles got MUCH easier once I 1) got a wet brush and 2) started using normal, non-kid shampoo AND conditioner. FWIW.

Whoa! Sending alcohol and ALL the chocolate

I am dying. Dorothy's hair looks exactly like that. I have a $2 bottle of Suave leave-in kid conditioner that I slop on her head after bath, and she combs her own hair in the morning because I don't care. She also won't let me comb it after bath. So, eff it.

My daughter has similar-looking hair in the mornings. I think it is because her hair is so thin. What I do is comb after a bath (and washing and conditioning with regular shampoo and conditioner) and then braid it into a loose braid. It really helps with the tangles. Because I am sometimes a nice mom, if it is cold I dry it first haha. Even on nights she doesn't take a bath I still braid it to avoid the tangles.