The title is that emoticon with the huge eyeballs

Not sure how to best capture a week of extremely photo-heavy kind of days in one blog post, but since I've been studiously avoiding my computer (since when I am on my computer I feel like I should be working on something that I have been avoiding, making "studiously" a funny choice of adverb), this is where we are. We just got back from a nice trip to see Ryan's parents in Adjacent Large Metropolitan Area to the North where we ate great food, enjoyed great company, and went to see Coco. This is the first short road trip we have taken where we have deigned to use the mobile DVD player we bought for our huge summer road trip and I am here to tell you that I HAVE SEEN THE LIGHT. As I said to Ryan, "If you bring that DVD player I will go ANYWHERE YOU WANT." I had no idea you could go on a road trip without almost surrendering a child at the fire station. Life changing. I even had time to finish the Mobius Strip cowl I started several weeks ago. 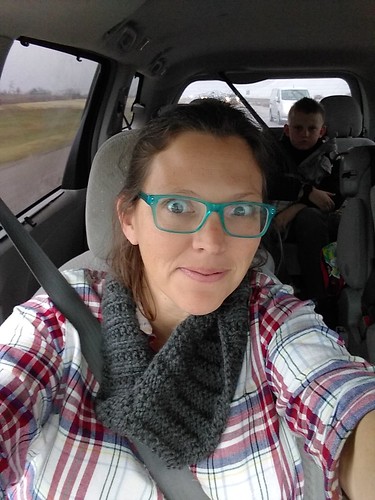 Before that there were MANY OTHER THINGS to tell you about.

Friday we all headed downtown to the Capitol for Tuba Christmas, a yearly celebration of tubas and seasonal music that takes place outside. Having things outside in Texas in December is generally not a problem, but the forecast for Friday called for a strong cold front to pass through sometime during the concert. Not only would this front bring a twenty degree drop in temperature, it would also bring stinging wind and aggressive drizzle. BAH! I said. We will just bring our jackets. We will not MELT. This is totally fine.

It was seventy degrees when we got out of the car and walked over. It was in the lower fifties by the time Ryan returned with hot chocolate for everyone. It was FORTY SEVEN degrees and raining by the time the concert started. 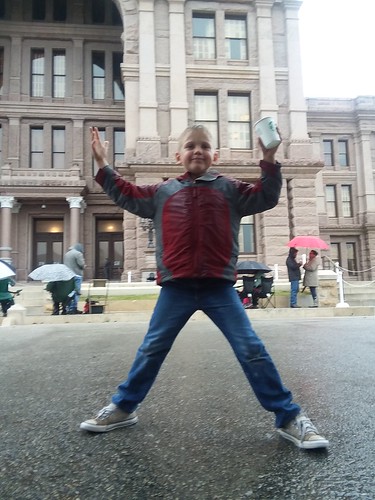 All I want for Christmas is walking pneumonia.

When it was time for the music to start someone loaned us an umbrella and I managed to cram myself and three kids underneath it using a concrete retaining wall as a wind break. 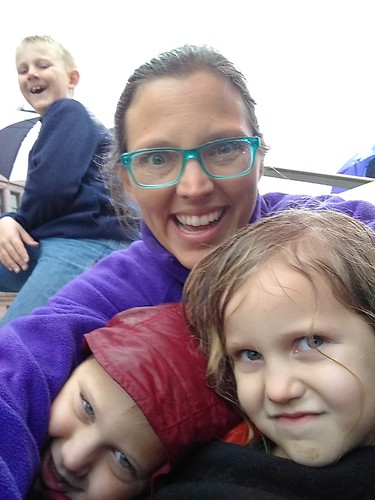 The music was beautiful as always, I do love Tuba Christmas, but after about the ninth song we gave up and headed to the car. Changing into dry clothes was LIFE AFFIRMING.

Saturday we went to Wigilia, the Polish celebration of Christmas Eve, at my aunt and uncle's house.

Sadly, I only took one picture, and it's this one of my little matching Matryoshka dolls at the end of the table. 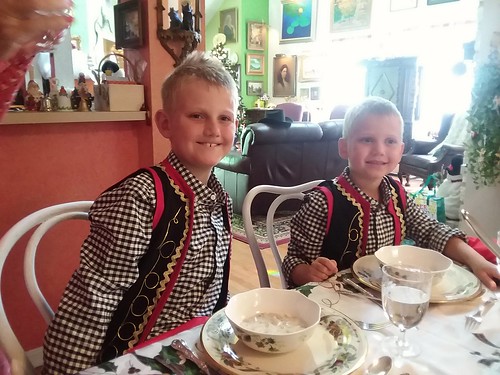 But it was a great celebration with friends, wine, food, and lots and lots of delicious homemade pierogis. They had to make more twice because James and Wes kept polishing off the last of the platter.

And that night, Former Nanny/Current Honorary Aunt Nicki came over! So good to catch up and remark about the tallness of the children over sugar cookies and the world's spiciest pizza (Wes dared James to eat a bite of it without taking a drink of milk for one minute. He made it.). I really miss seeing her almost daily. I always want to tell her about how much she has helped our family in ways big and small (mostly big) but instead I just hug her an awkwardly long time and threaten to keep her from flying back to her (enviably cool life in) New York. 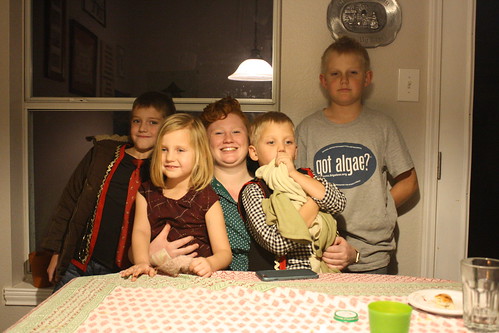 Of course this meant that the next day was Christmas Eve, during which we spent approximately eight hours at church. Ryan wanted to go to the last regular Sunday morning Advent service (nerd) (like me), then we helped set up for the children's service, then we went to Starbucks because obviously, and then we had to be back at church to put on our costumes and get ready for the children's service.

Flanders Family Christmas is a go... 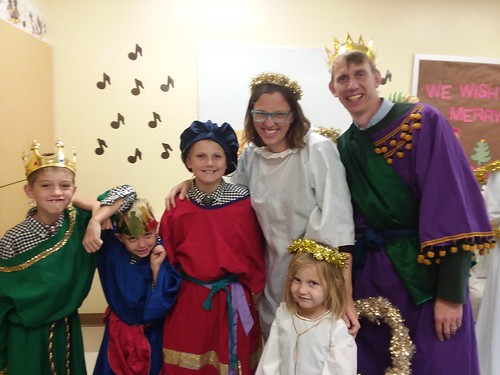 In addition to helping kids participate in the spontaneous pageant, we also handed out bells and halos and crowns and candles. Wes played the prelude, Charley played the offeratory. We didn't sit down until the very end. I say this not to brag, but to document the level of sheer insanity that was this Christmas Eve. It was fun and exhausting and wonderful. Not peaceful. No no no. 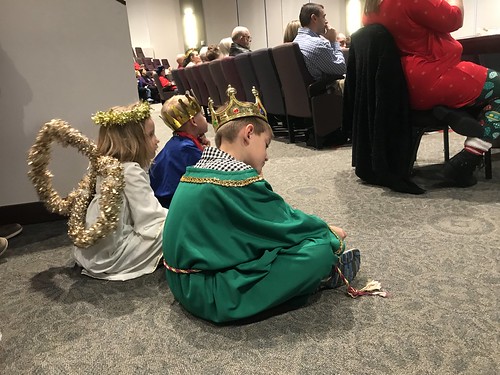 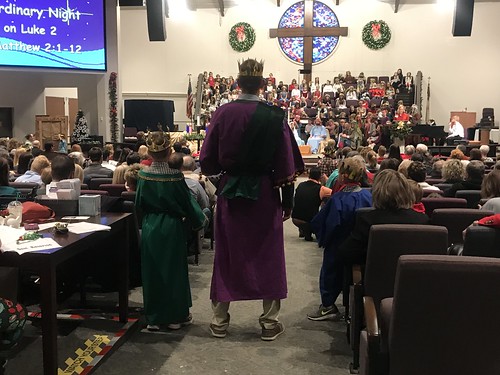 This part always makes me verklempt. Defiantly lighting candles in the dark. The way the room goes from dark to warm and cozy and bright. It was especially poignant this year. (And not just because next year Charley won't technically be in Children's Ministry any longer because he will be a Youth). 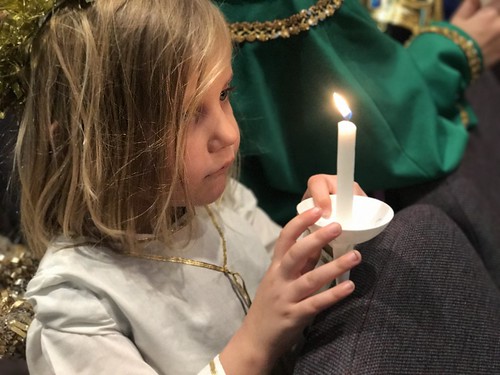 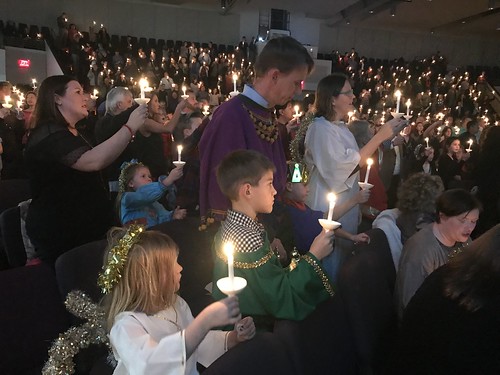 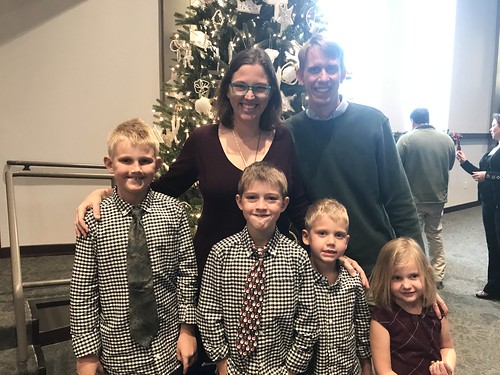 When we finally got home, everyone was WRECKED. We turned on the original 1951 classic "Scrooge" because we are a family of nerds, plugged in the tree, and everyone relaxed while Ryan and I made a tamale dinner, two pans of cinnamon rolls, brownies with peppermint icing, and two breakfast stratas for the next morning.

When I looked over at the kids I saw the three boys all cuddled up together on one side of the couch. Mary walked over and Wes said "You can only be on this couch if you want to snuggle." Mary burrowed in and they covered her with the quilt and watched the whole movie like that. These kids, you guys. I love them. 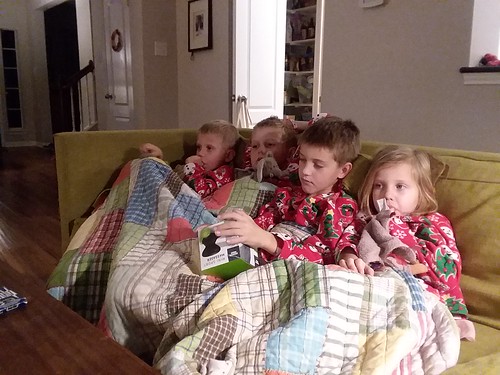 To continue the theme of Surreally Good Behavior, they did not wake us up until SEVEN THIRTY Christmas morning. In fact, Ryan and I woke up naturally and wondered aloud if there was some kind of problem. Ryan sneaked out of our bedroom and found the three boys PLAYING CHESS in the play room. He ran back to our room to report the news. Several minutes later, we heard Mary's door open and only then did all of them come into our room with their stockings. This was--not what I was expecting. 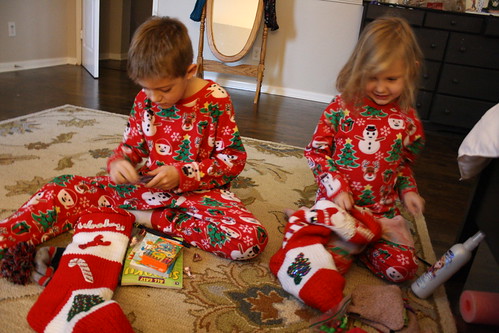 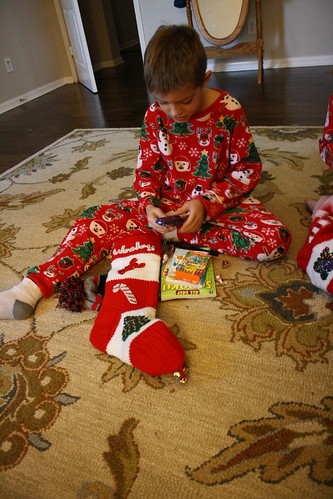 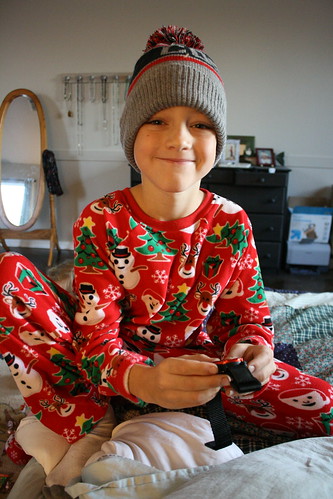 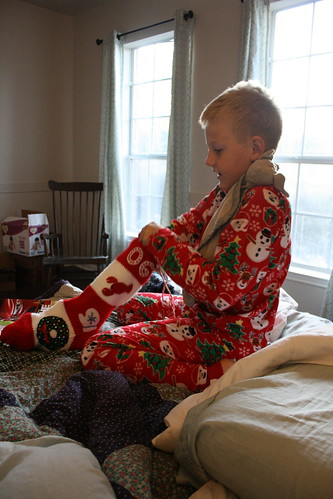 After all that snuggling and considerate behavior, even I found the pre-coffee four-way harmonica concert charming. 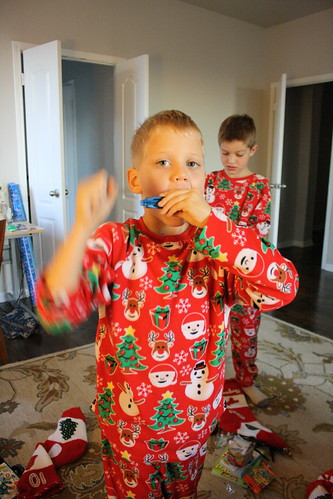 They led the way downstairs in a thundering hoarde. 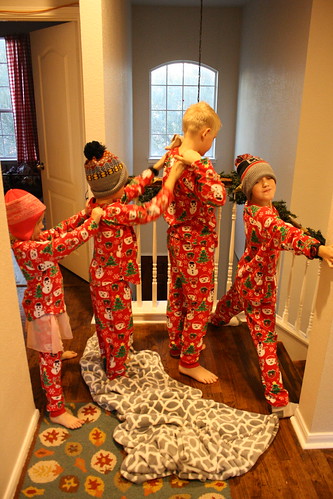 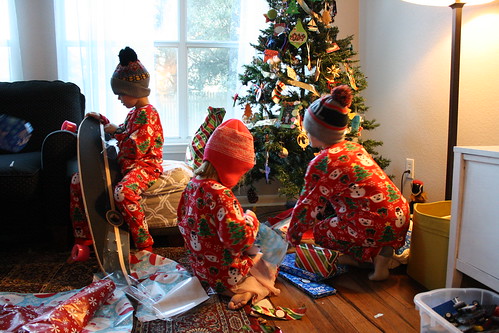 Doesn't the tree look pretty here? I took it down already. Because I am a heartless monster who has two classes starting in two weeks and a conference to prepare for and I do not need to be looking at that thing on Valentine's (Memorial?) Day. 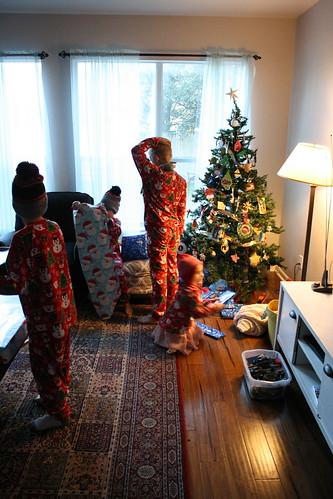 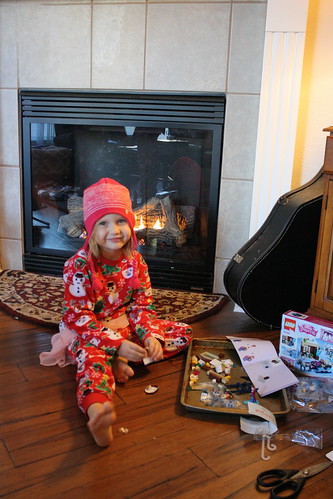 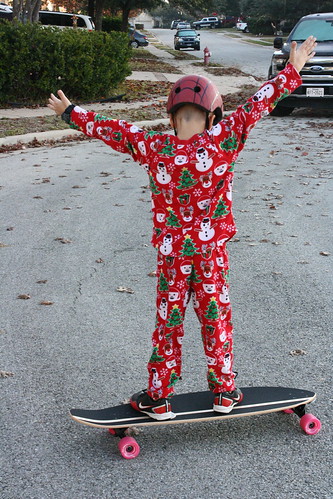 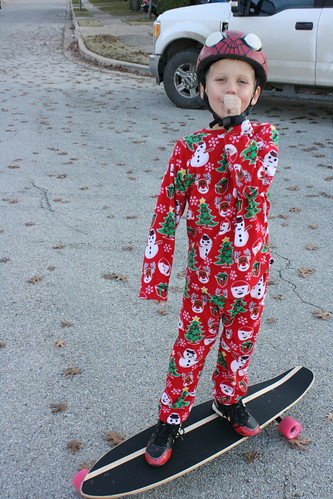 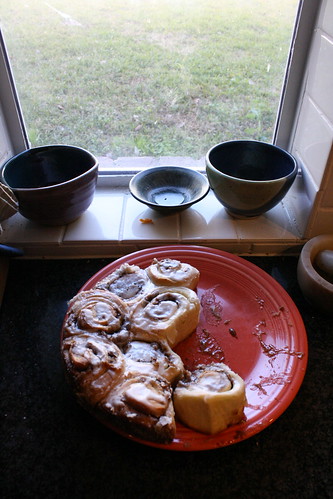 The neighbors came out with new bikes and we played and drank champagne and shivered in our PJs and coats. My parents came over and we drank more champagne and had a second Christmas (My mom gave me an Instant Pot, which I am EXTREMELY excited about, so hit me with all your vegetarian recipes!)

And then we jumped in the car to head over to my aunt and uncle's house for the traditional Christmas meal of really delicious meat with béarnaise sauce, twice baked potatoes, fruit, and Christmas cookies. The little kids were each paired with a corresponding older cousin and all of them spent a lot of time hanging out on the couches looking at screens, making towers out of marshmallows and toothpicks, and tormenting the family dog. Dinner was delicious and we capped off the holiday by stripping the kids down to their undies and letting them get into the hot tub. 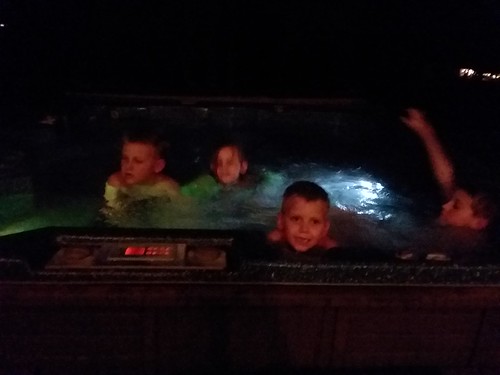 Merry Christmas to all and to all a good night!

I will be forwarding the above to any student who dares greet me in the new year with "Did you see that email I sent you?"
Posted by Becca at 8:28 PM

I got an instant pot too, and found good recipes on nom nom paleo's site. Not just vegetarian, but she uses lots of photos to help explain the settings which is great for a beginner.

Mary’s Christmas skirt is so perfect :)