After a bit of a scheduling mixup I found myself planning to attend my school's very High Church service of Lessons and Carols with all four of the children at 6:00 on a school night. This was a far cry from the contemplative experience I had originally planned with one of my friends, but it could not be helped, so I stuffed them full of Thundercloud subs, arrived early so we could park right in front, and hoped for the best.

Unexpected treat number one is that it started SNOWING while I was picking them up. They tumbled out of our nanny's car and flung themselves onto the bare grass to make snow angels then ran around the tiny lawn of Mary's Montessori school screaming and trying to catch the (very sparse) snowflakes in their mouths.

It was still flurrying when we got to the chapel, which was, honestly, SUPER MAGICAL, even though I was trying to manage expectations. The "snow" was not supposed to stick or amount to anything interesting.

We settled into our pew to be really inappropriate for the twenty five minutes we had to wait for the service to begin. 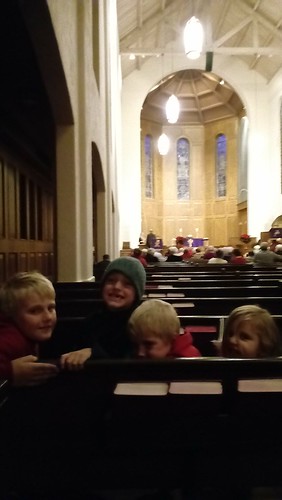 One broken candle and multiple hissed death threats later, it was finally time to start. The choir processed in singing Once in Royal David's City acapella and I was immediately glad to be there, all of us together, completely forgetting about the previous ten minutes, during which one kid farted loudly against the wooden pew in a way that echoed through the entire building (this happened twice) and also that Wes tickled Charley so forcefully that Charley launched himself over the arm rest on the end of the pew into the aisle.

The moment when the organ joins the choir is like CHRISTMAS for me, you know?

I love the Lessons and Carols service. It is so beautiful. By the time we lit candles I was practically drunk on holiday contentedness (#nerd). I took this picture of Wes singing with his candle, looking like a little English choir boy with the choir behind him with their lit candles. 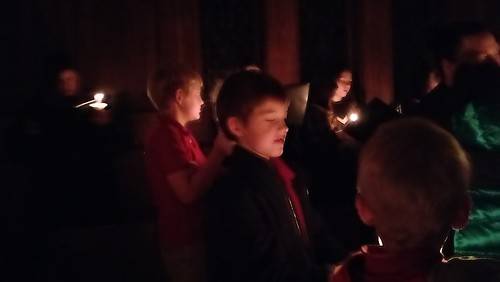 At the end you sing like fourteen Christmas carols with your candles while you wait for your turn to walk out into the aisle and out of the church. Since we were sitting near the back (because reasons), this meant I had to supervise four children with lit candles for almost fifteen minutes. The lady in front of us has no idea how lucky she is to still have her long, flowing brown hair. Not relaxing. But still special and fun. I got to hear most of O Come All Ye Faithful, which is the last song, and the one the choir likes to really let it rip on.

We managed to make it to the back of the chapel without igniting anyone, which was a Christmas miracle, and I had just gotten everyone to stop screwing around and blow out their candles when I looked through the open front doors of the chapel onto the academic mall to see A FREAKING BLANKET OF FREAKING SNOW.

The kids FLEW out of the chapel, down the steps, across the sidewalks, and into the grass. They made snow angels, they threw snowballs, they screamed "MERRY CHRISTMAS!!! IT'S A MERRY CHRISTMAS!!!" so loud. So loud.

They frolicked (in HOODIES, friends. The temperature here has not dropped below sixty in four years (#thanksCO2) and I sort of let the coat thing lapse) for about fifteen minutes before we got in the car and headed home, where it took another fifteen minutes to get them in the front door. We only went inside because Wes started screaming about his aching hands, which is what happens when you make snowballs for half an hour without any gloves on.

They were back out there again this morning (in more appropriate clothing). 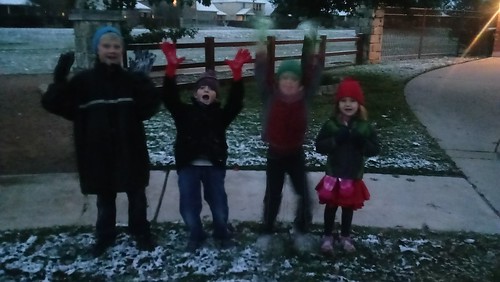 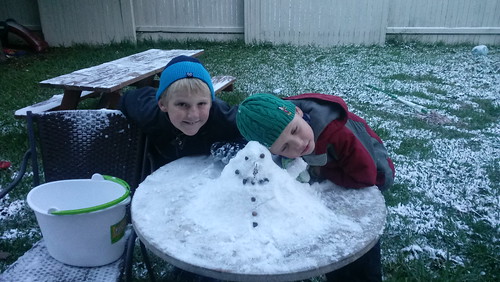 And I yell-sang Christmas carols all the way to work. I did not realize how unhappy my soul is when it is EIGHTY FIVE DEGREES during Advent (like it was on Monday). This has been a fun little break. 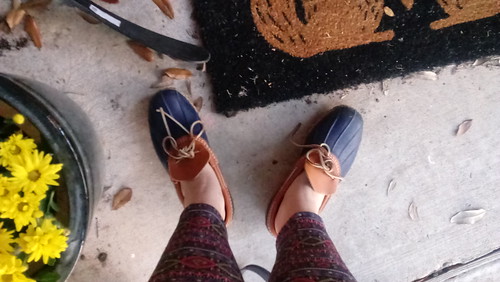 RUN, don't walk, to get your hands on a copy pf The Chieftains Bells of Dublin" if you don't already have it. The last two songs are full choir "Once in Royal David's City" followed by Oh Come, All Ye Faithful. For me, it isn't Christmas until I hear their renditions. Happy holidays!