And now to address the grading pile, the research pile, and the laundry pile

Wow, you guys. The screen on my phone has been broken for a few months--the glass is not broken, but something is wrong with the connection and the image shakes up and down really bad and it is super annoying to read, but since I go through phones like nobody's business I was determined to stick it out until at least May, when the stupid thing will be ONE YEAR OLD. But today it has gotten even worse to where I have to estimate where each letter I type would be if the screen wasn't broken and I was trying to send these pictures to myself and accidentally sent them to my dad's old email address and the university's print shop instead. Probably time to address the phone issue since it is my primary means of documenting the children's upbringing. Also all my pictures are blurry. Annoying.

But! We had a weekend and that means it's time for Weekend Update, a weekly feature in which I realize it's been an unacceptable number of days since I last blogged and slap something together while I drink my second cup of coffee at work. I'd take a picture of the second cup of coffee like a good xennial, but see above re: busted-ass phone.

Friday evening Ryan met us at church to the exciting news that not only had I signed the children up for the Live Nativity, I'd also noticed that they needed a Holy Family and signed the two of us up as well! He is such a good sport. Also, the baby they gave us to hold was super lifelike and I found myself rocking it and patting it's diapered bottom like it was a real baby. I had to put it on the table momentarily while I got my costume on and I was careful to support its head. I found this both endearing and highly unsettling. 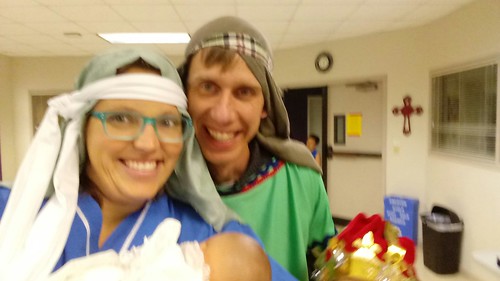 Fourth-baby was in the bathroom while I was taking pictures, so I missed getting one in her angel costume, but here are the boys as the Three Wisemen! 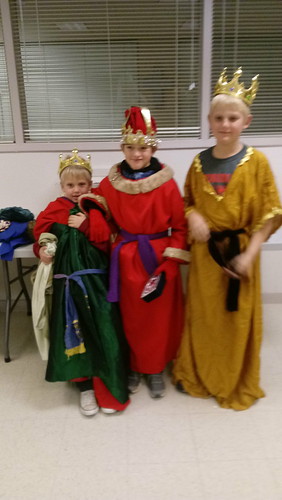 After Mary tried being an angel a couple of times she wanted to be a Wiseman too. 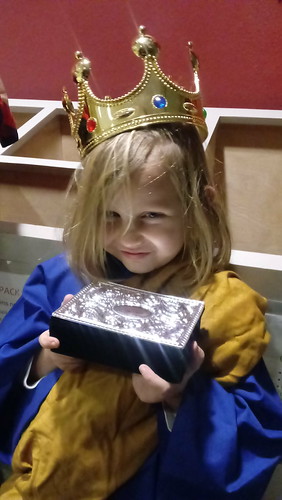 Saturday we spent the morning wresting the house back from the brink of health department intervention and then went out for pizza. 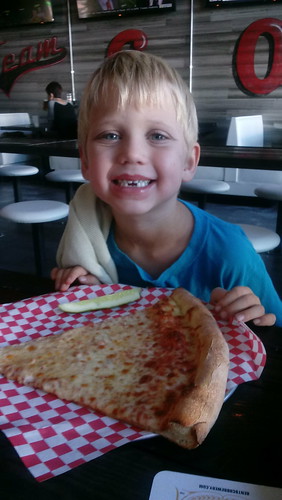 We tried a new place in our little downtown that has slices bigger than the average child's face. Extremely satisfactory. 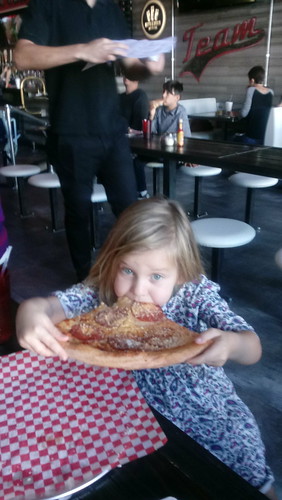 Sunday was church, donuts, and a baby shower for a dear friend (I gave her a cute little outfit, diapers, lotion, and a Guinness, which I thought would get a laugh, but instead the women all murmured "very good for lactation!" I do love all my hippie friends). As usual I couldn't sleep Sunday night, which was problematic given my 4:45 wakeup call for rowing, so I am powering through the day on coffee and positive thinking (ha!). AND since we added two sprints to our workout this morning, I feel like I can look forward to a Guinness of my own after bedtime.
Posted by Becca at 8:06 AM