I haven't had a moment to blog since we were on Thanksgiving "Break" but this afternoon I attended a coffee meeting around two o'clock and was forced to have an espresso drink in the name of collegiality so even though it is 9:45 and I've been awake for seventeen hours, the night is still young.

On Monday night we hosted a small gathering of more than forty people at our house for Friendsgiving. It was fun, the way things are fun when you have more than forty people in your house, including twenty-four feral children who I really didn't even see for more than four hours (five days after the party I found two hot chocolate size marshmallows cemented to my kitchen ceiling and a plastic fork embedded in the family room carpet). But it was also really magical to have all those people we love in our house at the same time. It was a rowdy bunch and most of them were packed elbow to elbow in my kitchen. It was a non-snarky dream come true. 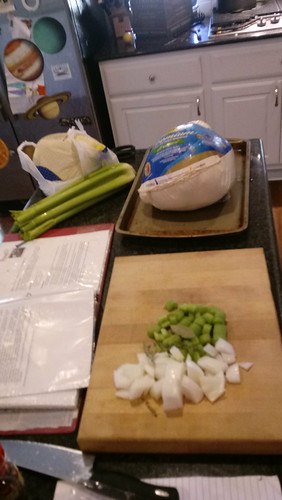 I sent this photo to some friends with the caption "I have just performed a PAP smear on a turkey. I am not cut out for the medical profession." In spite of a thorough internal examination, which yielded something unspeakable that I promptly doused in holy water and buried outside, I still managed to miss the bag of giblets--my dad discretely discarded it when he was carving and discovered it nestled in the cavity, slightly smoldered.

My friend Rosa's Texas Sheet Cake disappeared in nanoseconds. So did two cheesecakes, two loaves of almond poppyseed bread, a chocolate pecan torte, a pecan pie, three pounds of brussels sprouts, six pounds of mashed potatoes, forty-eight dinner rolls, a pot of macaroni and cheese, and an entire turkey (and a charcuterie platter and a whole bunch of dip and, let's be honest, the entire left side of the Trader Joe's festive holiday alcohol selection). 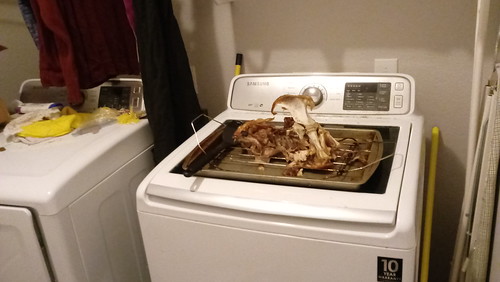 This scared the bajeesus out of me when I happened upon it the next morning.

Party highlights include following the turkey recipe to the letter only to have it come out looking exactly like the turkey in "Christmas Vacation". My mom saved the day by whipping up some gravy on the spot and serving it elegantly in one of my Pyrex measuring cups. I would go on to burn a second turkey (this one for family use) later that week. Non-sarcastic highlights include walking around my house with a bottle of wine, topping off people's glasses and chatting, watching two of my dear friends from different parts of my life finally get to have a conversation, and my pastor friend's lively 5-minute retelling of her sermon about all the family drama present in Jesus's lineage to a rapt crowd. I went to bed feeling so content and loved.

Tuesday was a hard day. Tuesday we attended the funeral for a family member's daughter, who passed away after a long illness. There were some really beautiful moments in both of the services, but it was achingly sad and the staggering unfairness of it all was never far from my mind. The rhythmic call and response of the psalms and the familiar hymns were comforting, and so was the homily, whose message--"Why do these things happen? We don't know."--was refreshingly humble and honest in a world that often tries to explain hard things away. The kids had a lot of questions, which we did our best to answer (though some of them had no answers), and they did a good job of staying calm and respectful. It's hard to be sad, but it's even harder to be sad alone. I hope the parents could feel all of the love we were and are sending them, even though we can't imagine what the right words might be.

We spent a cozy Thanksgiving at my parents' house with tons of great food and fun games. The big cousins were there, which meant each kid got their own personal big kid to play with. There were some shenanigans in the woods and something involving poking around a residential construction site down the hill. Charley and my (adult of legal age) cousin Tim shared a moment with a couple of longnecks on the back porch (99% sure Charley's is root beer). 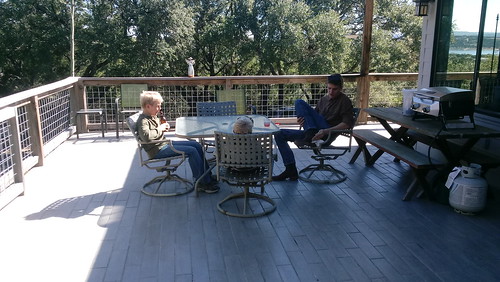 There was a traditional gingerbread Airstream craft station. 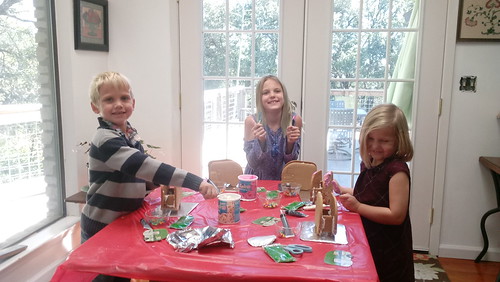 And a beautiful table (and yes, Charley and Wes *do* like to show off their top two adult teeth like that in every. single. picture). 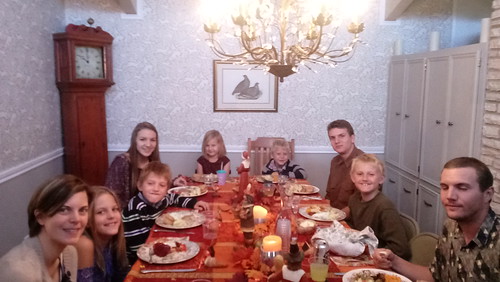 And thanks to an early feast and the cleverness of the recent time change and subsequent early-evening darkness, the kids were all tucked in bed by seven thirty. We had a nice, but pretty ordinary weekend and today we jumped right back in to THE LAST TWO WEEKS OF THE SEMESTER. The kids were AMAZED by all the good food we ate last week (ANOTHER THANKSGIVING DINNER! James exclaimed on Saturday night). It was partially because we were trying to used up extra party food and were sent home with a carload of delicious leftovers from my parents. And it was also because I had nearly a week off of work and my cooking mojo came roaring back. I commented to Ryan, while I was chopping up a giant butternut squash and supervising him massaging the kale for the massaged kale salad "Wow! It's so hard to believe that just a week ago I was so exhausted by the thought of heating up some frozen veggies and scrambling a dozen eggs that I had pizza delivered instead!"

School started back this morning and tonight we had hot dogs and macaroni and cheese from a box. There may be a relationship between those two things. Two more weeks. And one final.
Posted by Becca at 9:24 PM