Sometime on Saturday, after a day spent going to church holiday craft fairs with Mary and my sister and my niece, I realized that it was the anniversary of mine and Ryan's first date. THE NINETEENTH anniversary to be exact. Which came as a bit of a surprise because despite all evidence to the contrary I still feel like I just tumbled out of grad school into a reasonably adult suburban existence.

The fact that I realized this in the middle of a wild Saturday night spent finally tackling the box of odd socks that has been accumulating in my utility room while drinking beer and binge watching The West Wing was very apropos for where we are in life right now.

I snapped this picture to commemorate the occasion. 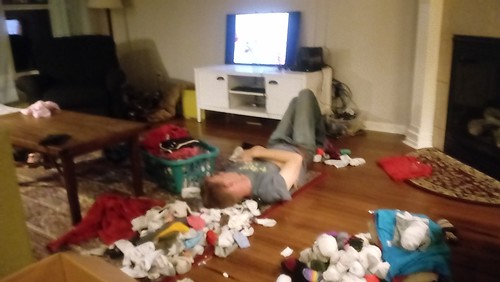 Nineteenth anniversary, WOOO HOOOO! Ryan is alive here, believe it or not. And six people have a lot of socks.

It was a beautifully mundane weekend, actually.

Charley finally had a chance to take apart the Barbie power wheel he liberated from my sister's neighbor's trash while I was distracted watching Mary fling herself into the pool over and over again. He and the neighbor kid are turning it into a go cart. 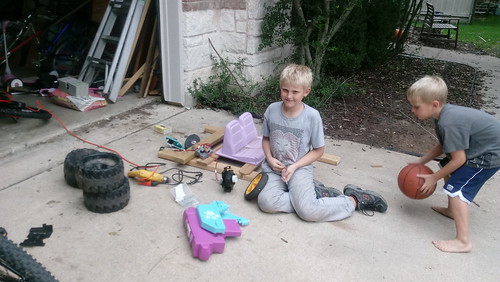 James and Mary raked up the world's most pitiful leaf pile to jump in. I guess this is a "downside" to having live oaks? 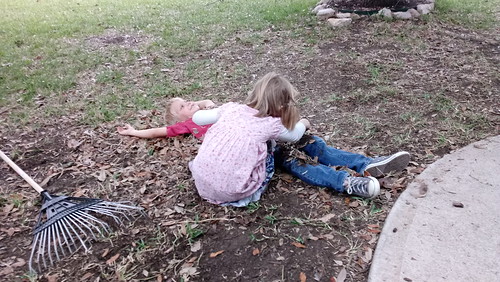 Things got more exciting in the afternoon after I drove approximately fifty miles away for a Craigslist trail-a-bike for Mary. We've been wanting one for years and now that Charley is riding a man's bike and James and Wes can both go far and fast, we really needed one, instead of continuing to take turns taking the boys out (Mary is too big for the seat and the trailer, but too young to ride her tiny pink be-training wheeled bike very far on the trail). It took some creative hammering and WD40, but Ryan got it attached to his bike and it was an INSTANT HIT. 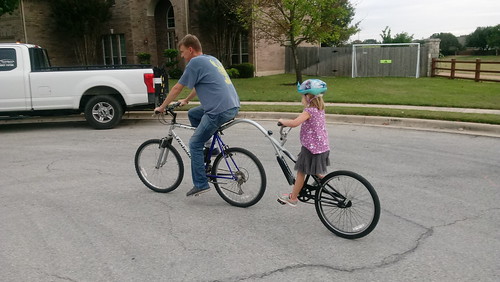 Watching her pedal that giant thing is ADORABLE. She is amazing and brave. She did not want to get off. So we took a big bike ride to a park a couple of miles away (neighborhood friend was very disappointed to stay home but we saw him out with his dad on the way back). 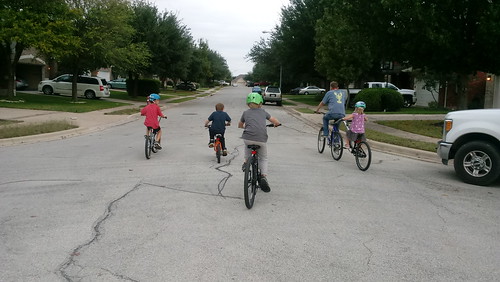 We played for a bit until it started to get dark and then rode home.

It was a TRIUMPH.

When we got home the kids watched a PBS documentary about airplanes they've been following while we made breakfast tacos for dinner. They ate EIGHTEEN EGGS, a pound each of cheese and sausage, like fifteen tortillas, and an entire pumpkin pie and then fell asleep for the night at 7:30.

Dinner was calm and happy (because the kids were calm and happy). It had been going downhill fast all week, probably because we had a string of overcommitted Scout/school program weekends and a bunch of busy afternoons and none of us had had the chance to Just Be. An entire Saturday of freetime was just what we all needed.

And then Sunday Charley acolyted at the traditional service, which meant he had to wear a robe (GOT TO wear a robe, he would say). 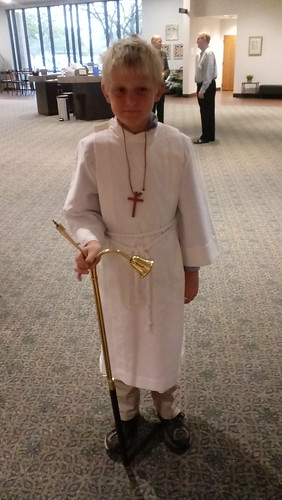 He and I went to breakfast and then met up with Ryan and the other kids back at church. I played hooky and saw a movie with a friend, then went grocery shopping and headed home to cook all afternoon while kids did homework and played and practiced piano. Finally I turned on the TV and then Mary sacked out on a chair at 3:45. 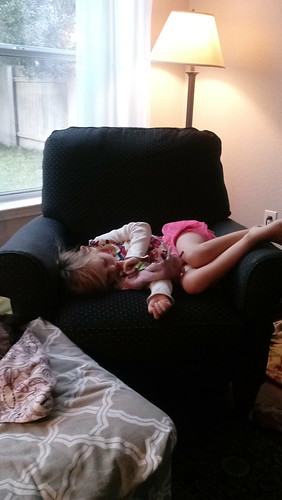