Sleepy and it shows

I am typing this on my phone you guys because my computer is upstairs. And as my friend Andrea says, I am complete balls at typing on my phone so there is a high probability this will make no sense.

Also there is some kind of bug flying around the living room and occasionally landing on my arm. Or possibly I am hallucinating.  I did whack my head pretty soundly on a cabinet mounted above the toilet in the ladies' room at Trader Joe's earlier today.

Last night I went to Together Live with my progressive church ladies and it was everything I had hoped for and more. Gosh I love smart, funny women. Both the ones on stage and the ones in the seats around me. I am so lucky. I have been reliving parts of it in my mind today. It feels cheesy to say, but it really was inspiring to spend three hours listening to these stories about strong, successful women. So good.  I have been thinking in particular about one story where a woman talked about all the times she failed and kept going.  Hundreds and hundreds of times.  She finished with a slide show of photos taken on these crazy adventures she went on that she had been terrified to do alone.  I discovered a big mistake in one of my projects this morning and while that would usually send me into a fit of histrionics (usually via FB Messenger to some poor unsuspecting friend who's at the grocery store just trying to buy some bread without a lot of existential angst), I--just kept working on it!  Fascinating.

We threw caution to the wind and went out for food after it was over and I didn't go to sleep until one o'clock in the morning. And I had an 8:30 am meeting back downtown today (I left my house at 6:30 to avoid traffic). That was not enough rest.

The fact that I got about four hours of sleep led to some questionable decision making, like going on a Trader Joe's bender on my way back to my office in which I bought approximately seventy dollars of PERISHABLE food.  Since I hadn't planned on going home for another few hours, this was an obvious problem.  OK, I thought, I will just go get Mary, go home, and then I can work upstairs for a couple more hours before the nanny needs to leave.

But on the way, I got a text from Ryan that said the appointment he was taking Charley to was starting NINETY MINUTES late.  I offered to come take over, but the appointment was over long before I could have gotten there.  I went and picked Mary up and went home.  When I got home EVERY non-school adult responsible for the children's care was at my house.  Ryan, me, our wonderful tutor, our awesome nanny.  All in my kitchen.  It was like the monthly meeting of the children's committee.  It would have been a good opportunity to strategize, if I wasn't so deliriously tired.  To wit: I put the frozen peppers and potatoes mix from TJ's into my freezer, then a few minutes later opened the freezer to put something else in, and thought "Oh look!  I already had some frozen peppers and potatoes mix!"

So then I went upstairs to continue my work from the morning only to fall asleep with my head down on my desk so soundly that I could not feel one of my arms when I woke up in a puddle of drool fifteen minutes later.

And despite the fact that I'd bought enough convenience food to keep us in dinners for several nights, I still ended up taking the kids to P. Terry's for burgers on the way to children's choir because I couldn't relax enough even to microwave some bean and cheese taquitos.  Probably because Charley and his buddy from next door were using a rope to tow each other behind a bike on a skateboard and it was like a wreck I just couldn't look away from.

They ate on the church playground because then it is a fun activity rather than a copout and also so they don't destroy my car. 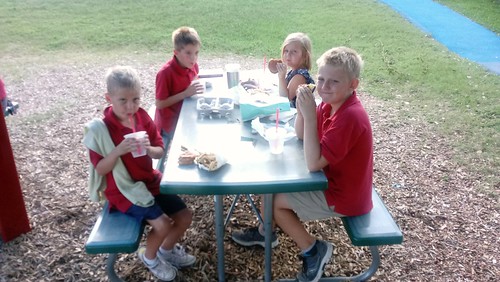 Two final things related to pictures that refuse to upload. One is that I moved a tea kettle that my mom unpacked and I haven't used since we moved in. There was a BULLET behind it in the cabinet. I can promise you that I have never in my life owned or eve TOUCHED a bullet, so it was odd to find one in my KITCHEN CABINET. I will have to call a less squeamish friend to come remove it. Probably someone who grew up in this state. For now I will continue to live with a bullet in my kitchen. And finally, I have decided that even though I live in Texas, it is OCTOBER and it is time to start wearing tights. YOU HEARD IT HERE FIRST, MY FRIENDS. RCP 4.5 ISN'T GOING TO DETERMINE MY FASHION CHOICES.
Posted by Becca at 7:32 AM