It was a weekend of fire

I'll say it again because I don't believe it either. NINE.

Wes is a GREAT kid. He loves his friends and his brothers. He loves shepherding smaller kids around. He is enviably at ease in social situations. He adores watching TV and Legos and rollerblades. He is kind and sensitive and still cries sometimes when he thinks about our dog, who died two years ago. I heard through the grapevine that he caught a cockroach in his classroom while the rest of the class ran screaming in the other direction. I asked him about it and he calmly explained that there was a roach in the homework journal basket and that he had dumped it out onto the floor to get the roach. The roach crawled under a book, so he moved the book, it crawled under another book, so he moved that one. Then he picked it up and played with it for a minute before taking it outside. He adores graphic novels and stays up way too late reading. He is approximately seven feet tall but still crawls into my lap sometimes. He has a fiery temper and tonight hulked his mattress off his bed onto the floor because we scolded him for jumping off the windowsill in the family room and almost ripping the curtainrod off the wall. OMG.

He still wanted his digger cake, though. Tradition is tradition. I'll make him a digger cake when he's forty if he wants. 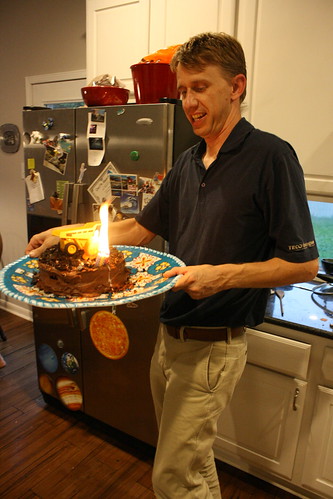 Charley figured out you could make an eight inch long flame by sticking all nine candles right next to each other. Being an adolescent boy must be amazing. 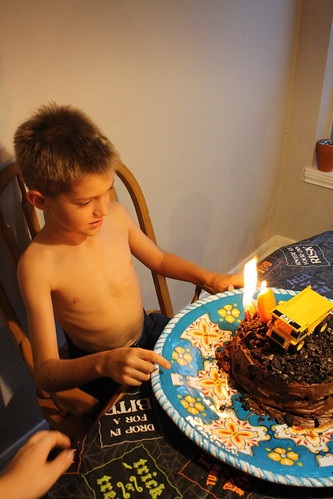 We brought a couple extra kids home with us on Friday after school and had a few more kids over later on for pizza and brownies. There were eleven kids in my house. They had such a good time trashing the upstairs together.

Today was Charley's first Sunday as acolyte. He has been looking forward to this forever, so I was pretty excited for him. He was terrified, but he was partnered with my friend's daughter, who he's been friends with since they were in the nursery together. They did SUCH a good job. He said the hardest part was holding the offering plate up in the air while we all sang the doxology. I was so nervous for them every time they had to walk up and down the stairs. But they did great! I've said it once and I'll say in again, watching kids do people things like this is SO COOL. 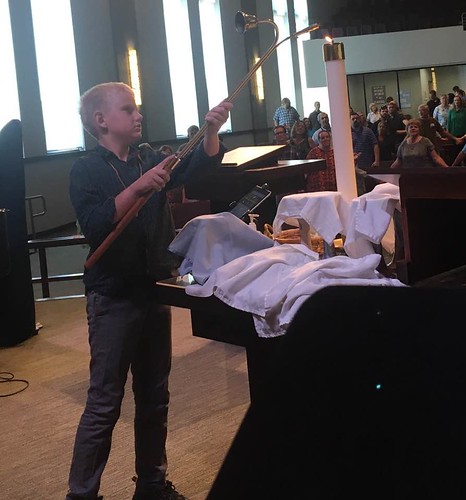 Thanks to Miss N's mom, our friend M, for taking this awesome picture. It helps to have friends in high places. Like the stage.

Mary asked to go to the bathroom during church, so Wes walked her out there and when they came back, they came back with THE OTHER UH OH.

Recall that we lost the second of two Uh Oh's at church in June and Mary wanted to BURN IT DOWN. Ryan and I canvassed the whole upstairs on hands and knees with flashlights one night trying to find the FIRST Uh Oh that went missing several months before. I swore it was in the house somewhere, but we never came across it. Then our friend who works at church, did an exhaustive search of his own and found the NEW UH OH, Ryan went to get it, Mary started sleeping again, and we figured we had lost the first Uh Oh for good.

This is tedious and confusing.

My point is that today Wes found the First Uh Oh sitting on a shelf of toys in the cry room. There is no way it was there when our friend was searching for the other one. I think it took a little vacation at someone else's house. SO WEIRD. Mary came home and immediately took a three hour couch nap with the "good" Uh oh while the other one stayed in my purse.
Posted by Becca at 8:32 PM