I think the really thrilling thing about teaching a new class in an unfamiliar subject that begins at 8:30 on Mondays is the seat of your pants feeling you have all weekend when you are refereeing sibling squabbles, scrubbing toilets, and (at last) chilling on the front lawn with your husband because THE KIDS HAVE OFFICIALLY TAKEN OVER THE HOUSE instead of preparing for class.

This is a good way to look at it because the alternative is to be COMPLETELY OVERWHELMED ALL THE TIME.

Fortunately, I attended a research talk at Bigelow Labs this summer while we were in Maine and it made an EXCELLENT introduction to food webs. Class was kind of awesome today. I was a little bouncy when I left.

Our row (5:45 AM) was also awesome this morning and then I felt so good that I blow dried my hair and took a selfie in the parking lot. 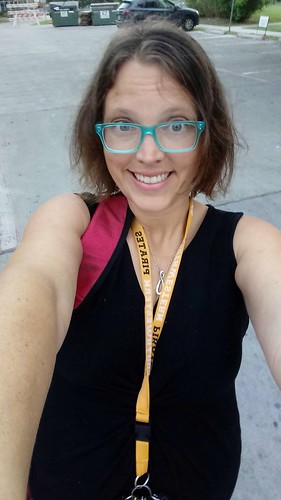 This is as swingy as my hair gets when the dewpoint is 75F.

I am really loving this semester, actually, in a totally weird non-sarcastic way. I mean. Half the time I am teaching OUTSIDE. On Thursday a faculty member who saw me outside with my class on Tuesday encountered us outside again and said with a smile "Don't you ever teach in a classroom?!" It was a great moment. I should probably have asked him to put that comment into an email directed to my chair.

Things that are not going well? Yesterday. Holy dang, you guys.

Ryan was singing at church, which meant I had to get everyone up and going to arrive at 9:30. This seems simple because despite the way we have to drag their comatose forms from bed every single weekday, they spring out of bed fresh as daisies at 6:15 on weekend mornings because the first kid downstairs gets control of the remote. But they were SO SQUIRRELY! And James and Mary got into a fight over TOAST! 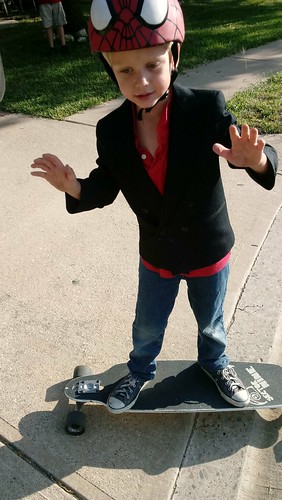 James got ready extra fast because he knows he can use extra time to skateboard.

(Charley is older and wiser and knows to sleep late, which meant that I was shaking him awake at 8:40 like GET UP GET GET UP GET UP!)

Church was great because the kids were up and down the whole time. Wes got his third grade Bible, Charley went up to be recognized as a future acolyte, and Wes went up for the birthday prayer. The other kids made an annoying mess out of paper but were otherwise quiet. 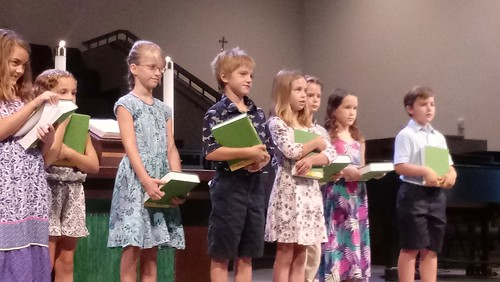 After a third grader celebratory lunch at church we headed separate ways--Ryan took Wes to a scout meeting and I took everyone else. We were supposed to be going to the store to get a week's worth of groceries, but instead had a big fight about shoes in the parking lot of the store and went home all huffy. I angry-cleaned all the bathroom counters and floors in the house and did two loads of laundry. Ryan got home much later than expected from the scout meeting and settled in to bicker with the kids about homework while I took Charley to the car wash with me. I've been meaning to take the car in ever since we got back from our huge road trip and it finally reached the level of disgusting where it seemed worth sitting at the car wash for however long it took to get it somewhat presentable again.

Friends. They took it back and forth between the washing station and the vacuuming station THREE TIMES. This would have been hilarious (because OMG GROSS) except that it took AN HOUR AND TWENTY MINUTES.

It looks beautiful now. There are no brown smears all over my cupholder and I don't hear a loud sloshing noise as pea gravel slides from one side of the car to the other every time I go around a corner. It's an amazing transformation. But still. AN HOUR AND TWENTY MINUTES.

This meant that I was completely undone by the time we got to the grocery store, scrapped my plan for a healthy dinner, bought a bunch of hot dogs and boxed mac and cheese instead, and got home. Walking into, in that state of mind, to the Epic Homework Battle for the Ages was not ideal.

By the time the last kid was tucked in and I had used all remaining emotional control to make sure everyone felt safe and loved and listened to as I tucked their covers in tight, I was DONE.

Then I walked downstairs and Charley asked me "Was I bad today? I heard you say something about what a terrible day it was." Oof. I gave him all the hugs. And then I didn't even see them this morning because I was rowing. #MOTY Early bedtime for me.

In other news, Mary and I went to brunch with my sister, mom, and niece on Saturday morning, which was delightful and girly and fun. Mary was SO PROUD to be out with the big girls that she sat up a little straighter and smiled adorably every time we made eye contact. CUTEST THING EVER.

We were on our way to my house to hang out some more with my sister when I got a text from Ryan saying that Wes had fallen off his bike at the scout bike rally and hurt his mouth. We met them at urgent care where Ryan got out of the van and handed me a piece of tape that was holding PIECES OF WES'S ADULT TOOTH. His lip was huge and swollen and bleeding and his tooth was...interesting... but the doctor said there was nothing else major broken or injured and referred him to our dentist. Wes perked up quickly with some cat videos and soft mac and cheese and ice cream for lunch but Ryan may never recover. That night Wes took off his shirt to go to bed and we all discovered that his chest was also covered in scratches. Poor kid! It must have been quite the spectacular fall (He was in a different group than Ryan and was riding with a couple of other dads and kids. One of the dads offered to give us Go Pro footage of the fall. We declined. They took good care of him and he was eating a popsicle when Ryan got there). If you see Wes he will probably show you his tooth. Or what's left of it. He is so proud. Yeesh.

Now I'm gonna grade grade grade grade (do you also hear "all I do is win win win win" when you read that?). And get ready for tomorrow's research meeting. I feel like such a real professor. Crazy, you guys.
Posted by Becca at 9:21 AM

We should become real life friends - I teach at UT. I taught environmental science there for several years (sounds like that's what you may be teaching?) secameron at utexas.edu

The tooth - yikes!! Teeth creep me out!!