Someone remind me to pick up the children at school

I AM EXHAUSTED YOU GUYS.

All good things, but it was a really freaking busy week. And I've taught outside three times, which is super fun, but also tiring in a two-mile-walk in a 100 degrees kind of way.

Monday my friend C came over and we worked on needlework together. It was as fun as I thought it would be, which is very.

Tuesday was an event I have been looking forward to since I was born called "Beer and Hymns" at a local brewery. 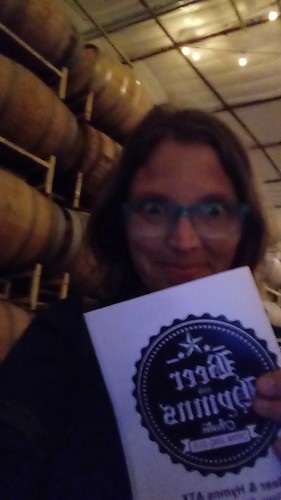 It was good. Very very very good. Beautiful, meaningful music and lots of enthusiastic singing (too enthusiastic, in my case, because I was hoarse when I got home). As you know, sing a longs and hymns are two of my favorite things and I've always wondered why as a society have stopped the kind of hearty collective singing in bars that you see in pirate movies. So this was something I would have only dreamed of attending, until someone MADE MY DREAM A REALITY. Also it was the kind of relaxed, friendly, casual, happy thing that church should be but sometimes isn't because we make it too fussy (possibly because we take our children there?). A bunch of friends were there. My friend Pastor K worked the cash register for a while. Then she led the band for a song. She has many talents. Beer and Hymns was one of those things you do where you wake up happy the next morning (and then find yourself humming hymns all day). I lovely oasis in a hectic and noisy world.

Wednesday night the boys gave Mary a ride on the go kart they made out of an old lawnmower deck and she got engine grease all over the new mini-Boden dress I found for her at a consignment store. I don't mind the lawnmower deck riding or the grease, but I would have rathered it not be on her new dress. Facebook came to the rescue and gave me about ten different home remedies for when your baby girl gets ENGINE GREASE ON HER DRESS (which probably was more like, what to do when your husband gets engine grease on his shirt, because most four year old girls aren't RIDING AROUND ON LAWNMOWERS) and PLAIN OLD DAWN came to my rescue. (She was wearing the dress because she had just returned from children's choir, which she finally gets to attend "like the brothers". She takes this so seriously that she likes to dress up for the occasion.) 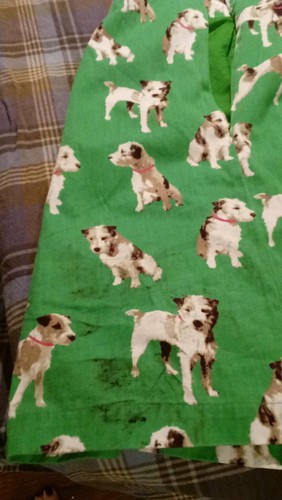 Engine grease on dress. I must teach her about play clothes.

The other day after work I took a picture of my grocery order because it was all alcohol and hot dogs and macaroni and cheese and cookies. Yesterday morning I took a quick trip to the store between a doctor's appointment and work and bought some things for dinner and was struck by how nutritionally optimistic I was feeling relative to my after-work self. I mean, PARSNIPS FFS. 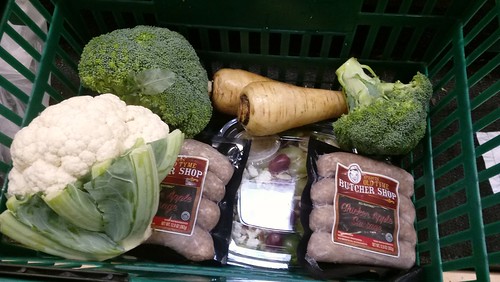 I turned all of that into a delicious sheet pan supper that everyone actually seemed to not hate. WIN. 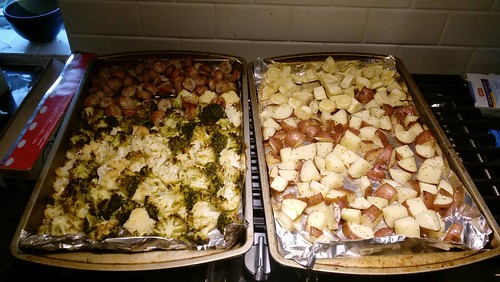 I know you are supposed to mix everything together for a sheet pan supper, but I do it this way to facilitate picking by the various food snobs in my family (no veggies, no meat, no carbs, no touching).

Finally, it feels like the semester just started but it would appear from looking at my desk that it is in fact "mid-semester," when the volume of paper threatens to tip over and crush me to death. And this is with one class turning everything in digitally!

Finally finally, I have to remember to pick the kids up at school today because our sitter is out of town. I am actually looking forward to this, but since it is a change in routine I am slightly stressed that I am going to forget and get an angry call from the school. TGIF!!!!!!!!!
Posted by Becca at 8:57 AM