I've heard it's summer you guys. I mostly have noticed because it's hot outside and freezing inside my office (my new office, since I got involuntarily relocated from my other office a few weeks ago as they prepare to knock down the building). I've been spending a lot of time in there because it's summer research time until the end of June. The kids have been having a blast with a parade of wonderful babysitters who take them to playgrounds and the pool and splashpads and the library. They've had picnics and gone to Lego classes and watched a crapton of TV. #memories.

I can't wait to join them. Only 2.5 more weeks (of cramming about eight weeks of work in, should be NBD).

The summer reading program is MAGICAL. We have never filled out a reading log in our lives (our kids are readers and always have been and we just can't get it together to fill out the damned form every night, so I just explain all that to their teachers and so far they've been willing to deal with this small act of civil disobedience. Probably the crazed look I always have in my eyes.). But now that they know they can earn a pair of sunglasses or a coupon for an ice cream cone every time they read THREE HUNDRED MINUTES, they are OFF TO THE RACES.

Case in point: this morning. Wes has seventy-seven minutes to go before his first prize and he is determined to sneak them in before the sitter gets here at nine. Charley read a hundred and six minutes the evening we returned from signing them up for the program at the library.

Happening now, when they are usually fighting with me about what is an appropriate Netflix choice. 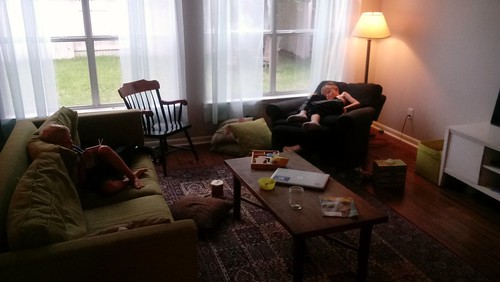 I might have to get some trinkets from Oriental Trading and see what else they're willing to work for.

Wes has lost approximately all of his top front teeth in the last three months. 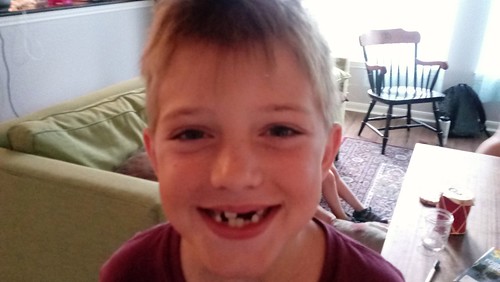 The kids had an adorable birthday party for James's lovey the other night. Here they are playing Duck Duck Goose (as viewed from one of the tiny windows behind our stove which are basically the reason we bought this house). 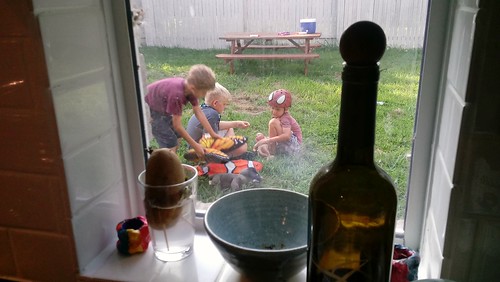 Yesterday James had an appointment with the allergist which unexpectedly (should not have been unexpected) resulted in him being tested for allergies. He got thirty-six scratches on his back and eight shots in his right shoulder. Then I bought him this giant ice cream cone. When he got home, he proclaimed it "the best doctor's appointment EVER". 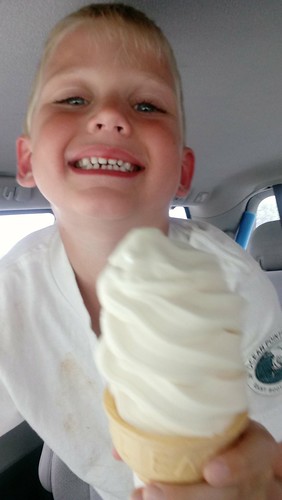 Speaking of James, a couple of days ago he and I were sitting out front and he wanted to play with some kids. I told him that I saw a family with a bunch of boys on the next culdesac over and suggested he ride his bike the fifty feet down the trail to see if they were out. When he hadn't returned in twenty minutes, I sent Wes after him. When Wes still hadn't come back ten minutes after that, I sent Charley. Then Mary and I walked down the trail to see if we could find them. Wes was coming up the trail the opposite direction and told me he had searched the playground too and hadn't found him. There were no kids out on the street anywhere and James still hadn't checked in. At the forty-five minute mark I freaked out and called Ryan, who ended up finding him playing on the next street over, but on the other end from where I had looked. Ryan told him he had to go home and check in and then I followed him back on my bike to meet the mom. She told me "He saw my son's bike on the driveway and knocked on the door and when I opened it he said 'My mom told me to go find some kids to play with.'"

Fortunately she thought this was awesome and exchanged numbers instead of calling the police. We had a nice conversation and she invited us over for a future dinner, saying "You guys seem really normal. I need more normal people in my life."

Normal for us: I could only find three clean towels Monday night so James and Mary had to share. 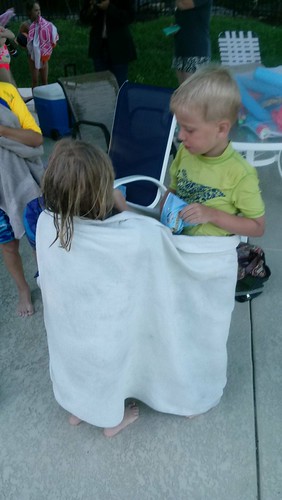 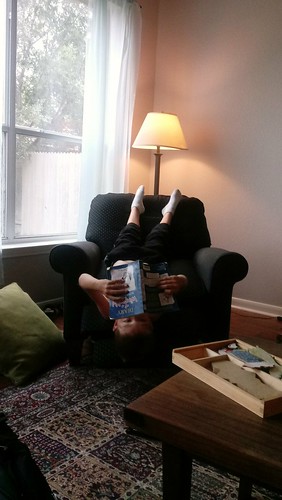 Gotta get ready for work. Bah.
Posted by Becca at 6:17 AM