As I mentioned earlier that we went to church on Saturday night last week. That was because it was one friend's last sermon before she moves to another church (a church she will be lead pastor at. I am incredibly proud of her.) and also because another friend's kids were being baptized. It was a really lovely service and the kids' behavior was middling to good, so I call it a win. Usually after the service we spend a few minutes standing around talking to friends while the kids run willy nilly all over the rather large campus of the church doing things they will probably remember with a sigh in twenty years (once they hid under the stairs and screamed when people walked past them into the hallway and scared the pants off a few people. Memories).

We left rather abruptly because we were going to a reception for the friend whose kids were baptized and she had bought that really good chocolate cake from Costco, so I was eager to get there.

Mary told us, as we were pulling out of the parking lot, that she couldn't find her lovey, which she calls "Uh Oh". I figured it was in the car somewhere so we didn't turn around to get it.

When we got home for bedtime we looked all over the car for it. I stupidly texted my friend to say we might have left it at her house and she spent an hour looking for it, totally exhausted. I texted another friend who works at church and told him that we might have left it behind somewhere in the sanctuary.

He responded forty-five minutes later with "I looked in the usher station, the sanctuary, the lost and found, and the welcome station. No luck, but I will keep trying!"

My village, you guys. They are the BEST.

Meanwhile, Mary was an emotional WRECK. When she hurt her tooth at the Concert in the Park she sobbed miserable bloody sobs into my shirt "I want Uh Oh! I only want Uh Oh." She reached a premenstrual teenager level of weepiness on Monday, crying over EVERY LITTLE THING.

She also couldn't sleep. She would stay up until ten thirty before collapsing from exhaustion then wake up an hour later. We tried to give her some other blankets that kind of FEEL like Uh Oh, but SHE KNOWS. She is practically FOUR.

I offered the kids a $5 reward for finding the OTHER Uh Oh which is lost somewhere in the house and Ryan and I spent one night crawling around the entire upstairs on hands and knees with flashlights, searching every possible nook and cranny. It looked exactly like the Watergate scene on Forest Gump.

Mary continued to teeter on the edge of a complete meltdown at all times. She was feisty and angry and snapped at all of us over the silliest things. It was like living with a tiny version of myself and it was exhausting. I started to mentally figure out if I could somehow SEW another Uh oh. And whether it would be appropriate to ask my sister's MIL to make her another one, even though she's already made her TWO.

Wednesday night we were driving home from swimming at a swimming hole all sun kissed and exhausted and happy when I overheard James tell Wes about how he had THROWN UH OH IN THE CHURCH BALCONY.

My head swiveled around like on the Exorcist and I looked him dead in the eye and asked him to repeat himself very slowly.

It landed in the balcony, he said, by the little wall with the metal fence.

I immediately texted this intel to the friend who works at the church and he responded within seconds.

"The playground side or the road side?"

I asked James. He had no idea what I was talking about.

"When you looked out the window while you were throwing Uh Oh, did you see a ROAD? Or a PLAYGROUND?" I said slowly, in a scary Tommy Lee Jones voice.

"Road. No. Playground. It was the playground."

I texted my friend back.

Minutes later I was forcing Charley to practice piano while Ryan read to James and Mary and Wes wrote a letter to his favorite YouTube stars when my phone chirped. It was a picture from my friend. 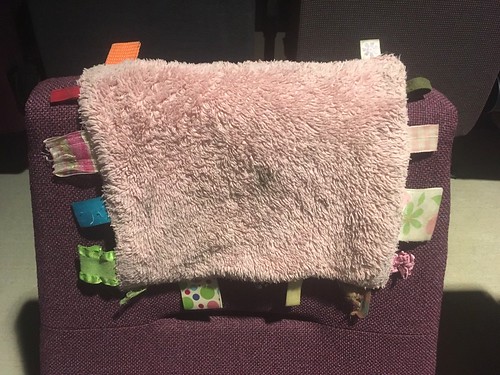 The house ERUPTED into excitement. Ryan immediately jumped in the car to go get it. Mary stood at the door watching for him for nearly an hour. When he got home she ran around the upstairs yelling "UH OH! UH OH! UH OH! UH OH!" And once she had it she fell asleep for approximately sixteen hours. 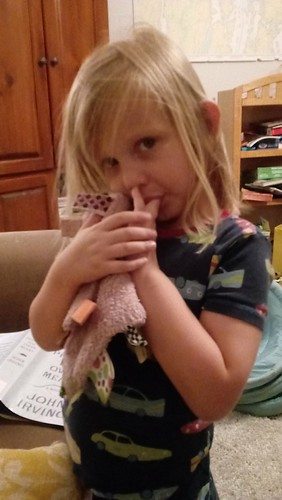 She has been cuddly and loving ever since. She gives us all two kisses and two hugs before we go to bed. She has not screamed at me once. Uh Oh is never leaving the house again.
Posted by Becca at 6:21 AM

i was on the edge of my seat for poor Mary! Uh Oh is the sweetest lovey name ever. Is poor James still in the doghouse?