We kicked off summer "break" with a week of cobbled-together childcare and haphazard work days necessitated by the fact that the kids' school gets out a week before everyone else's and no camps are open. Tuesday they were on campus with me and a girl who goes to high school at their school, who was also out. They had a great time, but she had to leave at 1:45 and then I had to abruptly leave a meeting right in the middle when I could HEAR them through the wall. I'd left them in the kids' book room of the library but apparently five thousand books weren't enough to keep them occupied for an entire hour and they somehow unearthed a box of animal masks, which meant naturally that it was time to run around the room screeching like falcons, attacking prey, and other hilarity.

Other things that have happened... Monday I started the day with a vigorous row and coffee with my boatmates, followed by forcing the kids to straighten up their rooms and a cookout with friends. 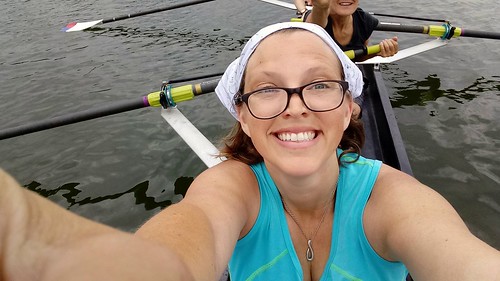 We had a fancy dinner party. 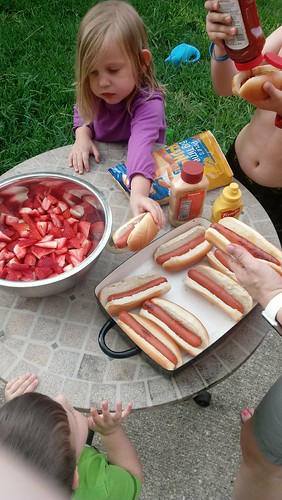 My friend Rosa gave me the Birds of North America poster I've had my eye on, which gave me the motivation to finish cleaning up the dining room. It makes me so happy. 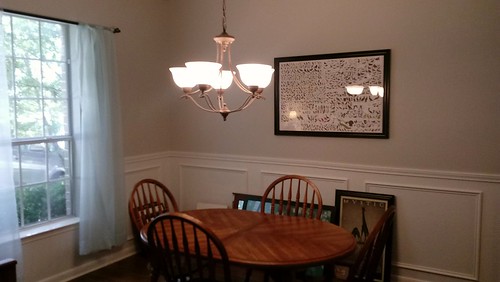 I bought a desk on Craigslist, uncharacteristically ending up with a giant contemporary metal and wood monstrosity instead of the tasteful traditional model I was hunting for. They threw in the lamp for five bucks. I really love this corner. 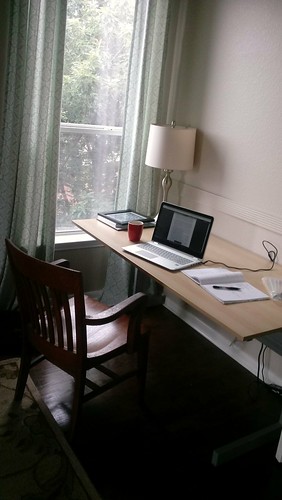 Had a bit of a scary moment with James Wednesday night, when I got home to find him draped on the couch feeling punky. The babysitter had given him some Benadryl for a cough (after texting me). I made him a doctor's appointment for that evening and busied myself with dinner, only to find him breathing rapidly and unwilling to come to dinner when it was done. Ryan had just gotten home and I threw James and a bowl of dinner in the car and told him to GO. The receptionist heard him breathing and sent him right back. Three breathing treatments, two chest x-rays, and a dose of oral steroids later the doctor shrugged her shoulders and sent him home with a lunch bag full of albuterol. When he got home for his fourth breathing treatment he told me cheerfully that he'd had to do it three times at the doctor's office because "I didn't know I was supposed to breathe it in the first two times."

He's been on oral steroids ever since and they make him COMPLETELY INSANE. My friend Heather stopped by to drop off her pulse oximeter just in time to see him throw an epic tantrum about not getting to play outside, which ended when he ran out the front door and tried to sink his teeth into a wooden pillar on our front porch. Bonus, his oxygen level was 99% after all that screaming! Today after lunch he ran around the first floor screeching MOO COW MOO COW MOO COW before attempting to sit in a chair, missing, and falling to the ground, still screaming MOO COW. Today was his last dose. It'll be good to take it down a notch. Or seven. 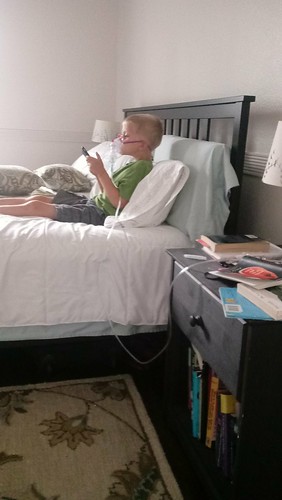 He is feeling better now and I'll be looking forward to talking to the allergist next week.

Saturday we took the kids to a free kayaking clinic at the lake. 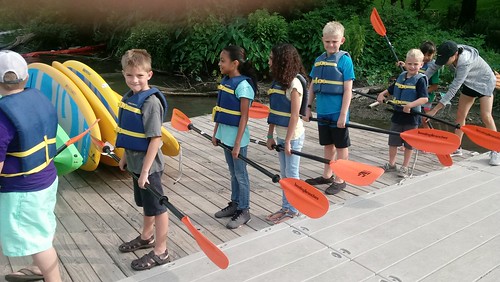 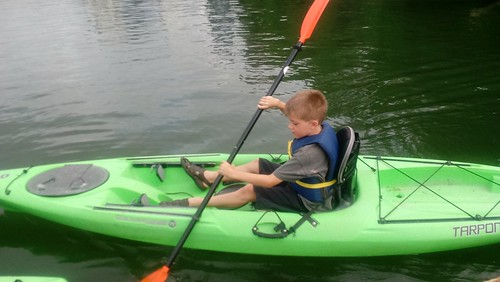 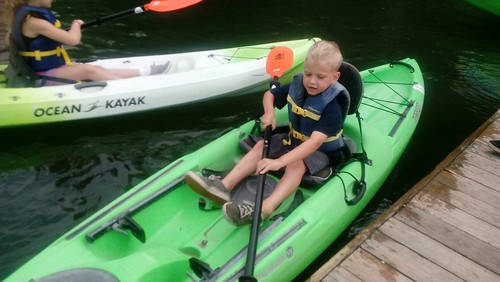 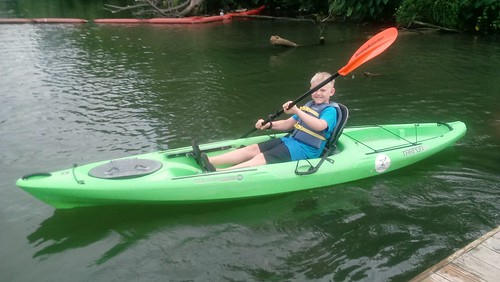 It was for ages 6-10, but one of the counselors took Mary out with her. 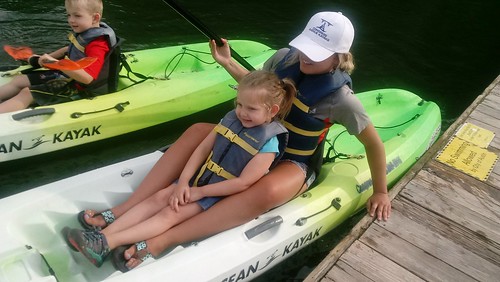 (Bit of an awkward moment when Mary refused to get in a boat with the first parson who offered, a perfectly nice guy named Alex, but FLUNG HERSELF into the boat with Megan)

James and two other kids had to be towed back to the dock (because otherwise we'd still be there waiting for them, not because of the breathing issues). 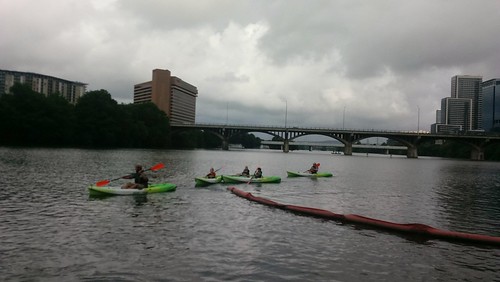 I showed the kids how to row. 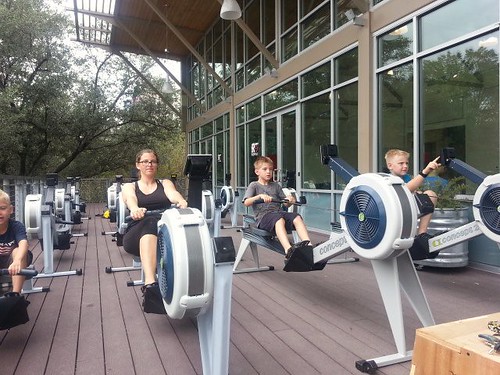 And then we happened upon the public opening party for a new sculpture. Ryan had run to get us all some breakfast tacos because we were both getting nervous that the kids were about to get hangry, but when he returned he found all five of us lounging in the grass drinking free Topo Chicos and listening to music. The kids managed to steal like fourteen coozies and three high end bottles of water each, not to mention the armloads of popcorn. There was cold brew for the adults (Me: Ryan, I'm going to go get a cold brew, want one? Ryan: [surprised slash judgy] No, it's a little early for me. Me: It's *COFFEE*. Ryan: Oh.).

And today we went to church. Rock and Roll Church to be exact (the Rock and Roll Church at the church we already go to. This feels like a big change, but it's really not). The kids did their part by ditching the sweater vests and rolling up their sleeves. Mary paired her sundress with cowboy boots. I wore skinny jeans. IT WAS MADNESS. 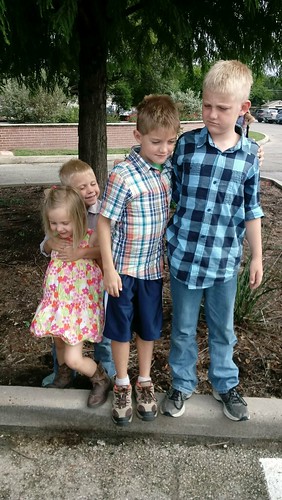 We're going back next week. Everyone loved it. 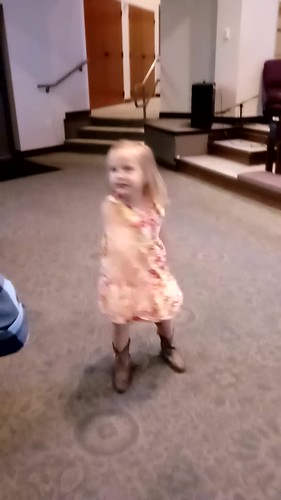 I am 100000% sure you already know this but Xopenex is what our pediatric pulmonologist (sp?) calls "albuterol without the shaky isotope" and it is so much more pleasant to be around my two when they are on that as opposed to straight albuterol. Just a thought for next time!