Up up and away

This morning I dropped all four kids off at the sidewalk leading to the Sunday School building. Two of them spilled out of the car carrying their shoes under their arms. James helpfully offered to drop Mary off. I try to avoid walking the puppies across the crazy parking lot because it's hard and scary, so I typically drive them to the sidewalk. But I've never dropped Mary off like that. And normally they have their shoes on. It probably looked like I was surrendering them.

Later during the service, Wes managed to get himself stuck in a folding chair (our church has movie theater chairs in the back, which I hate because the kids can't sit in them normally (SPOILER ALERT). I was already kind of annoyed and willing myself to calm down and enjoy the music (it was a special music Sunday) when I looked over to see Wes looking at me with tears in his eyes, willing himself not to cry, which must have been hard because HIS ENTIRE LOWER BODY WAS STUCK IN A CHAIR. His legs, which were bent sideways at the knee, were jammed down inside behind the folding seat of the chair. The music was so pretty as I tried to wrench him free. He wouldn't budge. As quietly as I could I motioned to my friend Rosa that I needed her to send her husband up to help me. Unfortunately, they couldn't figure out what I was saying. Fortunately, Wes somehow got himself free while I pulled on his upper body. I tried to stomp out of the sanctuary in a huff, but the kids were confused and no one followed me. I reluctantly sat back down. I'm glad I stayed because Charley got WAY INTO the African-American spirituals were were hearing.

The music was the best. But I was a giant stressball. Naturally I self-medicated when I got home. 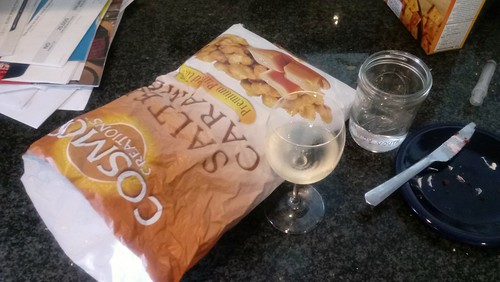 We watched a ton of TV and then I told the kids to get the heck outside and run around. Mary came back in shortly afterward because she got hit in the mouth with a doorknob and we distracted her on the couch with an ice pack and some (more) TV. I nearly jumped out of my skin when I turned around to find Wes getting his TV fix from the window (CREEPY). 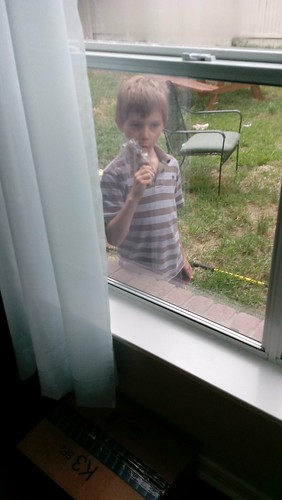 We brought the old couch to the new house finally and put it upstairs in the second living area, which we think of as the kid living area and it looks weirdly tiny. It's a really cozy room now. The kids and I did stories on the couch up there tonight and it was the best. 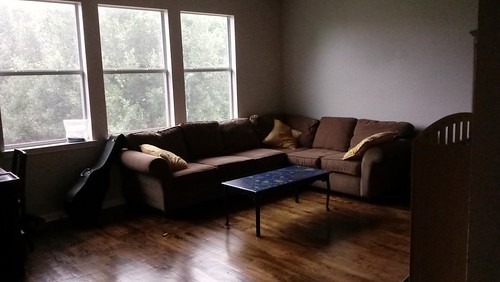 Last night I went to my friend's graduation party and came home with a big box of mini sandwiches that I packed up after she encouraged me to take some leftovers. #noshame 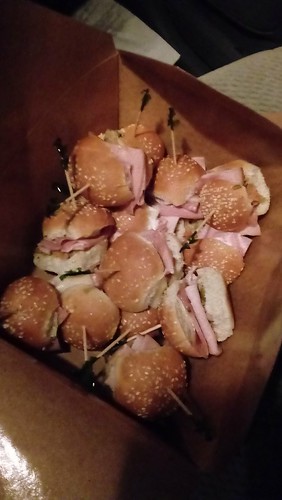 Charley and I ate all of these for lunch.

OH, and did I mention? Friday I got back after spending a week in El Paso LAUNCHING WEATHER BALLOONS. 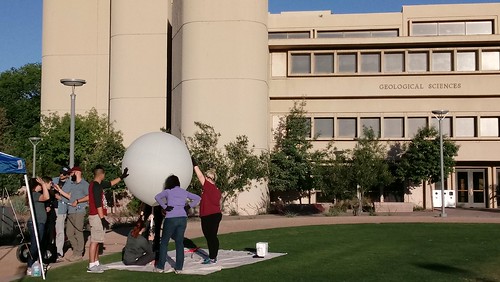 It was such a cool workshop. And El Paso is lovely. The mountains were the best. I had no idea. You can even see Mexico from parts of the campus. Incredible place. Really great data discussions every day and of course, we launched weather balloons. 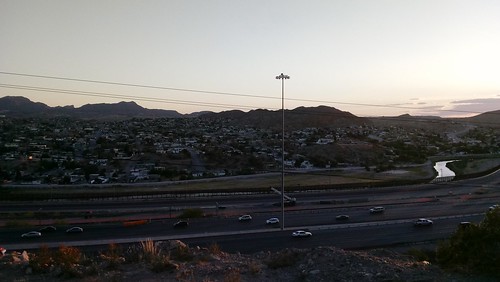 And after five years of hurricane fieldwork, which often involved wet clothes, long days with no electricity, and fire ants, a field project where you can have warm cookies delivered to the launch site was downright refreshing. 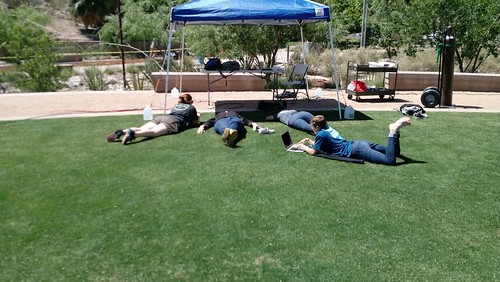 They asked for volunteers to keep an eye on the equipment between launches so they wouldn't have to break it all down. We were happy to oblige.

And now I'm feeling all nice and motivated to power through the rest of my six week summer research time. And the kids get out of school in FOUR DAYS. Let that sink in. Gah. I'm trying not to let it sink in too much because then I would panic about how I DON'T HAVE CHILDCARE LINED UP FOR NEXT WEEK. I'm sure something will come up. Like my blood pressure.
Posted by Becca at 7:11 PM

You're my mom-hero. My kids would have been loudly wailing if they got stuck in the chair, and then probably would have flipped me a bunch of attitude for being upset. I admire the fear you've installed in them (in a good way!)