This month is one for the record books re: COMPLETE INSANITY

Wow, you guys, I knew it was a long time since my last post, but I had no idea that it was nearly a MONTH ago. To be fair, this month was a ridiculous shitstorm of appointments, work, housework, and doctor's appointments. All of that would have one day long ago been great blog fodder, but now just renders me semi-conscious at the end of the day and things like being witty and having perspective just seem too hard. BUT! Here we are.

Also, the new house does not have internet yet, which (clutching pearls), yeah. It should be installed this afternoon and I really want to hassle Ryan about setting up the TV after that but he is busy getting the other house (AKA "our nest egg") ready to go on the market (next week) and I feel like my need to watch Parks and Rec while I fold laundry takes a backseat to financial solvency. Also I haven't been doing laundry because while we were doing a last walkthrough before closing I saw AN OWL crawl into the dryer vent from the outside of the house and I do NOT want to start our new homeownership by accidentally cooking Hedwig or starting a fire.

Let's back up a bit though to explain why Ryan and I have been going through pounds and pounds of coffee and bottle and bottles of alcohol in the last month. Pretty much only those two things and some sandwich takeout thrown in when we're feeling hangry, actually. Last weekend went as follows:

Wednesday: Something related to the old house--carpet guys maybe? Followed by giving an exam. Was supposed to be followed by the kids' student led conferences, but I nearly had an emotional breakdown due to the tight schedule, made other arrangements for the conferences then texted the nanny and asked her to take the kids for a treat and spend some time outside instead of rushing them all over the Austin Metro Area trying to make All the Appointments. Then we had a doctor's appointment for Charley, drive through dinner, and a two hour choir rehearsal.

Thursday: I packed. And cleaned. And packed some more. Walk through of the new house. Wes's rescheduled student led conference. Something else I don't remember.

Friday: CLOSE ON THE NEW FREAKING HOUSE. Have milkshake for lunch. Start moving some of our crap belongings into the new house. Have weird slushy afternoon with kids coming and going and eventually LEAVING FOR A CAMPOUT WITH RYAN while my mom and dad and I packed up as much as we could, assembled bunkbeds, and met my amazing friends for "The Worst Party You've Ever Been Invited To," which was really the goal I had worked towards all week. We took three minivans with the seats down over to the storage unit and loaded up as much as we could, then dragged it all into the house, ate a ton of Chinese food and beer, and got the kids' rooms ready for them.

Sidenote: I have amazingly helpful, wonderful friends. Friends who couldn't make it Friday have been stopping by with dinner, offering to help move a truck/van load of stuff, putting ALL the kids' clothes in their dressers then breaking down and removing a carload of boxes. It has been awesome. It's like when you have a baby and your village rises up around you and supports you. Except this time my nipples aren't bleeding. Yet.

So this is what my old house looks like without six people living in it! 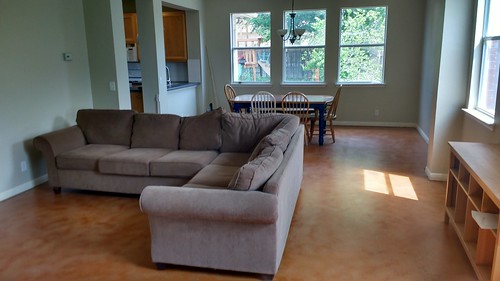 It's kind of hard for me to be there right now. It's like when you break up with someone. Even when you know it's for the best, you still need a few months before you can run into them at the store without it being weird and sad.

It looked kind of sterile so I added a rug and a dresser with a lamp on it to be a very awkward focal point for the living room. 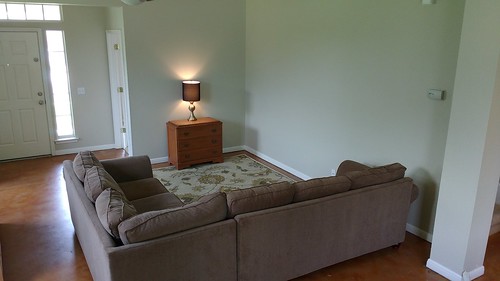 This is the view from the front door of the new house. It makes me happy every time I see it. Not sure if it comes across here, but the kids have made approximately ten trillion paper airplanes and thrown them over the railing on the landing of the second floor. This will be charming and amusing for about six more days and then it will be infuriating. 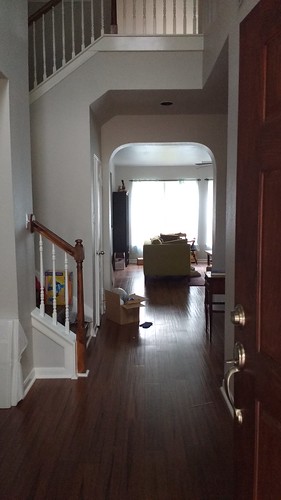 My favorite room and the picture that makes me do a triumphant fist bump because THE GREEN COUCH TOTALLY MAKES THE ROOM. (Did we talk about the green couch yet? Because I randomly bought a green couch from a trendy hipster house on Craigslist and then brought it home excitedly to show Ryan who paused for a long moment then said carefully "I love you and I trust your vision." He just looked at me quizzically when I enthused "It's from *FOUR HANDS*!" Now he's just as in love with it as I am.) 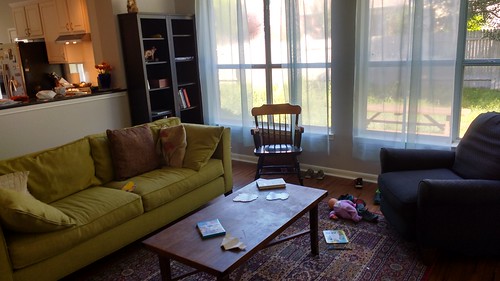 MY BOOKS ARE OUT OF STORAGE! 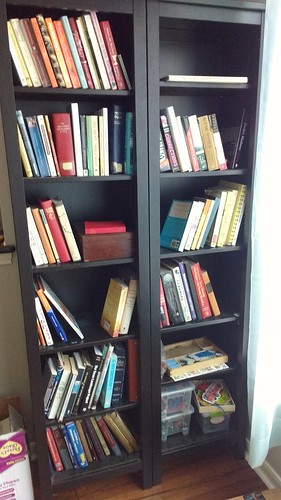 WE HAVE CURTAINS IN THE BEDROOM (thanks to me, because Ryan was working at the other house and I got sick of undressing in, basically, an aquarium every night). 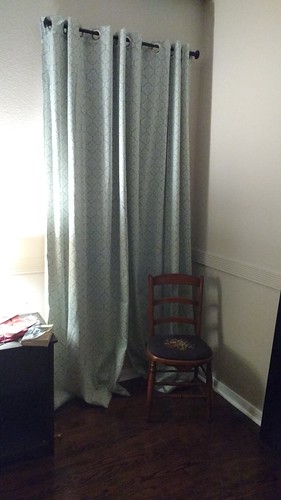 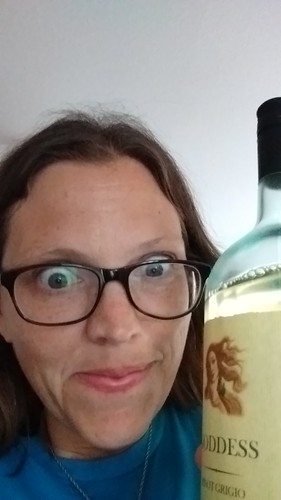 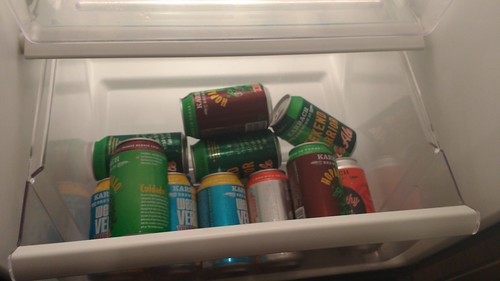 The convalescent was getting super grouchy on moving day so we took him out to the porch to watch birds and he came back in A NEW PERSON. Fresh air, it's a thing. 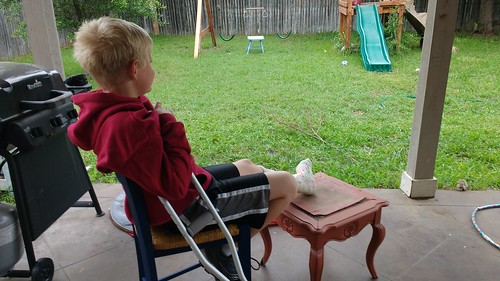 I packed my wedding dress, which seems to have shrunk in the closet. 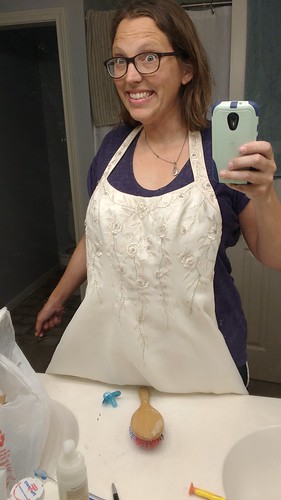 Several friends admitted to thinking this was an apron when they scrolled past the picture in my FB feed, which, admittedly, it kind of is now.

First breakfast in the new house! 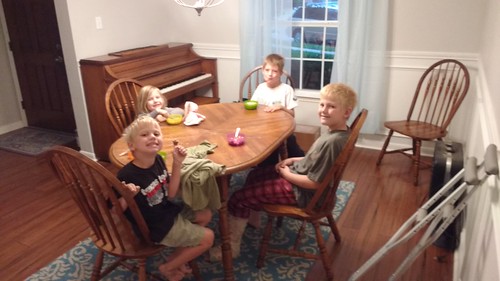 Table has now been moved back into the kitchen because OMG STOP EATING CEREAL OVER MY BEAUTIFUL CRAIGSLIST RUG!! Other table currently at the old house for staging purposes

I turned in my grades on Tuesday, which I completed DURING MY LAST EXAM by grading each exam AS IT CAME IN because, as you know, this week has been COMPLETELY INSANE, and immediately went to eat a giant BLT with a fried egg on it and a glass of sangria, because OBVIOUSLY. 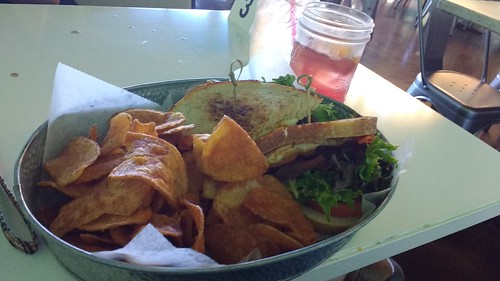 And in other news, Charley got his cast off and ditched the crutches and his mood is 6000% improved. 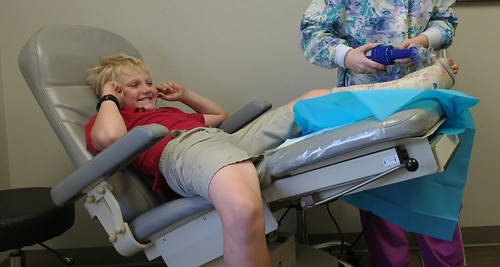 That's all for now. More later on how the new house echoes so much I can hear Ryan opening a beer in the kitchen from my bedroom and how we socially aggressived the neighbors and now they are our friends.
Posted by Becca at 8:37 AM