We made Charley an appointment with a podiatrist on the advice of my friend, who is a podiatrist, and because Charley's ankle was still giant and swollen and slowly turning a deep shade of red and also because he couldn't put any weight on it still and it just didn't seem like it was going to get any better by itself as the PCP had suggested *might* happen. Having been through the thumb experience this fall also helped. Charley's skeletal system has had a rough year. Yesterday was the appointment. I forgot to ask anyone to pick up the younger boys, so that meant I spent two hours yesterday trapped in a tiny room with three kids who had been cooped up all day, one of whom had to take off his boot and could not be jostled.

The office was set up for older adults so after they picked out a nursing home for me from a catalog we amused ourselves by doing field sobriety tests, which I'm pretty sure James failed. 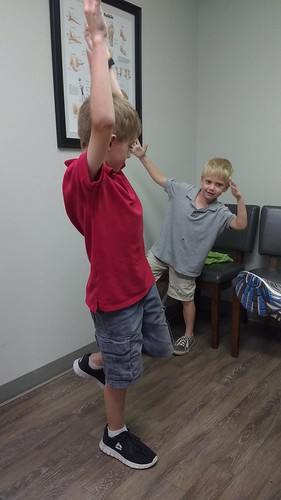 The doctor came in eventually, took a cursory look at his ankle, which was swelling wildly having been freed from the boot, and ordered another set of xrays. Later, he called me into the xray room to show me the huge crack in Charley's ankle bone (huge to me, anyway, according to him it's extremely common and caused by something called "horsing around" and "being a 10 year old boy"). He asked me if I wanted him to put a cast on it or keep him in the boot. While he went over the benefits of cast versus boot I could hear a ruckus break out in the room behind me. There was loud giggling, shrieking, mysterious thumping and banging noises, and some unsettling crashes.

The doctor had just said "Boys his age can be fairly rough and tumble, so I'd recommend the cast" when I realized the sounds were coming from OUR EXAM ROOM. 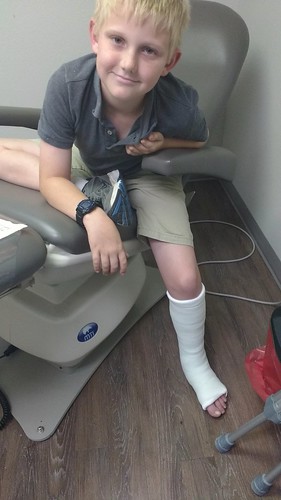 He had to sit in this position and let the cast dry for an interminable ten minutes. We watched cat videos to pass the time. The doctor laughed hard every time a random yowl came out of my phone. Chair in "ready for liftoff" position because Wes was goofing around with the controls

He'll be in the cast for two weeks and then the boot for another one to two weeks. Summer is SAVED!

Getting around our house on crutches is not convenient at the moment because we had to get ready for the painter. Also our TV is put away. Repeat: OUR TV IS PUT AWAY. So there are some challenges. 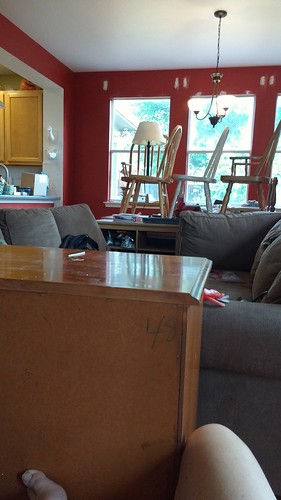 But at least Charley's bedroom is already on the first floor.
Posted by Becca at 11:02 AM