Moving out and forward

One exciting thing about moving to a new house is the opportunity to confront your slothful housekeeping of the last nine years up close and personal, in your pajamas, at nine o'clock at night, while standing barefoot on the kitchen counter scraping greasy buildup off the upper cabinets with Pine Sol as you facilitate a kid who needs to verbally process through his entire day.

Never again. I will never be this disgusting again. I vow, even though I remember clearly making exactly the same promise to myself as I scraped grease off the upper cabinets at my LAST house (there was also the matter of the dead mouse that began to decompose under our electric skillet that made the house smell like death for the agent open house and that I discovered while home alone with baby Charley one night after making pancakes and immediately called Ryan to come home and deal with).

I have some Feelings about this move that I like to spend the hours between two and three o'clock in the morning considering rationally. One is that we don't technically *need* a bigger house. After all, look at the Greatest Generation! They managed to raise families of seven in glorified shipping containers with a single bathroom and three kitchen cabinets!

When I trot this argument out my friend Heather likes to remind me that it was also acceptable to hit your children into submission (which certainly meant less bitching about bedtime/room sharing) and most women were on tranquilizers. I would add a third thing, that it was perfectly acceptable to send your kids out to play for nine hours a day while you played cards and drank liquor with the other women on your street (now you can only have craft beer while sitting on your porch for an hour or two before you have to force someone to do homework or make a meal or something, how times have changed!). Who needs a game room when you have the great outdoors?! I also like to reassure myself that my grandparents, models of New England pragmatism, converted their attic into two more bedrooms and a third bathroom, giving their house exactly the number of bedrooms we are moving up to SO THERE.

I love our current house. We've lived here for nine big years. Three new babies. A PhD. New jobs. Good patches. Bad patches. It started out sort of neo-colonial traditional with beige carpet and formal furniture in the dining room that was very important to me. It evolved over time to have a kind of funky coffeeshop vibe, with a huge worn out butcher block table in the dining room, an orange floor, green kitchen walls, a five foot tall microscope cabinet acting as the focal point of the living room. Our old tastes and expectations chipped away and molded by the experience of having a child in crisis, a newborn, and a stressful job situation all at the same time. Questions about what *should* a house look like yielded to wanting our house to be comfortable and functional for us. And that meant an orange floor, a green kitchen, and a giant butcher block table covered in paint stains and scratches in place of our elegant dining room furniture.

It's hard to leave this incubator for our family behind, but this is going to be a good thing for us. It's cute when the kids use the six foot patch of floor space behind the kitchen counter to play magnatiles now, but I'm having trouble envisioning a fourteen year old Wes hanging out back there with his buddies. At some point one kid might want to read a book while another kid might want to watch TV! Or do homework while someone else practices piano! Or *I* might want to have friends over and put on a movie for the kids and offer the adults someplace to sit that is not the kitchen floor! The kids are staying up later and later, we cannot continue using the living area in shifts like we have been.

I'm going to miss our wonderful neighbors and our orange floor and the cubbies I built for the kids' backpacks in the kitchen (that I will be recreating in the new house). I'll miss our green walls and my garden beds and the projects Ryan has done to streamline our life in this house.

But this is a LOT OF STUFF for a living room, right? And I know what you are thinking: get rid of some stuff! We are down to the minimum. The next thing to go is one of the children. I don't know why every child needs his own TV-watching quilt, to be stored in the corner of the living room in a giant hap-hazard pile, but they do. They just do. Even in August. The rollerblades have to go in the living room because there is no room in the garage because of all the bikes and the lawnmower and the thrift store couch they destroyed that we're having trouble discarding. The games and cards and dominoes also have to go in the living room BECAUSE IT'S THE LIVING ROOM. Just like the dishes and pots and pans and lunchboxes and science experiments all have to go in the kitchen, which is the only other non-bedroom space on the first floor now. It's been working for a long time and it's kind of starting to not work. And they just keep getting BIGGER. 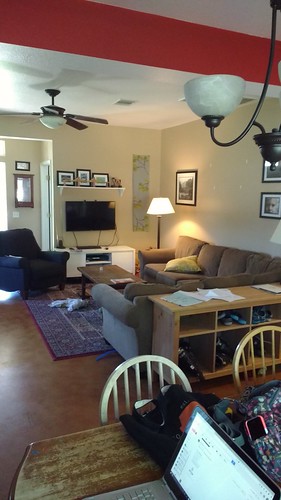 There was an old woman who lived in a shoe.

Anyway, we found a good house for a price we could afford that is closer to the kids' school and both of our works. It's on a bike trail. It's close to the pool. And we move at the end of the month. We told the kids on Saturday afternoon. It...did not go well. Wes started sobbing and moaning the name of his buddy next door. Charley ran to his new room and pushed his desk up against the door then wrote a note that said "Y'all are cray cray". He ripped the head off an action figure and left it on the counter with a note that said "YOU!" with an angry face. 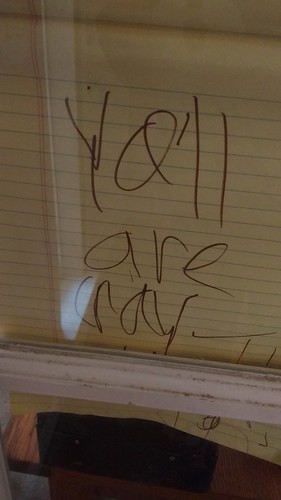 So we went to the house and parked in the driveway and walked around to the back yard. Wes made friends with the kid next door and they threw a football around. The big kids rode their bikes on the trail. We walked to the playground. They were OK by the time we got home. Charley put the head back on the action figure and brought it to show us. 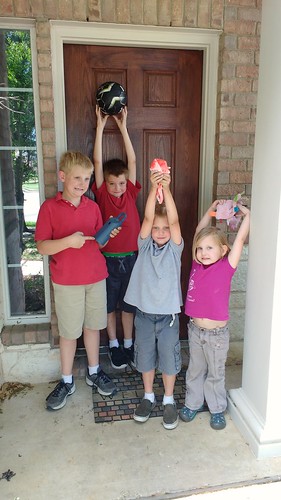 Checking out the new front door for first day of school pics.

We bought a pretty journal for the kids to write down their favorite house memories and a photo album so we can keep some pictures. We're letting them pick out area rugs for their rooms (which all have wood floors and, one day, paint colors. We're keeping up a full social calendar of musical rehearsals and birthday parties and Scout campouts and homework and piano lessons, trying to limit the ridiculous amounts of life upheaval to just Ryan and me. We are spending our evenings cleaning and fixing and packing around the edges so we can put our own house on the market close to the time we leave (funny story: After the Flu Outbreak we had pretty much given up on the idea of buying this particular house because life just seemed too overwhelming at the time. Then we had this horrible day that involved poop and fighting and poop on furniture and fighting with kids and did I mention poop? And Ryan called me the next morning and said "You know what? I'm OK with moving out before we sell this house, because there is NO EFFING WAY we are going to list the house with these kids still living in it.").

We're hiring people to do the heavy jobs like painting the stairwell and the living and dining room and installing tile and carpet, so we just have to clean and get stuff to a storage unit to make room for them. So look forward to lots of complaining about *that*.

This post was awesomely written! Congratulations on the new house! I've started trying to picture teenagers in my house and I nearly had a panic attack

As someone who is about a month ahead of you in this process but has half as many kids, I wish you much luck and will soon buy stock in your local liquor store. #solidarity